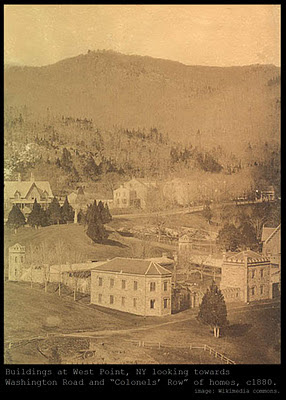 Here's a link to a very thought-provoking interview with Sheldon Norberg, author of Healing Houses: My Work as a Psychic House Cleaner. The interview takes place on New Dimensions Radio, hosted by Justine Willis Toms. Mr. Norberg describes his work in the interview, along with some amazing examples, involving the "energy signatures" in houses which he is called on to examine and redirect -- in his words at one point towards the end of the interview, "meeting these energies and shifting them." Mr. Norberg's website can be found here.

It is extremely worthwhile to hear the perspectives of someone who is involved in such work, and to hear the types of words he uses to describe what he perceives in his practice. For instance, at one point fairly early in the interview (around the four-minute mark), he says:


When I talk about ‘energy signatures’ in my book, I’m saying that if you are trying to perceive the person’s energy or the energy of a certain event, you will feel that it has a certain frequency, and when we talk about, working in the psychic energy world, we talk about the frequency of different people’s energy, just as you or I are actually oscillating energetically at slightly different wavelengths, and when you feel, say, the difference between somebody loving you and somebody hating you – very, very obvious when you come in contact with a person who is emanating one of those two frequencies [. . .].

Right away, this seems to bring to mind some subjects we have explored in previous discussions on this blog, such as "Every man is an island" and "Why do we listen to beautiful music about heartbreak and misery?" In those posts, we examined some of the work done by R. A. Schwaller de Lubicz and John Anthony West which indicates that the ancient Egyptians were well aware of the vibrational aspects of human beings and of structures and spaces, and that they consciously incorporated this knowledge into everything they did and built. Mr. Norberg's work appears to reinforce these findings, especially in his discovery that human spaces continue to have strong energy resonances which are influenced by the activities and the energies of those who live there (or have lived there).
The statements made by Mr. Norberg above also appear to resonate with the discussion in the post entitled "Some implications of recent studies on the plasticity of the brain," in which we found that the Dalai Lama places a great deal of emphasis on the daily practice of directed compassionate mental energy and the development of "warmheartedness." We saw that some scientists believe that this kind of mental energy can actually change the structure of the brain, and that those who have practiced tens of thousands of hours of meditation are able to project "high frequency brain activity called gamma waves" which can actually be picked up on scientific instruments.
The implications of some of this seems to be that we should be careful and conscious about what kind of frequencies we are practicing and putting out, because they can have a real impact on our own brains, and also on our living spaces! How's that for an eye-opening thought?
Elsewhere in the interview, Mr. Norberg mentions some other interesting knowledge he has about the earth and its magnetic field, and our ability to perceive it and interact with it, saying:

Essentially I try to start with the grounding practice because that’s kind of the core of everything.

That is where I am tying to align myself consciously, magnetically, to the earth, because the earth is a magnetic structure, and it’s sending off a magnetic field at all times, and in different places – I mean, that’s one of your things about different spots on the earth – folds of the earth create very different magnetic fields, and your compass can go off by several degrees in different places, so the feel, I think, of those places may be distinctly different. And if you’re aware where there’s about three grams of iron in the human body at any given time in your bloodstream, that’s how it is binding the oxygen to the hemoglobin, and I think that we as living beings are magnetically conscious, although we are so busy with upper cortex activity that we forget.

This discussion resonates with some of the things that the builders of Stonehenge and Avebury Henge apparently knew, which we discussed in the previous post entitled "Magnetic Polarity at Avebury Henge." It also appears to give some credence to the recommendations given by Swami Buaji about the direction of one's body when sleeping, discussed in "Does the direction you lay your head down to sleep matter?" At the end of that segment, Mr. Norberg mentions a study which was published in the Proceedings of the National Academy of Sciences of the United States of America which suggests that cows and two different species of deer can sense terrestrial magnetic polarity and align their bodies with it.

Even further, the interview raises some other questions that intersect with subjects we have discussed previously as well. For example, he states in the interview (around the 22-minute mark) that he believes that about ten to twelve percent of the clients who come to him for help with their houses are actually dealing with what could be called a ghost (what he says he would describe as "the remnant energy or the projected energy of a being from wherever we go when we're not here anymore, to maintain a presence in its previous form with its previous desires, to either hold on to the life it had here, to communicate something that it was unable to while it was here [. . .]").
This discussion from someone whose life work involves shifting energy patterns in houses should not be dismissed out of hand. However, it would seem that such testimony raises serious problems for conventional Darwinists. Is it possible to argue that a being could evolve -- through a process of completely materialistic evolution -- which is capable of projecting energy after its physical death? If some little-known group of Darwinists are prepared to argue that this is a possibility, do they speculate that somehow "survival of the fittest" enables this? How exactly does natural selection help those members of the species that are able to have some sort of "life after death" to survive?
If natural selection works by enabling those with favorable mutations to survive and breed, how do those which have a propensity for life after death participate in this Darwinian mechanism more successfully than those which don't, since their only advantage seems to kick in only after the breeding is over (when we can no longer argue for any kind of the "evolutionary advantage" which Darwinists like to talk about)? And, can we really argue that there is some kind of cellular mutation in the DNA which produces a spirit that can live on after death? The very subjects which Mr. Norberg has some personal experience in should raise some real questions among anyone who has been led to believe in Darwinism, as we mentioned in this previous post as well.
It is perhaps possible to argue that creatures who are extremely highly evolved could have developed such powerful frequency vibrations that the effect of those vibrations continue on after their deaths, although that would seem to be a pretty difficult argument and one that I am not aware of any actual Darwinists making publicly. For starters, there would be no evolutionary advantage to such resonance (after death, at least, although a Darwinist might argue that it has some evolutionary advantage in life). When exactly, between vertebral fish like cephalaspis and modern humans, did such frequencies in the brain begin (when did they become strong enough to produce "signatures" that would go on after physical death of the organism?)
The bigger problem is the argument that creatures with such amazing features as gamma-wave activity which can be enhanced by meditation, or with iron in their hemoglobin which binds the oxygen to their red blood cells and can perhaps feel the earth's magnetic field as well, are actually the product of mutations and natural selection in the first place (did all the creatures who tried to bind oxygen with other elements just die out, until some mutations stumbled across iron as an oxygen-binding agent?) We have discussed some of the insoluble problems of the Darwinian hypothesis in other previous posts (see here and here).
Above is a photograph from around 1880 of a row of houses on the military post of West Point, Washington Road. These stately mansions (all of them three stories) are still there today, and are assigned to the full-bird colonels who are the heads of the various departments (and to the Dean, who is a brigadier general -- his house is on the far left of the row). For this reason, this row of houses is sometimes called "Colonels' Row" or "Professors' Row." I won't say that I have heard a full colonel of Infantry tell me and a group of others about phenomena in his home there, but if I had, it was a full colonel who had lived in that home for many years and whose descriptions were backed up by his wife.
All of this is information about which Shakespeare might say, "There are more things in heaven and earth, Horatio, than are dreamt of in your philosophy." 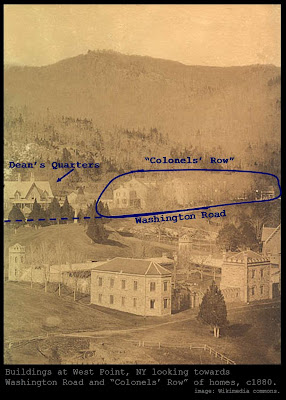