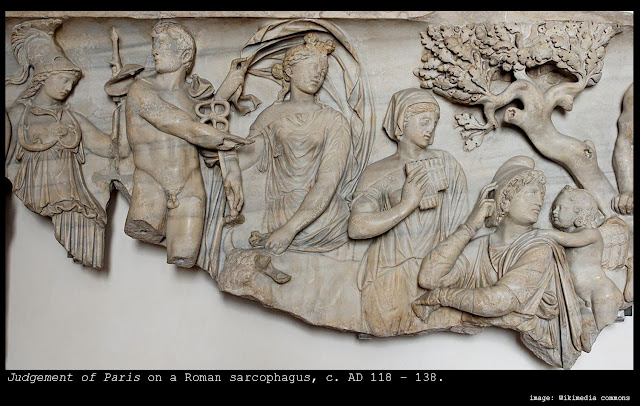 (mobile readers please scroll down to read the post)


The Judgement of Paris is a well-known ancient myth, in which three goddesses -- Hera, Athena, and Aphrodite -- contend for a golden apple and the title of most beautiful, to be judged by Paris.  To sway the judge of the contest, each offers a gift should she be chosen: Hera offering rulership and power, Athena fame and heroism, and Aphrodite offering the most beautiful woman in the world as a lover.  Paris' choice leads to the Trojan War, as the most beautiful woman in the world (his choice, of course) is already married.

Surviving accounts from many ancient authors depict the Judgement of Paris, stretching back at least to the sixth or seventh century BC.  A version of the Judgment of Paris takes place near the climactic point of the Golden Ass (or the Metamorphoses) of Apuleius, near the end of Book X.  In this case, the famous judgement is enacted in the arena, and Apuleius has his protagonist Lucius (still trapped in the form of a donkey) relate the deciding moment, along with commentary on the decision:

Presently the flutes began sweetly to harmonize in the honeyed Lydian modulations, which thrilled and relaxed the audience.  But that was nothing to the thrill when Venus began to dance quietly in tune with the music, making slow delaying steps, sinuously bending her body, and moving her gracious arms.  Every delicate movement that she made was answered by the warbling flute -- one moment her eyes were gently drowsy; the next moment they flashed passionately; and sometimes she seemed to dance with her eyes alone.  As soon as she had come near the umpire, she was perceived to promise by her tokening arms that if he selected her as winner she would grant him as wife the most beautiful woman in the world -- a woman like Venus.  Gladly then did the Phrygian youth hand her the golden apple, the symbol of her unconquerable beauty.

O why do you wonder if those dregs of humanity, those forensic cattle, those gowned vultures, the judges now sell their decisions for cash?  Even at the world's infancy a bribe could corrupt judgement in a question agitated between gods and men; and a young fellow (a rustic and a shepherd) appointed judge by the counsels of great Jove sold the first judicial decision for the lucre of lust, thereby entailing damnation on mankind.  232, translation by Jack Lindsay.

The concluding comment by Apuleius (through Lucius) is very interesting --  it seems that he is blaming the "damnation" of mankind on the Judgement of Paris, or more specifically on the choice of Paris to be captured by lust for beauty.

In an essay entitled "Prudentia and Providentia, Book XI in Context" (beginning on page 86 here) Luca Graverini of the University of Siena at Arezzo argues that The Golden Ass is in many ways a study in judgement, and more often than not, a study in bad judgement (most often the bad judgement of Lucius), saying "Lucius is like an Odysseus without his traditional prudentia, an Odysseus who gave in to the enchantments of the Sirens" (93).

If so, and if (as is fairly apparent from the entirety of the Golden Ass) the tale is an exploration of the human condition, trapped in the form of a brute and struggling to transcend the ridiculous and often violent conditions he finds all around him, then it is quite likely that Apuleius, who brings the Judgement of Paris into his tale at this climactic moment, saw it as something more than just a tale of the choice between three different goddesses.

Given the mystical aspects of the tale, particularly at the end immediately following this arena scene, it is not too much of a stretch to say that the Golden Ass is probing the nature of the psyche itself (given that the tale of Psyche and Eros also occupies a very prominent and central point in the narrative) -- in other words, examining the question of how our psyche or animating and spiritual aspect came to be enmeshed or enfleshed in a physical existence, and what our purpose is while we are in this material world.

That this judgement concerns every human being and not just some individual named Paris who lived centuries ago is also intimated by the fact that the Judgement of Paris is usually depicted as taking place upon a mountain, or even within a mountain -- which is often a mythological way of saying within the dome-shaped "mountain" which every person possesses; in other words, the head.  Most often, the Judgement of Paris is said to take place on or within Mt. Ida, and indeed in Apuleius' version a wooden mock-up of Mt. Ida is present in the arena to make this clear.

Santos Bonacci would point out that the human body has a corresponding Ida, along with the Pingala, which are the intertwined channels which convey consciousness within the microcosm of the human body.  In fact, the Ida (appropriately enough for the Judgement of Paris) is considered to be the feminine of the intertwined Ida and Pingala, while the Pingala is considered to be solar and masculine.

All of this is worth deeply considering and meditating upon.

It is interesting to conclude by noting that while Lucius seems to condemn the decision of Paris, it is the goddess Isis who rescues him in the resolution of the conflict of the tale in the next chapter, in which he is finally granted the ability to shed his beastly hide and proceed along a path of successively greater understanding. 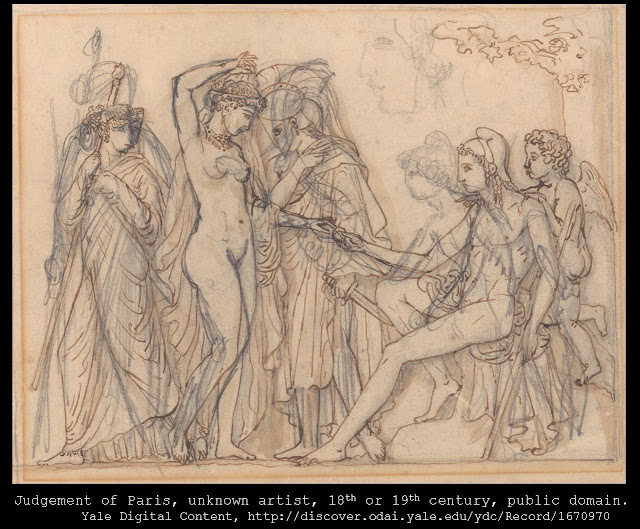 Posted by David Warner Mathisen at 12:51 AM