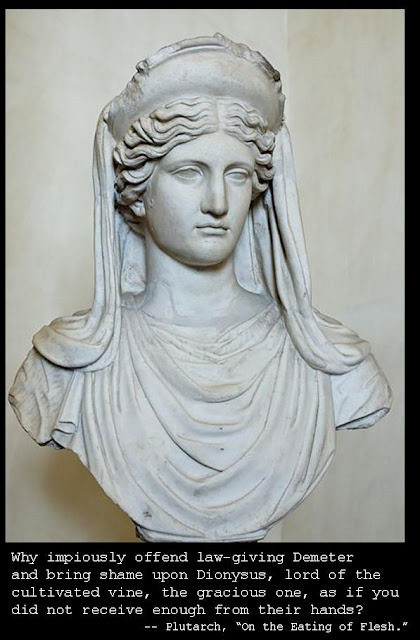 Some of Plutarch's arguments include the assertion that the eating of flesh is unnatural, that it is cruel, that it is unnecessary, that a large amount of the meat which cost another being its life is routinely wasted and left uneaten, that it is unhealthy and leads to grossness of body and mind and spirit, that animals raised for food are sometimes degraded and tortured in most inhumane fashion, and finally that we should be cautious of killing and eating animals in case there is any truth to doctrine of reincarnation or what he calls the possibility of "the migration of souls from body to body" (even if we are not convinced of this teaching, he says, the uncertainty should urge us to err on the side of caution).

In addition to all of the above arguments, one argument which comes quite early in the first discourse is the argument that the slaughter of animals for food betrays a lack of faith and gratitude to the gods responsible for the provision of bread and wine: Demeter and Dionysus.  Plutarch writes:

Why slander the earth by implying that she cannot support you? Why impiously offend law-giving Demeter and bring shame upon Dionysus, lord of the cultivated vine, the gracious one, as if you did not receive enough from their hands?

This is a very interesting argument, and one which should give us pause even in our jaded modern world.   While many modern readers might wonder how this argument carries any weight with moderns who do not believe in the existence of beings named Demeter and Dionysus, we should be careful not to dismiss this argument too quickly.
First, it is quite possible that the ancients had a much more sophisticated understanding of the "powers" responsible for the production of bread and wine, which they named gods (or, in ancient Egypt, the neters or neteru).  Second, it is very possible to translate this argument of Plutarch's into whatever personal faith one may happen to believe and see that his caution about having a lack of faith and a lack of gratitude might indeed be worth considering on many levels.

Even setting aside for the moment the central thesis of Plutarch's argument, which questions the necessity and morality of killing animals for food, this "faith-based" portion of his argument would seem to apply quite fittingly to the debate surrounding genetically-modified plants for food.  We might modify Plutarch's argument somewhat and update it for this very important modern issue and imagine him asking:

Oh blessed and beloved of the gods, you who live now, what an age has fallen to your lot wherein you enjoy and assimilate a heritage abounding in good things! How many plants grow for you! What vintages you gather! What wealth you may draw from the plains and what pleasant sustenance from trees! Why, you may even live luxuriously without the alteration of plants in order to more readily spray them with insecticides and herbicides. But you who live now, what madness, what frenzy drives you to the pollution of mixing bacterial DNA and viral triggers into your corn and your canola, you who have such a superfluity of necessities? Why slander the earth by implying that she cannot support you? Why impiously offend law-giving Demeter, as if you did not receive perfectly good natural corn and soybeans from her hands? Are you not ashamed to mingle domestic crops with bioengineered monstrosities?

As we approach the holiday of Thanksgiving, in which we remember the fact that we should not and must not take our food for granted, and in which we reflect with thankfulness upon the abundance that we have been provided by a power that works through nature to meet our physical needs, the questions of Plutarch seem startlingly appropriate.
Interestingly enough, the authors of Hamlet's Mill find an ancient connection between the goddess Demeter and the mythological cornucopia, which is also a common Thanksgiving motif in the United States.  They write:

And here there is a proposition to be made.  In order to evaluate it, one has to consider the fact that alpha Aurigae is Capella, the Goat.  This remarkable figure was the nurse of infant Zeus in the Dictaean Cave, and out of her skin Hephaistos was later to make the Aegis: Amaltheia.  Capella-Amaltheia's Horn was the Horn of Plenty for the immortals, and the source of Nectar and Ambrosia.  Mortals called it "second table," dessert so to speak.  But there are two shreds of Orphic tradition which seem to be revealing, both handed down to us by Proclus.  The first says that Demeter separated the food of the gods, splitting it up, as it were, into a liquid and a solid "part," that is, into Ambrosia and Nectar.  The second declares that Rhea became Demeter after she had borne Zeus.  And Eleusis, for us a mere "place name," was understood by the Greeks as "Advent" -- the New Testament uses the word for the Advent of Christ.  Demeter, formerly Rhea, wife of Kronos, when she "arrived," split up the two kinds of divine food having its source in alpha Aurigae.  In other words, it is possible that these traditions about Demeter refer to the decisive shifting of the equinoctial colure to alpha Aurigae.  259.

In order to follow this line of argument (the authors of Hamlet's Mill are somewhat famous for leaving out some of the "stepping stones" that might help their readers to follow them from one side of the river to the other side, so to speak), it is helpful to understand what a "colure" is (this is explained, with numerous diagrams, in my actual Mathisen Corollary book), as well as to understand the mechanism of precession (which is described in this video using a metaphor of a dining room, which should be helpful).

The short translation of their argument (I believe) is the assertion that the myths linking Demeter to Rhea (the wife of Kronos or Saturn, who ruled the Golden Age, and who is associated with Orion which is the constellation associated with Osiris) help explain her connection to the constellation of Auriga the Charioteer.  As this previous blog post explains (and shows with some diagrams), the action of precession slowly replaced Gemini and Orion (the rulers of the Golden Age) with Auriga and Taurus (who are located ahead of them in the sky -- preceding them, which is the origin of the word "precession), and this is why the authors of Hamlet's Mill spend so much time on chariot myths (such as the myth of Phaethon), which also relate to the end of the Golden Age brought about by the action of precession.

Thus the tradition that Rhea became Demeter who was then associated with the brightest star in Auriga must point to this transformation as taking place at the end of the Golden Age.  Demeter is associated with "separating" or "splitting up" the food of the gods -- she divides things up (note that in the most well-known myth about Demeter, she is responsible for "dividing up" the year into winter and summer).  She divides and she measures out (her name De-meter incorporates both of these functions, as the prefix di- has to do with division or "two-ness" and the word "meter" has to do with measuring; note that her former husband Kronos is also associated with "giving the measures").

Thus, through a rather esoteric line of reasoning, we can see the importance of Demeter's connection with the brightest star of Auriga, the star that was associated with the cornucopia or Horn of Plenty.  So Plutarch's argument (where we note that he calls Demeter "law-giving Demeter," which could also be translated as "rule-giving Demeter" or "measure-giving Demeter") that eating unnatural foods represents lack of faith and gratitude to Demeter, the giver of the Horn of Plenty, carries even more significance and symbol.

It is certainly an argument that bears careful consideration.  Happy Thanksgiving!
Posted by David Warner Mathisen at 11:59 PM