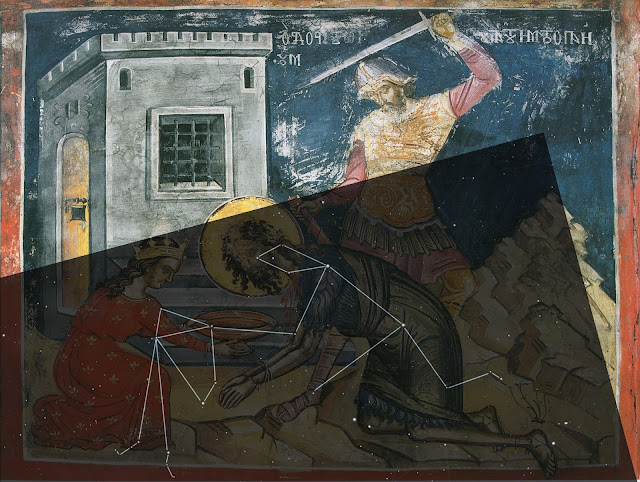 image: Wikimedia commons (link); original image reversed (right to left), and then superimposed with unaltered screenshot of the stars of Aquarius from the planetarium app Stellarium (outlines of Aquarius as suggested by the system of H. A. Rey drawn between the stars without any alteration of star locations).


I am continuing to add features and new material to my new website at "Star Myth World (dot com)."

It's a work in progress, so please continue to check back frequently!

As I've been working my way through, adding links to discussions of representative Star Myths from around the globe in the section entitled "The Myths," I am in some cases adding new diagrams and additional discussion, based on new perspectives that I have now which I may not have fully appreciated the first time I explored them in the pages of this blog.

This happens to be the case in the discussion of the very important figure of John the Baptist in the gospel accounts of the New Testament.

John the Baptist is found in all four of the canonical gospel texts. He is described as the one who comes before the Christ, to make the way straight (as prophesied in the text of Isaiah chapter 40).

But John's role is to leave the stage as the one who John says "cometh after me" who is "mightier than I" arrives (see Matthew 3: 11, and also Luke 3: 17). Indeed, in Mark chapter 6 and also Matthew chapter 14, we learn that John is arrested and then beheaded in an arbitrary execution.

As discussed in a previous post exploring the significance of John the Baptist, this execution is almost certainly celestial in nature, and is an "embodiment" in myth of the motion of the heavenly cycles of the stars -- specifically in this case the motion of the constellation Aquarius, the Water-bearer, who almost certainly plays the role of the Baptist (appropriately enough, as one who "pours water" in the heavenly realms).

The episode in the New Testament describing the beheading of John the Baptist, as with all the other elements of the John the Baptist story in the ancient texts, can be seen to come directly from the position and orientation of the constellations themselves.

Before the head sinks completely below the horizon, it will in fact be seen to sit upon the western horizon: the head of John the Baptist on a platter!

Other details from the texts themselves are also understandable when we look at the orientation of Aquarius in relation to other important constellations which "come after" Aquarius in the heavenly procession.

As we can see very clearly in the diagram below, the head of Aquarius looks directly towards the zodiac constellation of Aries the Ram -- which is why John in the scripture is described as seeing Jesus coming towards him, prompting John to declare, "Behold the Lamb of God, which taketh away the sins of the world!" (John 1:29).

Similarly, the texts in the accounts as recorded in Matthew and Luke have John the Baptist declaring that "he that cometh after me is mightier than I" and that this one who "cometh after" is also one "whose fan is in his hand" -- descriptions which can be seen to fit the constellation Orion, who does indeed come after Aquarius and does indeed bear aloft a "winnowing fan" in his hand.

Finally, in John 3: 30 is the famous verse in which John the Baptist announces very bluntly: "He must increase, but I [must] decrease."

This verse obviously has spiritual connotations, but it is also an accurate declaration regarding the relative positions of the constellations Aquarius and Orion as shown in the above star chart.

John the Baptist, corresponding to Aquarius above, is decreasing (he is going down in the sky) -- even as Orion is rising. You can see in the star chart above that even as Aquarius is sinking below the horizon, Orion is still ascending towards the zenith or transit-line that I've drawn arcing upwards from due south on the horizon (and back over our heads to pass through the north celestial pole). This line is the highest point on the arc that the stars make as they circle up from the eastern horizon and then back down towards the western horizon, just as this line is the highest point on the sun's daily arc through the sky as well.

Now, if we were reading the scriptures in a primarily literalistic approach (as historical records of the words and actions of terrestrial, literal personages from long ago), we might see some spiritual angles to what John is saying, but still read it primarily as a statement by a literal John the Baptist that he intends to leave the stage now that Jesus has arrived on the scene.

But, based on previous discussions of esoteric interpretations we've explored of some of the Gnostic texts uncovered in the Nag Hammadi library -- such as the previous discussions of the relationship between Thomas and his divine twin, Jesus (here and here) -- I believe it is very possible that the relationship between John the Baptist and his divine cousin may be conveying the very same (or close to the same) esoteric message.

It may be that the motion of the two figures in the heavens (Aquarius sinking down, Orion rising up) and the actions of the two characters in the story (John leaving the stage, Jesus ascending as his divine origin is revealed) is actually describing something that each of us is supposed to be working towards in our own lives -- by diminishing the "doubting voice" of the "Thomas Self" as we become more and more attuned to the Higher Self.

Indeed, many daily disciplines and practices which appear to have been developed in ancient times, or perhaps handed down to humanity by some now-unknown source, may have as one of their primary goals this very same result which is being allegorized or esoterically conveyed in the words of John the Baptist -- disciplines such as meditation, chanting, Yoga, rhythmic drumming, certain martial arts, forms of what is today usually referred to as chi gung, and many others.

Interestingly enough, the very same metaphor of the "winnowing fan" plays a significant role in the ancient Greek epic of the Odyssey -- a poem I explore in detail in my latest book, Star Myths of the World, Volume Two (which is all about the myths of ancient Greece).

It should be very clear by now that the myths and scriptures of humanity, from around the globe, can be shown to be built upon celestial foundations.

It should also be becoming clear that as we begin to understand the metaphorical language used by these ancient texts and sacred stories, this understanding can help us to hear (in a completely different way) the messages that they are speaking to us across the centuries and across the millennia.


Posted by David Warner Mathisen at 1:29 AM