Blessings, food, economics, and libations to the gods 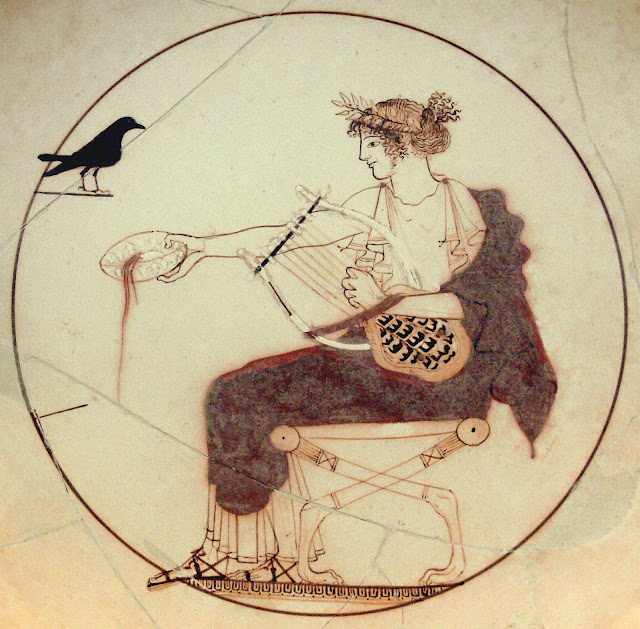 
Above is a striking image from an ancient artist depicting the god Apollo in the act of pouring a libation of wine, while a raven observes (evoking the spirit world, even as Apollo of course inhabits the realm of the gods, being a god himself).

In addition to evoking the spirit world, I believe that the raven may be included in this ancient artwork because Apollo in this image has certain elements corresponding to the posture typically associated with the constellation Virgo, including a seated position with one arm dramatically extended. The constellation of Corvus the Crow is closely associated with Virgo, and even though it is located on the opposite side of the constellation Virgo from the side on which the raven is depicted in this image of Apollo pouring a libation, this pairing definitely evokes the celestial figures of Virgo and Corvus, and thus the Infinite Realm or Spirit Realm.

The ancient myths use the stars and heavenly figures to convey powerful truths to us about the importance of, and our dependence upon, the Invisible Realm, the Infinite Realm, even in the most mundane aspects of our daily life.

In fact, the act of pouring a libation, which is described frequently in both the Iliad and the Odyssey, was done at the beginning of a meal, as a way of acknowledging that the food and drink which we enjoy, and upon which we depend for the very sustenance of our lives, is itself a gift from the gods, and that it flows down to us from the spirit world in a very real sense.

The invisible spark of life which causes the grain to grow from a seed into the wheat from which we make our bread, or which causes the vines to grow which produce the grapes which will later be turned into wine, must come from the Invisible World. It is not a product of the material realm -- and we are dependent upon the continued infusion of this purely physical world with the invisible, mysterious and divine outpouring which overflows from the spiritual world for the growth of the plants and vines and trees which sustain all life on earth.

The pouring out of libations described in the texts which have survived from ancient Greece seem to express the recognition that all food and wine (or spirits) are gifts from the divine realm.

Here are two examples from the Odyssey -- first, when Telemachus (along with the goddess Athena, disguised as his childhood guardian Mentor) arrives in the land of Nestor and his family, in sandy Pylos:

There sat Nestor among his sons as friends around them
decked the banquet, roasted meats and skewered strips for broiling.
As soon as they saw the strangers, all came crowding down,
waving them on in welcome, urging them to sit.
Nestor's son Pisistratus, first to reach them,
grasped their hands and sat them down at the feast
on fleecy throws spread out among the sandbanks,
flanking his brother Thrasymedes and his father.
He gave them a share of the innards, poured some wine
in a golden cup and, lifting it warmly towards Athena,
daughter of Zeus whose shield is storm and thunder,
greeted the goddess now with an invitation:
"Say a prayer to lord Poseidon, stranger,
his is the feast you've found on your arrival.
But once you've made your libation and your prayer --
all according to ancient custom -- hand this cup
of hearty, seasoned wine to your comrade here
so he can pour forth too. He too, I think,
should pray to the deathless ones himself.
All men need the gods . . ." 3. 36 - 55. Translation by Robert Fagles.

And again when Odysseus arrives among the Phaeacians:

As long-suffering great Odysseus ate and drank,
the hallowed king Alcinous called his herald:
"Come, Pontonous! Mix the wine in the bowl,
pour rounds to all our banqueters in the house
so we can pour out cups to Zeus who loves the lightning,
champion of suppliants -- suppliants' rights are sacred."
At that Pontonous mixed the heady, honeyed wine
and tipped first drops for the god in every cup,
then poured full rounds for all. And once they'd poured
libations out and drunk to their hearts' content,
Alcinous rose and addressed his island people . . . 7. 210 - 220.

It is also noteworthy that, when Athena first arrives at the house of Odysseus, where Telemachus and Penelope are basically held hostage by the violent, destructive suitors, there is a feast going on, but no libations to the gods are described at all.

The practice of acknowledging, prior to a meal, our dependence upon the divine for every item of food that we eat and of outwardly proclaiming our gratitude for these gifts is traditionally known in English-speaking countries as "saying grace" or "giving the blessing." These terms are appropriate, in that the word "blessing" (I believe) encompasses the idea of acknowledging the importance of the divine realm, and of elevating that which is spiritual in ourselves and in others and in the wider world around us -- while the word "grace" evokes that which is seen as a gift from the other realm, something which cannot be forced or demanded or created by our own efforts but which comes basically as a gift from the gods, or as a gift from God.

Intriguingly enough, veteran economist Michael Hudson (who is also a scholar of ancient history, as well as having been an advisor to the United Nations Institute for Training and Development, a university professor, a manager at an early sovereign bond mutual fund, and a host of other high-level roles in academia, finance, and government) explains that "the great fight of the classical free market economists" was to oppose those who wanted to claim private ownership over "what was a gift of nature -- the sun that the Physiocrats cited as the source of agriculture's productive powers, inherent soil fertility according to Ricardo, or simply the rent of location as urbanization increased the value of residential and commercial sites" (Killing the Host, 30).

He has much more to say about this subject in that book and in his other writings. It would seem that the behavior of the suitors in the Odyssey could be used as an example of the kind of damaging, violent, host-destroying behavior that Michael Hudson -- and the classical liberal philosophers he invokes -- opposed. It is also noteworthy that when Telemachus publicly confronts the suitors about their destructive freeloading behavior, their leaders make speeches which essentially seek to exonerate themselves and blame Telemachus and his mother, just as the "suitors" that Michael Hudson describes in his book want to portray themselves as virtuous while blaming their victims for the horrendous damage that they themselves (the "suitors," or as the classical economists called them, the "rentiers") are causing.

The powerful insights which the ancient myths and sacred stories of the human race can offer and which can be applied to the very practical, and often very pressing, problems and situations we face today, are literally endless. A greater appreciation of the importance of the seemingly simple act of acknowledging our dependence on the gifts of the Invisible World, the gifts of the divine realm, before each meal, for every item of food or drink that we taste and upon which our lives depend here in this material realm can lead to a better understanding of the damage that arises from the reckless disregard of the divine source of these gifts, damage that actually acts as the very opposite of blessing.


Posted by David Warner Mathisen at 1:42 AM