The gods are real 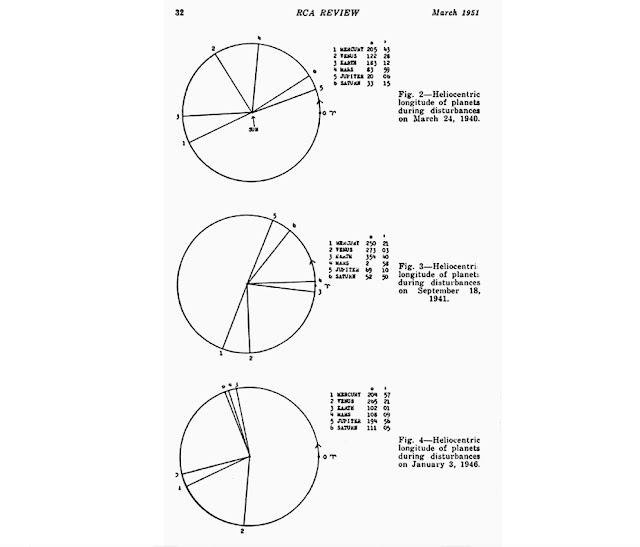 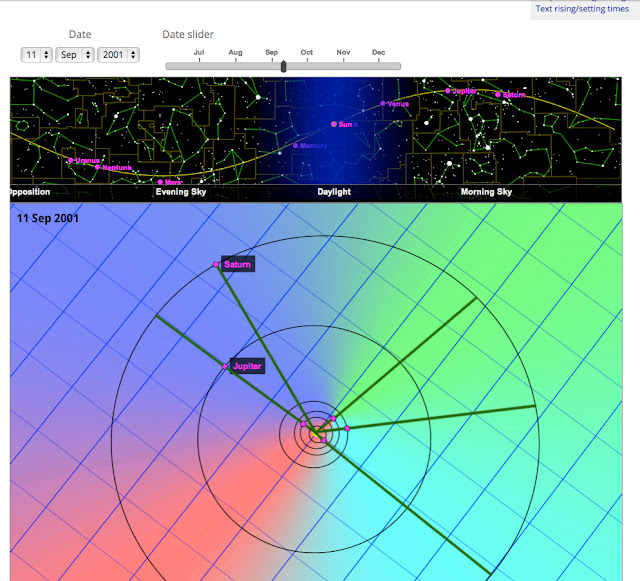 As you should be able to see, the planetary configuration on that day bore strong similarities to some of those shown in the 1951 article by J. H. Nelson. Specifically, we see a "180-line" created by the planets Jupiter and Mercury (and the Sun at the center), along with a nearly "90-degree-line" created by the position of the Earth (which is the planet on the third ring out from the Sun, and the ring just inside the orbit of Mars, which is the outermost of the tight group of rings near the Sun).

Below is the same chart showing the planets on September 11, this time with the 180 and 90-degree lines highlighted in red: 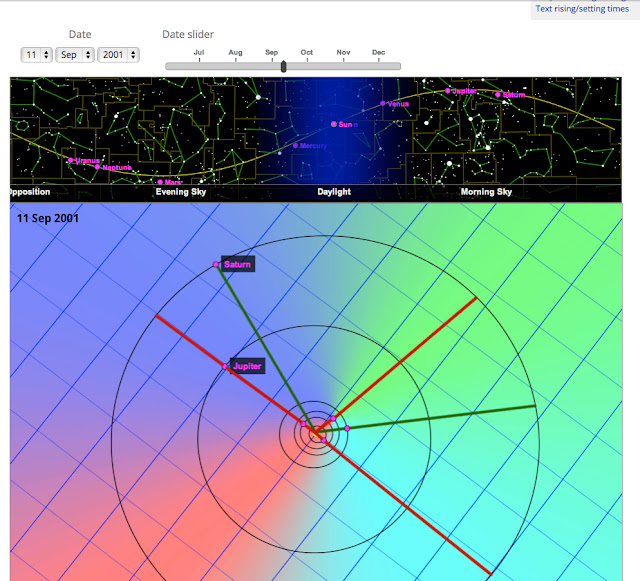 Next, the arrangement of the planets is shown for the date of 12/14/2012 is shown. This is the date of the notorious Sandy Hook event. The pattern here is not as clear-cut as the configuration shown above or the others shown below, because we do not see the clear "180-line" that we see in most of the diagrams from Nelson. However, it should be fairly evident that there is a 90-degree angle between Saturn and Mars, which is a configuration mentioned in Nelson's principles in the original article. Not only that, but the positions of Mercury and Venus are very close to the direction of the Saturn-line, thus indicating that we have what Nelson describes as a "concentration of planetary influence near the 0, 90, 180, or 270 degree points" of Saturn or Jupiter (in this case, Saturn): 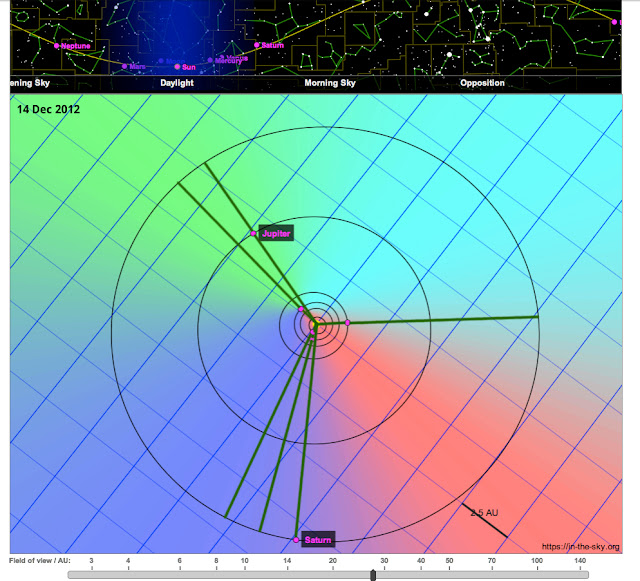 Below is the same diagram for 12/14/2012, this time with the lines for the angles of Saturn and Mars drawn in red (and you can see the lines for Mercury and Venus right next to the line for Saturn): 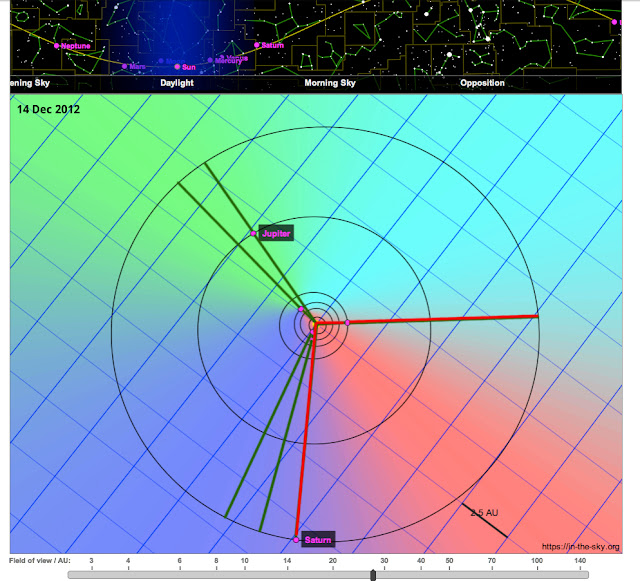 Below is the planetary configuration for the date of 06/12/2016, which is the date of another traumatic event in recent history, the Pulse Nightclub shooting in Orlando: 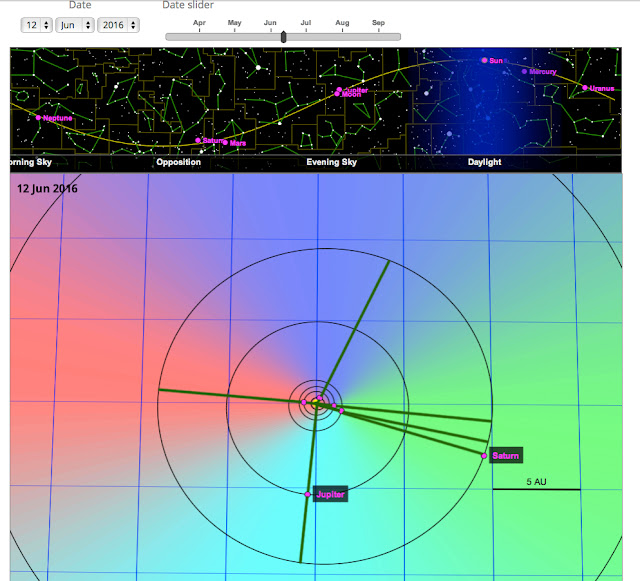 In this diagram of the planetary configurations, we can see a very clear 180-line, bisecting the circle, formed by Venus and Earth on either side of the Sun. Jupiter is 90-degrees off of this 180-line. Additionally, Jupiter and Saturn are nearly at 90-degrees to one another, and both Mars and Earth are close to Saturn in terms of angle from Jupiter, creating another "concentration of planetary influence" such as described in the Nelson article from 1951. Below is the same diagram with the 180 and 90-degree angles highlighted in red: 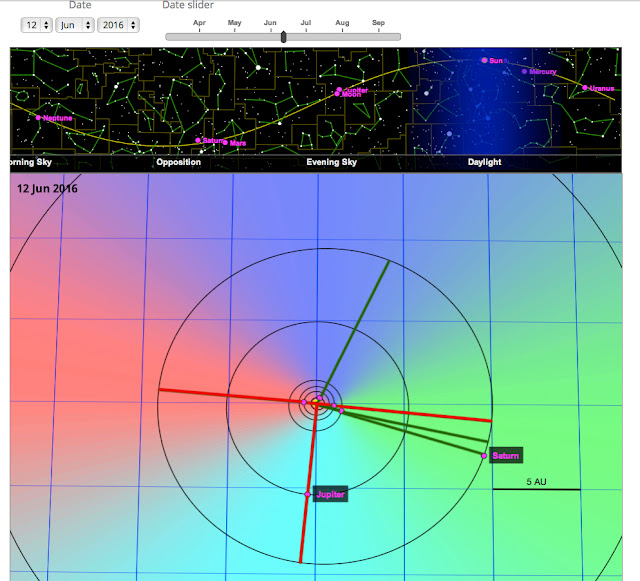 Below is the planetary configuration for the date of October 01, 2017, which was the date of the murders in Las Vegas under extremely suspicious circumstances, which traumatized the entire world: 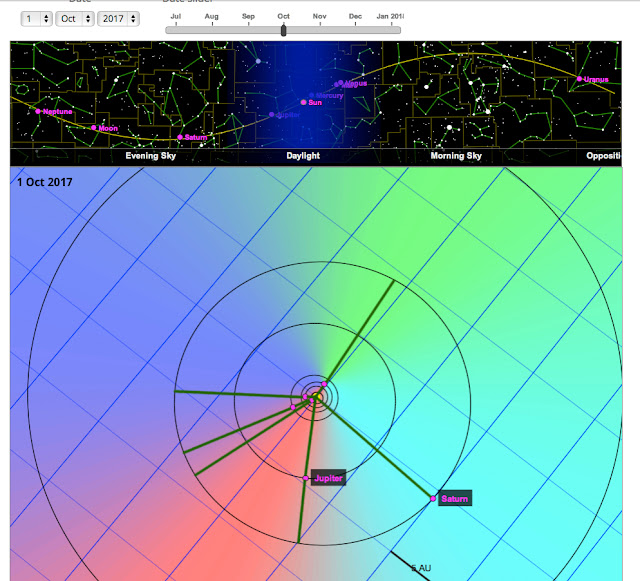 Once again, we do not see a clear 180-line, but we do see a very clear 90-degree angle created by the positions of Earth and Saturn. In addition, we do see that Mercury (on the opposite side of the Sun from Earth) is making a near-180-degree line with the Earth and the Sun, as highlighted in red in the diagram below: 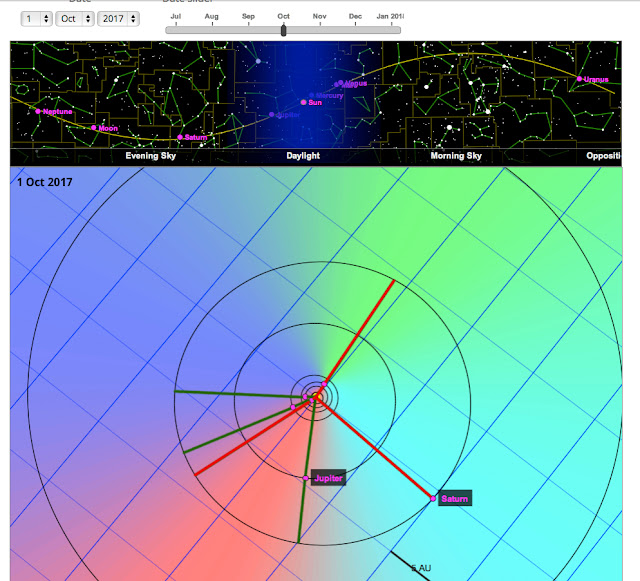 Again, the reader is encouraged to compare these configurations to those shown in the image from the J. H. Nelson article which diagram planetary positions which created great disturbances in the electromagnetic spectrum and in the propagation of shortwave signals.The similarities of the above patterns to the patterns in the Nelson article from 1951 do not conclusively demonstrate that someone who is aware of the power of the planets and who understands the significance of various planetary configurations is planning or coordinating or scripting traumatic events, including the events that took place on the dates shown in the orrery diagrams above. However, these configurations on those dates certainly give us something to consider, and constitute data that bears keeping in mind for further analysis in the future. Hopefully, there will not be more such traumatic (and often suspicious) events -- but if so, the planetary configurations should be noted for signs of a recurring and ongoing pattern.The ancients understood that the powers of the Unseen Realm (or Realms) are indeed real. The ancient wisdom of the world appears to encourage us to use this understanding in order to benefit others, and not in order to obtain power over others, or in order to harm others, or in order to accumulate wealth. Such misuse of the gifts given by the gods always leads to disaster, in the world's sacred stories and traditions, and to serious consequences sent by the gods themselves.The data compiled by the RCA engineers and technicians, and analyzed by J. H. Nelson appears to offer compelling evidence that the gods or powers with whom the planets have anciently been associated are indeed real, and do have the ability to impact our world in ways we do not understand today. And the overwhelming evidence that the ancient myths are directly based on the motions of the stars, the planets, and the other heavenly cycles should show us that the ancients, even in remotest antiquity, knew it. We in the modern era should start to remember it, because this knowledge is sadly forgotten (or neglected, or actively suppressed) today.
Thank you to Joseph Farrell for his ongoing work in bringing this evidence to light, and for his analysis of its tremendous and wide-reaching implications.It should go without saying that Dr. Farrell does not endorse and does not necessarily share many of the views or conclusions that I may have come to in my own analysis and discussion above or in other blog posts or publications.


Posted by David Warner Mathisen at 3:39 AM