The Scorpion and the Smoky Abyss 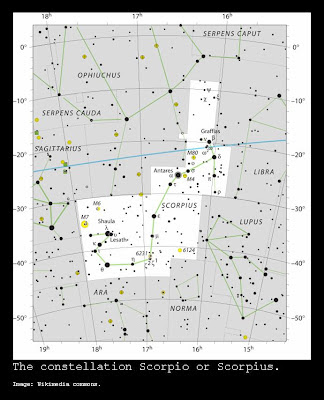 Back in May a previous blog post alerted readers to the return of the constellation Scorpio (or Scorpius) to the early evening sky (back then it was rising out of the horizon in the east in the hours before midnight), along with some links to posts describing the best way to locate this distinctive constellation as well as some discussion of its ancient mythological significance, much of it based on the work of Giorgio de Santillana and Hertha von Dechend in Hamlet's Mill.

Almost two months later, the Scorpion is "culminating" (reaching its highest point, or "transit" point, in the sky) at approximately 10:30 pm -- a very accessible time for stargazing.  It is a beautiful sight, as Scorpio is a very long and brilliant constellation, like a string of jewels in the southern sky.

Because it stretches so far below the celestial equator, viewers in the northern latitudes of the northern hemisphere rarely see the full constellation -- it can often be seen rising above the horizon, but the lower parts of its long sinuous tail are often obscured by the horizon. Your best opportunity to see the entire constellation is when it reaches its highest point on its arc across the southern sky, which (as mentioned above) is now taking place at about 10:30 pm (and getting earlier by about four minutes each night).

The entire constellation of the Scorpion is a glorious sight to see, and well worth the effort.  For incredible time-lapse videos that feature the Scorpion and the Milky Way (and some discussion of the importance of the Scorpion's station at the southern end of the Galaxy) see this previous post.

The Scorpion is located "just to the right" of the shining band of the Milky Way where the Galaxy rises up from the horizon to arc across the sky (at the other end are the Twins and the Crab).  Higher up in this beautiful path across the heavens from Scorpio are the constellations of the Eagle and the Swan, flying towards one another -- they are now beginning to be clearly visible in the east during the hours after sunset, and as summer progresses they will be seen further and further across the sky until they dominate the center-stage of the nightscape.

Hertha von Dechend and Giorgio de Santillana provide evidence in Hamlet's Mill that ancient cultures -- from the world over -- saw the shining path of the Milky Way as the road the soul took between incarnations.  The two points where it met the horizon were seen as gateways between this world and the other world.

These coded mythological descriptions often contain a reference to the two zodiac constellations who flank the Milky Way on either side: Scorpio and Sagittarius (the Archer, often traditionally portrayed as a centaur wielding a bow and arrow).  Von Dechend and de Santillana argue, following the work of German philologist Professor Franz Boll (1867 - 1924), that references to an abyss or a well that goes down to the underworld and which is guarded by scorpion-beings or centaurs (or both) refer to this portion of the night sky.


The well, closed by a stone [. . .] is not unfamiliar to us [. . .].  There are more curious connections between wells and stones that ask for consideration in future investigations, such as the following three items:
[. . .]
(3) The falling star that opened the abyss, according to Revelation -- a future event, for a change.  Out of this well ascends smoke which darkens the sun and air, and Franz Boll pointed aptly to the "smoke-barrel," south of Sagittarius and Scorpius: Ara, the Altar in the Galaxy [footnote: Thymiatherion, or thyterion.  Michael Scotus still made it "puteus sive sacarius."  See F. Boll, Sphaera (1903), p. 446; Boll, Aus der Offenbarung Johannis (1914), p. 75.], and under this very Altar are the souls of the witnesses of God waiting for the last day (Rev. VI.9).  According to Eratosthenes' catasterisms, at this Altar Zeus and his followers took their oath before attacking Kronos.

[. . .] Franz Boll (Offenbarung, pp. 69ff) has recognized in those strange locust demons of Revelation -- they come out of the well of the abyss -- who resemble horses with human heads, and have wings, and tails of scorpions, the Sagittarius-Centaur of Mesopotamian boundary stones, also to be found on the rectangular zodiac of Dendera.  Revelation also states that they had wreaths of gold on their heads; the Egyptian Sagittarius wears a double crown, the Teukros tradition ascribes to the constellation "the royal face" (to prosopon basilikon, Boll, Sphaera, pp. 181f).  In the Gilgamesh Epic Scorpion men watch the way to the other world; Virgil (Aeneid 6.286) makes it centaurs.  Hamlet's Mill, appendix 36, pp 423-424.

The reference to Revelation is primarily concerned with the description that makes up Revelation chapter 9.  There, the characteristics of the scorpion are clearly present, and emphasized several times (in verses 3, 5, and 10).  So is the concept of smoke rising up out of a bottomless pit (in verses 1, 2, and 3).  The "locusts" described in verses 3 through 11 are probably describing the constellation Sagittarius (and combining the aspects of the nearby Scorpio). 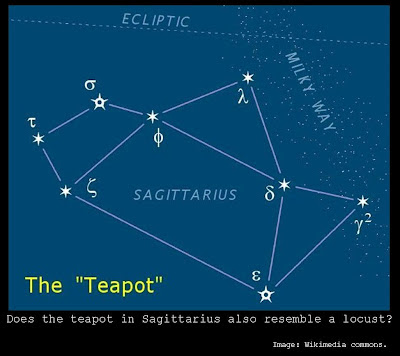 Sagittarius is located just on the other side of the rising "smoke" of the Milky Way from Scorpio ("to the left").  Below is a diagram of the complete constellation of Sagittarius in which the tail of the Scorpion can be seen coming in from the right side of the picture: 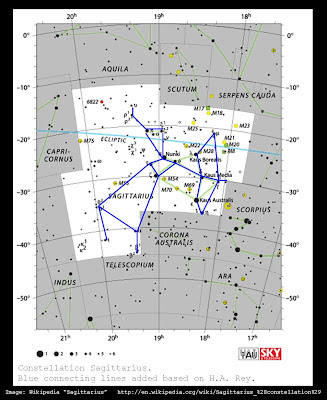 In the above diagram, I have added blue lines to give the outline of the constellation as suggested by H.A. Rey in his indispensable book The Stars: A New Way to See Them.  As usual, his outline is far more helpful to viewers looking for the constellation than either the flowery allegorical pictures common in previous centuries or the spare geometric abstractions common in more modern star maps.

Note that the Revelation passage does make reference to making a sound like horses running to battle in regard to the locusts (in verse 9), which reinforces the assertion that they are related to the constellation Sagittarius who is traditionally a centaur.  Further, they are described as having the "faces of men" (in verse 7), which is also indicative of centaurs.

Additionally, they are described as having "crowns like gold" -- and one can see in the diagram above that the constellation of the Southern Crown (Corona Australis) is extremely close to the constellation Sagittarius.  Below is a detail of the Southern Crown with lines drawn along the arc of stars that make up the crown; H.A. Rey notes that it is difficult to see from the middle northern latitudes (only the southernmost US latitudes can see it), as its stars are much fainter than those of the bottom of the Scorpion's tail, which are at about the same celestial declination. 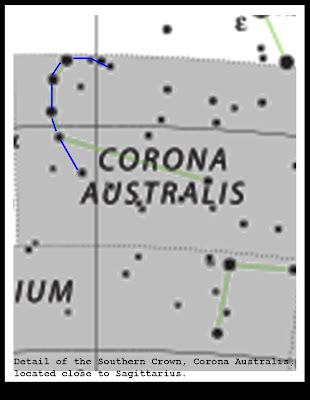 As the summer goes on, the "rising smoke" of the Milky Way will become more and more visible.  However, there is perhaps no better time to get out and see the entirety of the beautiful and significant constellation of the Scorpion than right now.
Posted by David Warner Mathisen at 8:30 PM