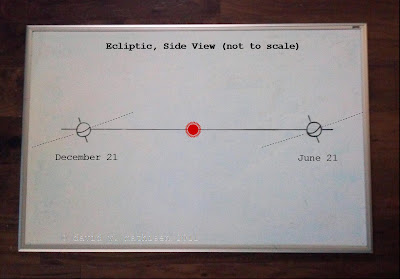 Earth is rapidly approaching the point on its orbit at which the north pole points directly away from the sun (while still at its normal angle, which is inclined from the ecliptic plane by ninety degrees less the 23° 26’ of axial tilt of the earth), known as the December solstice. For the northern hemisphere, it is winter solstice.

As this helpful article from EarthSky explains, there is one precise moment at which earth will pass through that specific point on the orbit, although it will be a different clock time in all the different parts of the globe when it happens (and the calendar date will be different depending on your location in relation to the arbitrary convention of the international date line).

Here are some diagrams which may be helpful in understanding the celestial mechanics associated with the solstices. Above, the earth is drawn at the two solstices, the December solstice on the left and the June solstice on the right. 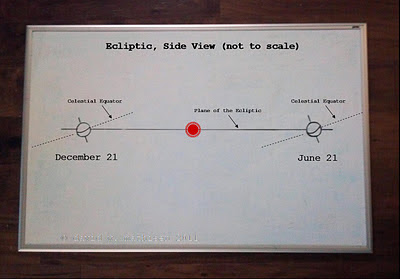 At any point in the northern hemisphere, there is a point in the sky around which the entire sky appears to rotate. This point corresponds to the north pole on earth and is the point in the sky to which the north pole points -- the north star, Polaris, is very close to that point in the sky. Ninety degrees down from this point is the celestial equator, an imaginary line in the sky which is the projection of the earth's equator, a great circle which arcs across the sky at the same angle all year long, depending upon your latitude (you can see more diagrams and discussion of this concept in this blog post, and follow the links to the excellent website of the Polynesian Voyaging Society website, which explains it in even greater detail).

The celestial equator is marked in the above diagram by a dotted line projecting earth's equator into the sky. Again, it forms a great circle, but because that circle is seen "edge-on" in the drawing, it appears as a straight line.

In the night sky, the stars along the celestial equator include the three bright stars of Orion's belt, and the left wing-tip of Aquila the Eagle (Rey 113). The ecliptic passes through the zodiac constellations, and the planets (which orbit the sun along planes that are roughly aligned with earth's orbital plane to create the familiar shape of the solar system) track across the sky along the ecliptic as well.

On the "day side" of the equation, the ecliptic will mark the path that the sun travels as it arcs across the sky. In the illustration below, an attempt has been made to "shade in" the half of the globe that is not receiving sunlight in the two depictions of earth (the left half in the earth on the left and the right half in the earth on the right). You can see why the north pole (and all the points above the Arctic circle) stays dark all day on deepest days of winter (including of course the December solstice) and why the south pole (and all the points between the Antarctic circle and the south pole) stay light all day on the same December solstice. On the daytime side of each earth-globe in the diagram below, the ecliptic is above the celestial equator in the summer (the June solstice for the northern hemisphere) and below the celestial equator in the winter. 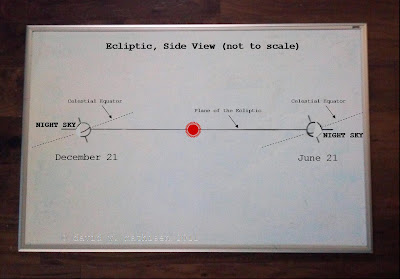 If you pay much attention to the arc that the sun takes through the sky on various days of the year, this will all seem pretty obvious: the sun's arc follows a much higher path through the sky in the summer than it does in the winter. The celestial equator is not marked with visible markers during the daytime the way it is by night with familiar stars such as Orion's belt, but you can always imagine where it is if you know your latitude and the location of the celestial pole and then envision the great circle that runs across the dome of the sky ninety degrees down from that point. The sun's ecliptic path will be above this line in summer (after crossing it on the spring equinox) and below it in the winter (after crossing it again on the fall equinox).

The fact that the steepness of the sun's arc is much more vertical during the summer (most vertical on the summer solstice) and much shallower during the winter (most "laid down" on the winter solstice) can be envisioned by drawing yet another line on our diagram, this time representing the horizon to an observer in the northern hemisphere (who is represented by a light blue rectangle on each earth at December solstice and June solstice). 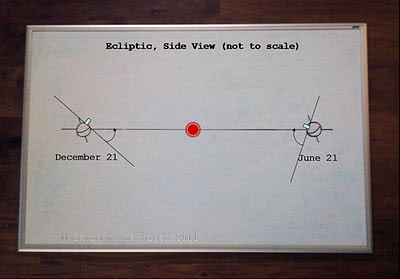 Note that the blue rectangle is at the same latitude in both diagrams: if we imagine the earth rotating as it does each day around its axis, the blue rectangle on the left globe will swing around to being as close to the ecliptic as it is on the right globe, but it will be facing away from the sun (night) on the left globe, while it will be facing towards the sun (day) on the right globe. In the above diagram, the rectangles are both depicted as facing towards the sun (day -- in fact, noon).

In this diagram, the horizon as it appears to the observer at that point is drawn as an additional line. The dotted lines depicting the celestial equators have been removed for greater clarity. However, the line representing the plane of the ecliptic is still drawn, because it indicates the plane the sun takes through the observer's sky during the day. This diagram should make quite obvious the reason that the arc-path of the sun on winter solstice is as low in the sky as it ever gets, and as vertical as it ever gets on the day of summer solstice. The angle of the sun at noon has been indicated with an angle-arc arrow in each case, and the angle can be seen to be much greater (a much higher sun-path) on the June solstice for the northern hemisphere observer.

These diagrams should help explain the mechanics of what is going on during the great annual cycle that gives our year its rhythm. This cycle is every bit as important to the cycles of life on earth as is the daily rythm of night and day -- and, of course, the length of each night and each day is directly impacted by this larger cycle.

We are all aware to some degree of the power of the daily cycle upon our minds and our bodies and our energy levels -- just try working a "graveyard shift" job for several weeks or months and see if you notice any effect. Certain cultures preserve the knowledge of the fact that different organs of our human bodies have different times during the day at which they are at higher and lower energy levels (traditional Chinese medicine, for example, places great importance on these cycles).

If this is true of the daily cycle of night and day, it stands to reason that it is also true for the annual cycle that is marked by the solstices and equinoxes. For this reason (as well as many others), it is very beneficial to understand and appreciate the annual rhythm of which tomorrow's solstice is such an important station. As you go through the solstice, you can imagine the moving pieces of earth, sun, ecliptic (crossing and then yawning above or below the celestial equator), light and dark.

If you did not understand all those aspects of the solstice before, I hope that this discussion has been helpful.