The geology of the Little Colorado River Gorge


Over the weekend, on Sunday 06/23, aerialist Nik Wallenda crossed the Little Colorado River Gorge on a two-inch-wide steel cable, taking approximately 22 minutes to make the journey.

Some Native tribes protested the event, arguing that the canyon is sacred to their people and should not be used for a publicity stunt.  Others assisted in the event, and the Navajo Nation provided the permit in exchange for the clean up of some platforms and cables left behind for decades after a planned crossing in the 1970s that never took place due to lack of funding (according to this article).

Whatever your opinion of that controversy, Wallenda successfully accomplished the incredible crossing over the 1,500-foot chasm.  The geology of the location is absolutely breathtaking.  It also provides important clues about our planet's past. 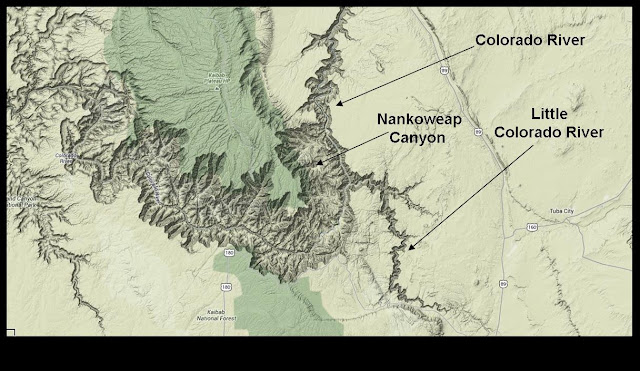 Both Nankoweap Canyon and the Little Colorado River Gorge are important clues to the mystery of the formation of the Grand Canyon, and they present geological evidence that confounds conventional theories.

Dr. Walt Brown, the originator of the hydroplate theory, believes the Grand Canyon was formed by events that took place in the aftermath of a global flood, and his theory provides an explanation for the Little Colorado River and Nankoweap Canyon (as well as for the very difficult-to-explain turn in the Colorado River seen in the map above, where the river that was running generally north-to-south takes a hard right turn to the west and plows right through the enormous massif of the Kaibab Plateau, which is colored green in the map).

Previous posts have detailed Dr. Brown's theory for the creation of the Grand Canyon -- see for example:
n and surrounds, see for example:
Dr. Brown believes that the mechanisms that formed the Grand Canyon and surrounding features began with two large bodies of water that were trapped after the floodwaters drained off the earth, and uplifted by the physics related to the rapid formation of the Rocky Mountains, whose weight caused them to sink downwards, forcing the Colorado Plateau upwards.

Dr. Brown calls these two lakes "Grand Lake" (further north) and "Hopi Lake" (further south), and diagrams where they were on this map. He believes that Grand Lake eventually breached catastrophically due to increased rainfall and runoff after the flood (caused by warmer oceans). The tons of water cascading out of it eventually undermined the walls holding in Hopi Lake as well, and it breached as well.  The Little Colorado River Gorge marks the location of the breach of Hopi Lake.

About halfway down this webpage, Dr. Brown discusses Nankoweap Canyon and the evidence there which is very difficult to explain by proponents of the conventional theory for the Grand Canyon's formation.  Discussing the detailed image of the Nankoweap Canyon region shown there, he writes:

Nankoweap—Region of Unusual Erosion. This view is looking southeast from 4,400 feet above the ground. The Little Colorado River enters the southern end of Marble Canyon at the top center. The yellow line encloses a region of unusual erosion. Notice that on the top of the high Kaibab Plateau, streams do not flow into the many canyons that are cut into this southeastern portion of the Kaibab Plateau. So, what cut these side canyons, and why are they in such a localized area? Why would the terrain east of Marble Canyon, which is at least 2,000 feet below the top of the Kaibab Plateau and most of this erosion, be so smooth? On top of Nankoweap Mesa are slumps, landslides, and rockfalls. How can rocks fall and mud flow onto the top of a mesa?

Another point of difficulty for conventional theorists is the origin of the Little Colorado Gorge in the first place.  As you can see from the map above, it seems to spring from out of the desert itself.  Dr. Brown's theory argues that subsurface water burst out of the water table after Grand Lake and Hopi Lake began to empty, and it was this subsurface water which was responsible for creating many of the major canyons that we see emptying into the Grand Canyon from the sides.  The canyons themselves, such as Marble Canyon and the Little River Gorge, are cracks created when the ground arched upwards after the catastrophic breaching of Grand Lake and Hopi Lake removed the material above.  The subsurface water then flowed out the sides of these cracks, creating the side canyons we see today, including the Little Colorado Gorge.

The fact that Nankoweap Canyon was the site of the earliest known habitation in the area is also problematic for conventional geological theories, because they have a hard time explaining where all the water came from that attracted the Old Ones or Anasazi to the area in the first place, and what caused it to disappear, causing them to leave.  This article by Terry Hurlbut discusses this question, and interestingly enough does so in light of Dr. Brown's theory, which provides a satisfactory explanation for the human history of the area.

We can all be glad that Nik Wallenda made it safely across the canyon on his first try.  His feat should cause us to examine the amazing geology of the Little Colorado River Gorge and the Grand Canyon, as well as to reflect upon the sacred traditions of the Native tribes who still remember and honor their ancestors who lived in the region so long ago -- and to consider the ways in which the geology and the human history of this beautiful area are intertwined.

Posted by David Warner Mathisen at 1:07 AM