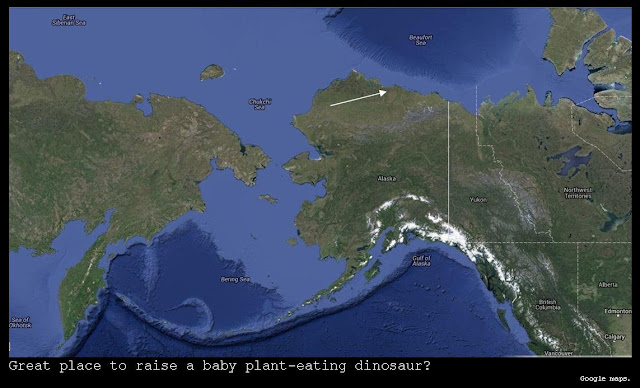 Another special thank-you goes out to Mr. TRB of California, who noticed this story entitled "Juvenile Dinosaur Found in Alaskan Arctic" and immediately realized the importance of such a find to the subjects regularly discussed on this blog.

The article reports the recent discovery of a skull believed to belong to an immature pachyrhinosaurus, a plant-eating dinosaur of the Ceratopsidae family of horn-shaped dinosaurs (other members of this family include Styracosaurus, Monoclonius, and the famous Triceratops).

The full research article about the find was published on June 19th of this year in the journal PLOS One, and is entitled "An Immature Pachyrhinosaurus perotorum (Dinosauria: Ceratopsidae) Nasal Reveals Unexpected Complexity of Craniofacial Ontogeny and Integument in Pachyrhinosaurus," by Anthony R. Fiorillo and Ronald S. Tykoski.

As shown in the map above, the fossil discussed was discovered well north of the Arctic Circle, in northern Alaska south of Prudhoe Bay, in the vicinity of the Kikak-Tegoseak Dinosaur Quarry.  Numerous other fossils have been found in this same quarry in the past -- including a tyrannosaur, other pachyrhinosaurs, and even insects, according to this list from the Smithsonian's ETE (evolution of terrestrial ecosystems) paleobiology website.

The discovery of so many dinosaur fossils in a quarry so far north of the Arctic circle is remarkable in and of itself, and raises questions as to how they found food to sustain their massive bulk so far to the north, especially the plant-eaters such as Pachyrhinosaurus.  Scientists generally believed that dinosaurs ranging so far were probably migratory adults, who would head back south during the long, cold, Arctic winter (above the Arctic circle, there are days during the winter in which the sun never emerges above the horizon). However, this newly-discovered skull of a young Pachyrhinosaurus in the same formation appears to upend that theory, causing scientists to conclude that the dinosaurs perhaps lived there year-round, and even had offspring there.

Here is a description of the region from the original research article announcing and discussing the find:

The Kikak-Tegoseak Quarry is a monodominant bonebed deposit [13] with a minimum of eleven individuals represented in the quarry, based upon the number of occipital condyles currently known from the site (including that in the nearly complete skull DMNH 22558). The specimen was collected as a float block found within a meter of the main Kikak-Tegoseak Quarry edge. We are confident that the new specimen can be referred to P. perotorum and that it does not represent a second ceratopsid taxon from the site. The specimen is notable because it comes from a smaller, relatively immature individual, contrary to previous published statements about the individuals from the quarry all being of similar ‘adult’ ontogenetic stage [13] and therefore expands the known age profile of this taxon from the site.

As discussed in previous posts, the discovery of any fossils at all, anywhere on the planet, should raise questions as to how those bones were preserved and petrified, because under normal conditions the bones of animals that die in the wild are decomposed by microbes and other factors long before they can turn to stone.  Special conditions, such as rapid burial under thick mud, are probably required for the creation of most fossils.  The fact that there are so many fossils around the world points to the possibility of some sort of cataclysm or cataclysms that created such special conditions in the ancient past.

Further, this fossil bed contains numerous fossils of the same species, as well as of a few other species, as mentioned in the article and in the list of taxa linked previously.  Could this concentration of fossils represent numerous individuals who fell victim to a single catastrophic event?

Finally, the fact that these fossils are found so far to the north -- and include the remains of an immature Pachyrhinosaurus -- is perhaps the most puzzling aspect of all.  Are we really to believe that these were all representatives of a species of "polar dinosaur," who spent their year at such extreme northern latitudes, near the northern coast of Alaska, and even bore their young there?  These are reptiles, not warm-blooded caribou.

All of the difficult problems listed above, however, are explained by the hydroplate theory of Dr. Walt Brown.  That theory proposes that there is substantial evidence to support the possibility that a catastrophic world-wide flood once erupted with great violence and covered the earth, accompanied by massive amounts of sediments which would have rapidly buried and fossilized many animals and plants.

Even more importantly for the understanding of how so many seemingly incongruous fossils are found at latitudes so far to the north (and so far to the south as well), Dr. Brown's theory discusses why the principles of physics would have caused the entire earth to undergo a "Big Roll" in the aftermath of that flood event, a roll which would have brought latitudes that were formerly further south "up" towards the Arctic, as well as (on the other side of the earth) latitudes that were formerly in more temperate climates "down" into the Antarctic as well.

You can envision this event by taking a basketball between two hands and looking down at it, imagining that the point on the ball that you are looking down on represents the north pole, and then rotating the ball forwards using the rotation of both of your wrists -- bringing "latitudes" on the ball that were formerly further south up into the "north pole" area that you are looking at from above.  Acknowledgement goes out to Rand Flem-Ath for this basketball metaphor, which he used in an interview in 2009 (for the record, this mention is not intended to suggest that Mr. Flem-Ath supports the hydroplate theory; he appears to believe something different, although he also believes that the conventional theories generally taught as undisputed fact have serious problems and probably are not correct).

Of course, when you rolled that basketball, you moved a lot of fossils that had been buried at more temperate latitudes on the ball up towards the "Arctic" part of the ball, and on the other side you rolled fossils from more temperate latitudes down towards the "Antarctic" part of the ball.  So, those animals did not need to actually live in those latitudes before they were buried and before the earth experienced its "Big Roll."  According to Dr. Brown's theory, events that took place after the rapid burial of plants and animals led to the physics that caused the roll of the earth.

Previous posts have discussed the many fossil findings which have surfaced over the years in both the Arctic and the Antarctic that support the idea of a "Big Roll."  These include:
This discovery of the immature Pachyrhinosaurus would appear to join this list of evidence pointing to the earth's Big Roll at some point in the ancient past (and there are other pieces of evidence, not found in the Arctic or Antarctic, which also support the Big Roll conclusion).

More evidence for Dr. Brown's theory continues to show up around the world.
Posted by David Warner Mathisen at 11:46 PM