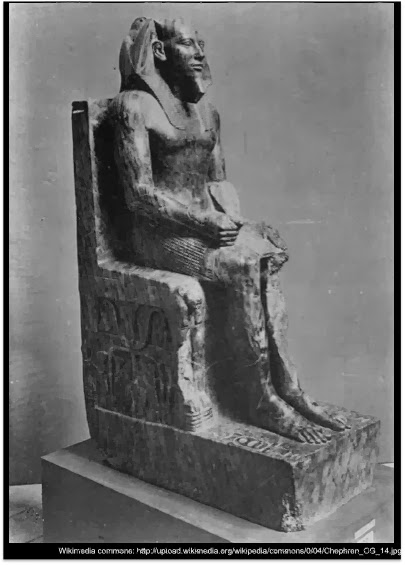 In his groundbreaking book, Serpent in the Sky: the High Wisdom of Ancient Egypt (1979), John Anthony West explores a host of vital topics, but one extremely important subject he discusses is the relationship between creativity, discipline, and consciousness.

In his examination of the incredible art of ancient Egypt, he explains that creativity and discipline are intimately connected.  We might at first think that discipline, implying rules and even restrictions, would be the antithesis of creativity, but John Anthony West explains that this is not so: it is in fact the discipline which enables the expression of the individual's creativity.

In Egypt, the anonymous sages were the artists, in our modern inspirational sense.  They designed the temples and the statues and the wall friezes.  The sculptors, painters and masons were but interpretive artists, this is true.  But there is no ignominy in this position.  We do not think the violin virtuoso 'repressed' because he must play Beethoven's or Bartok's notes.  Moreover, within the restriction of the imposed piece, there is ample opportunity for the exercise of creativity -- otherwise all virtuosos at a given level of professionalism would sound the same.  And if the virtuoso is a real virtuoso, then he will share in Beethoven's revelation.  90.

It was this combination of discipline and creativity that enabled the development of the individual artist, who by the long path of his particular discipline was enabled to express creativity at a very high level.  In John West's analysis, Egyptian art and architecture was "a continuous exercise in the development of individual consciousness" (90).

This discussion of the interplay between discipline, creativity, and consciousness is extremely interesting.  It is only through years of discipline, for example, that basketball players can reach a level at which their playing can actually become an expression of individual creativity -- a level of artistry and self-expression (within the highly-defined boundaries of the sport) that can be described as the level of a virtuoso.  The same can be said of many other pathways for expressing creativity -- whether music, or painting, or sculpture, or the martial arts, or surfing, or yoga, or rock-climbing, or the craft of pottery, or of woodworking, or of glassblowing, or endless other examples which we can call to mind.

We could even venture to say that the simple act of making tea (which is -- at least in theory --  easier to prepare than coffee) can become a discipline which can eventually enable an extremely high level of artistic expression (and, of course, in some cultures it has).

Interestingly, John Anthony West suggests that together, the interplay of discipline and creativity can lead to "the development of individual consciousness."  In an important 2008 interview on Red Ice Radio (discussed in this previous blog post, with a link to an online video containing the entire interview), John Anthony West elaborates on the importance of creativity and discipline to life.

While the entire interview is worth listening to, the really focused discussion of "consciousness" and the role of creativity and discipline begins around the 1:15:00 mark in that video.  During that discussion, he again expresses the view that creativity -- which can be expressed in an enormous variety of disciplines, including hard work as "a carpenter, or a cooper" (1:17:22) -- is fundamental to consciousness.

In the same discussion, he expresses the view (also found on pages 90 and 91 in Serpent in the Sky) that modern civilization makes it much more difficult to pursue this path, particularly in our daily work lives.    But, in the same discussion, he notes that this should not be cause for complete despair -- it is still possible to pursue this path, although perhaps one will have to make a living doing something else at the same time.  Beginning at about 1:32:15, Mr. West explains:

It's very difficult to find that life path that will actually prove nurturing in and of itself -- but it doesn't mean that you can't do it: everyone has to make a living, so, not everybody can be a writer or a painter or an artist or a creator in that sense, especially nowadays -- but as long as the message is driven home, and there are -- as I said, there are -- my own focus is the Gurdjieff work but, that's, you know, that's a small thing -- it's not a small thing, it's a big thing, but it's not that well known -- but there are disciplines, legitimate disciplines, out there, that can be followed -- it's hard to do by yourself, you almost need a class to do it -- it's like learning the violin by yourself -- you can learn it, but you're much better off with a teacher -- you can learn it by yourself and then when you get to a certain point you have to get a teacher to teach you what you're doing wrong so that you can do it right.  So there are schools in which you can pursue that path -- but without the discipline it's just in your head -- it's a lot of New Age malarkey -- but without that there's no possibility of a civilization.  [. . .] First you have to recognize that the path is there -- then it has to become visceral and practical, and not just in your head, and that's the difficult part, unfortunately -- but without that there is no civilization nor can there be.  Simple as that.  Without the understanding that we as human beings individually and collectively have a destiny to fulfill -- nothing can happen.

Once again, we see the theme that "creativity" without any discipline at all, may not really be creativity but actually "malarkey."  But there are paths, legitimate paths, which are open to us to pursue, and which can connect us to something that, in John Anthony West's analysis, the ancient Egyptians were also pursuing -- pursuing with a single-minded purpose, in fact.

This seems to be an extremely important subject, and one upon which John Anthony West's insights are supremely valuable and worthy of careful consideration.
Posted by David Warner Mathisen at 1:24 AM