Another dazzling display in the pre-dawn sky: Mars passing Regulus in Leo 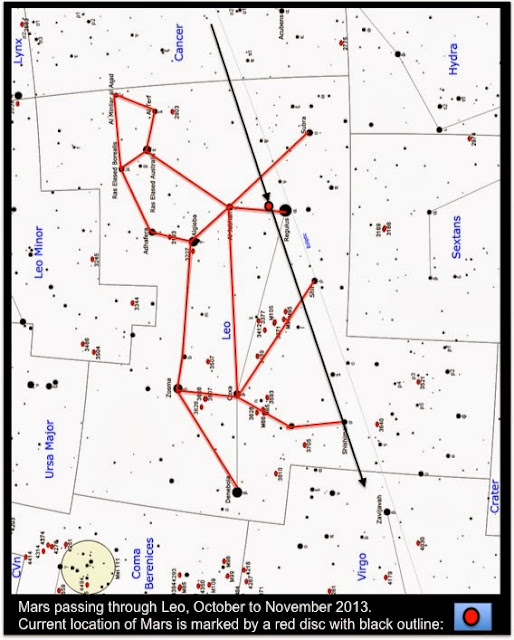 Star-watchers who have been rising early to enjoy the spectacle of Jupiter in Gemini high in the sky during the hours before dawn (described in this previous blog post) have no doubt already been watching another planetary show not far away, where the Red Planet Mars has been moving into the constellation Leo the Lion and which is now passing very close to Leo's brightest star Regulus (alpha Leonis).

The Sky & Telescope feature entitled "This week's sky at a glance" tells readers:

In the procession of zodiac constellations, faint Cancer the Crab follows immediately behind the Twins of Gemini in the night sky (meaning Cancer is to the east -- closer to the eastern horizon -- from Gemini), and Leo follows immediately after Cancer.  You can see a diagram which shows the relative positions of Gemini, Cancer and Leo in an earlier blog post from 2011, entitled "The Gate of Cancer."

Leo will be very easy to spot, rising from the east towards the Twins in the early morning pre-dawn sky.  The Twins, above Orion, will be closing in on their zenith in the hours before sunrise (Orion's upraised shoulder, marked by reddish Betelgeuse, reaches zenith or transit point at about 5:26 am today, reaching that point about four minutes earlier each day -- Betelgeuse is ahead of most of the stars of the Twins, but not by very much).

Further to the West, the stars of Leo are still on their ascending arc during the hours before dawn. Regulus rises at about 3:00 am today, and doesn't reach its transit point until about 9:38 am, well after the sun's rise will have drowned all the stars from view.  Just like Betelgeuse, Regulus is rising four minutes earlier each night (a phenomenon which is caused by the progress that earth makes in its orbit around the sun).

Mars is also rising around 3:00 am today, but it is only rising a minute earlier each morning, which is why Leo is progressing "faster" and basically overtaking Mars.  The stars of Leo will continue "passing" Mars until Leo eventually leaves Mars behind and Mars enters Virgo, which is the zodiac constellation which follows the Lion.

Mars has been proceeding closer and closer to Regulus each morning, creating a beautiful sight as the Red Planet approaches and enters the lower part of the arc of the gleaming sickle of stars at the front of the Lion.  The diagram above shows the full outline of Leo, as diagrammed by the outstanding method proposed by H.A. Rey.  The path of Mars is marked by a black arrow, and the current location of the Red Planet is indicated by a red disc with a thick black outline, passing very close to Regulus this morning.

For a more detailed diagram of the track of Mars through the zodiac constellations, including its upcoming retrograde motion beginning at the end of February 2014, see this outstanding star chart from Naked Eye Planets, by Martin J. Powell.