New Year's and the Egyptian Book of the Dead 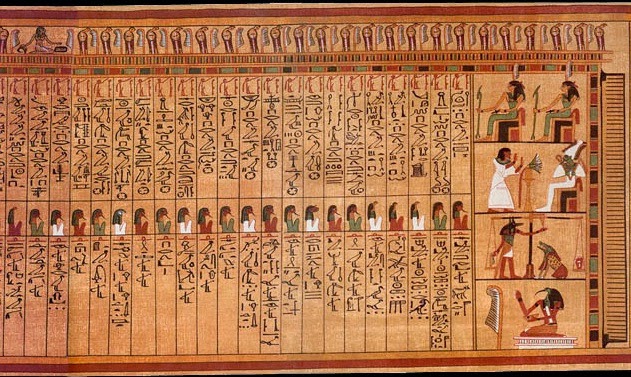 In Lost Light: An Interpretation of Ancient Scriptures (published in 1940, and available here for reading online in its entirety using the top link in the left-hand column which says "read online" or for download as a pdf using the link just below that one), Alvin Boyd Kuhn spends an entire chapter (entitled "Weighed in the Balance," beginning on page 480) discussing the concept of "judgment day" or the "judgment of the soul" found in ancient sacred texts and traditions.

On page 490, he specifically addresses a tradition that "the dead are summoned before the divine tribunal to be judged upon the day of doom, which occurs each New Years Day!"  But he cautions, as he does throughout the book, that these kinds of ancient traditions are misinterpreted if we try to understand them literally.

What this ancient tradition really means, according to Kuhn, is that those of us in a current incarnation in the physical world (whom the ancient texts refer to as "the dead," in that the soul's descent into a physical body is a kind of "death" or "entombment in flesh," but which is only a temporary condition) are undergoing a kind of judgment day year in and year out (that is to say, "constantly" during this incarnation).  Further down on the same page, he explains: "If the Day of Doom came once each year on New Year's Day, it was set only as an annual commemoration of a fact which was perpetual, constant, persistent throughout life."

He then goes on to explain that the famous depictions of the "weighing of the heart" in the "Hall of Judgment" or the "Hall of Two Truths" in the scrolls that have collectively come to be known (somewhat incorrectly) as the Egyptian Book of the Dead do not actually refer to an event that takes place in some other realm in the afterlife: just like everything else in the Book of the Dead (in Kuhn's interpretation) it has to do with things that we need to know about here and now, in this incarnation (this life)!

As argued in an earlier chapter, the Spiritual Guides of humanity gave the race a code of religious instruction that was meant to apply to the world in which it was given, not to a succeeding one.  The seers were not concerned with teaching mankind about the supervening consciousness of the discarnate life.  They taught humanity how to live in the world in which the teaching was imparted, well assured that philosophic behavior of life here would put them in favorable condition to meet the exigencies of the life of rest following the day on earth.  They were vastly concerned to instruct mortals in what it behooved them to learn here, as this was the only realm in which progress could be made, -- unless it be contended that one makes greater progress in sleep at night than in one's waking life by day.  481.

And again, on page 484 Kuhn avers that the sojourn of the soul on earth during each incarnation is in fact the Hall of Judgment: "The horizon line between the two cherubim is the place of the Great Balance.  The two Horus forms or lion gods are the two pillars of justice, and the judgment is the long series of decisions which the man himself renders as he journeys across." (Italics in original).

Even more graphically, Kuhn unpacks his thesis near the end of the chapter:

Man has entered the Gotterdammerung; he stands within the twilight.  He stands on the mounts both of crucifixion and transfiguration, with the shadow of the two beams of the cross or the scales falling athwart his body.  Every act, word and thought of his causes those arms of the scales to move up or down, according as he gives an impulse to spiritual or to sensuous expression.  In their motion they write the scroll of his book of life, alternately upon outward feature and inner character.  Every movement of the bars is a decree of judgment for him.  Taht-Aan, the scribe and recorder, is filling the pages of his book.  496.

This passage certainly makes the whole process sound dreadfully ominous, as if the Book of the Dead taught the impossible doctrine that every sin would have to be avoided in order to avoid having one's heart tossed to the dreadful demon, Ammit, to be devoured.  But Kuhn elsewhere explains that the process of passing through the scales in each incarnation was seen as the essential part of the progress towards overcoming incarnation:

To come forth guiltless from the scales may now be seen to convey the deep significance of the soul's emergence from earth life between the two horizons, washed clean and gloriously spiritualized.  If the judgment had been adverse, the soul would have been cast to the monster Am-mit, which only means, however, return to animal incarnation until final purification.  491.

It is clear from explicit statements and analysis elsewhere in the book that by "animal incarnation" Alvin Boyd Kuhn here does not mean incarnation in the form of what we call "an animal," but rather he means that the soul would incarnate again as a man or a woman -- taking on a physical body again -- as part of the process.

As he says all the way back on page 41, "As the Egyptian most majestically phrases it, the soul, projecting itself into one physical embodiment after the other, 'steppeth onward through eternity.'"  And again on page 251 he writes that the Egyptians believed that, "The soul is as the bee gathering sweet honey of immortality from the flowers of life experience on earth."

And yet again on the same topic, Kuhn writes on page 273 that "In this light it may be seen that the whole of the negative and lugubrious posture of theology as to 'sin' and 'death' as its penalty, might be metamorphosed into an understanding of the natural and beneficent character of all such things in the drama." That is to say, in Kuhn's analysis, because "sin" describes lessons that can only be learned as an incarnation of the divine spark of a soul united to the animal body of the flesh (a pure spirit cannot sin, and neither can a non-human animal -- only a man or woman, who is a combination of the spirit and the animal together can do so), and because by "death" the ancients meant "incarnation of the spirit again," the whole process is transformed from being a fearful one into a positive or beneficent one.

In light of all the forgoing discussion, and the point made way at the top that all this was metaphorically said to have taken place among "the dead" (that is to say, those incarnated right now) on New Year's Day, it is interesting to speculate as to whether the famous "negative confessions" which are found accompanying the scene of the weighing of the heart in the Hall of Judgment (the Hall of Two Truths) in the scrolls of many ancient copies of the Book of the Dead might have some relationship to our ongoing tradition of the "New Year's Resolution."

The so-called "negative confessions" were often forty-two in number, and are associated with Spell 125 of the Egyptian Book of the Dead.  Professor Raymond O. Faulkner (1894 - 1982) said that the name "negative confession" was self-contradictory, and that a better name for it would be "the declaration of innocence."  Here is a portion of the forty-two declarations, as translated by Professor Faulkner (on pages 31 and 32 in this edition of his translation, published posthumously in 1990):

Those of us who try to make New Year's resolutions each year might do worse than to select from among the "declarations of innocence" in Spell 125 of the Book of the Dead any that personally resonate.  Some of the confessions that are most compelling to me personally include:

O Disturber who came forth from Weryt, I have not been hot-tempered [see discussion in this previous New Year's post].

O Owner of horns who came forth from Asyut, I have not been voluble in speech.

Alvin Boyd Kuhn's insight that subject matter of the Book of the Dead applies to our sojourn in this life is indeed revolutionary, and worthy of careful consideration.
Posted by David Warner Mathisen at 12:36 AM