The mummy and the sevenfold soul 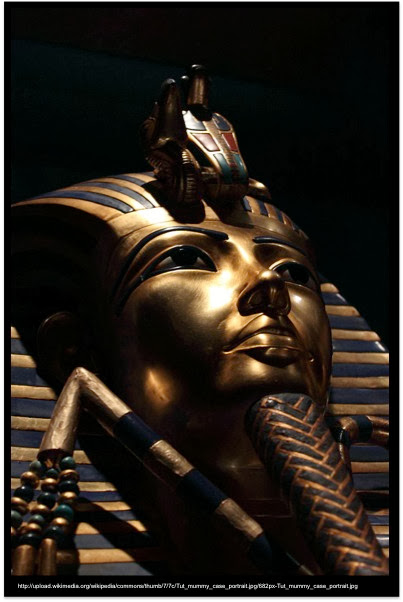 In Ancient Egypt: the Light of the World (1907), the prolific scholar of ancient Egypt Gerald Massey (1828 - 1907) makes the assertion that the reason that the ancient Egyptians practiced mummification was not, as most of us were taught, so that the deceased could use it again in the afterlife.

Rather, as he argues in Book 4 of that work, entitled "Egyptian Book of the Dead and the Mysteries of Amenta," the creation of the mummy was a way of making the deceased into a type of the Osiris, "an image of durability and continuity, a type of the eternal, or of Osiris-karast in the likeness of a mummy" (216).

Massey explains that the journey into the afterlife did involve the soul of the departed in the form of a risen mummy, but that this was a spirit mummy, and not the physical mummy that remains in the tomb. Crucial to understanding this process is Massey's argument that the ancient Egyptians understood the human soul to be composed of seven stages or seven constituent parts, and that the unification of all of them must take place in the afterlife in order to make the image of the Osiris perfect or divinized in the image of Horus.  Only then could the just spirit be made perfect and experience the life everlasting.

Massey lists the seven constituent parts of the full permanent soul on page 203:
Massey declares that "it is a mistake to suppose with some Egyptologists, like M. de [. . .], that the new existence of the deceased was begun in the old earthly body" (213), and again that "it is entirely false to represent the Egyptians as making the mummy and preserving it for the return of the soul into the old earthly body" (215).  The departed received a spiritual or glorified form of the mummy, and ultimately sought to be united with the ka, and Massey explains that the preservation of the features of the departed (along with the very artistic portrayals of the deceased in the tomb) played a critical role in helping the spirit to remember its identity.

He writes: "His mortal personality having been made as permanent as possible in the mummy left on earth, the manes rising in Amenta now sets out to attain the personality that is to last forever" (208).  Unlike the body that is left behind in the tomb, the ka or higher soul accompanies the shade on its journey in the afterlife, and the goal of the departed is to pass from the state of a shade to the state of the ka, and reunify all the constituent parts of the soul.  Massey explains:

When the manes has become a khu, the ka is still a typical ideal ahead of him; so far ahead or aloof that he propitiates it with offerings.  In fact, he presents himself as the sacrificial victim that would die to attain conjunction with his ka, his image of eternal duration, his type of totality, in which the seven souls were permanently unified in one at last.  The ka has been called the double of the dead, as if it simply represented the doppelganger.  But it is not merely a phantom of the living or personal image of the departed.  It serves also for the apparition or revenant; it is a type rather than a portrait.  It is a type that was prenatal.  It images a soul which came into existence with the child, a soul which is food and sustenance to the body all through life, a soul of existence here and of duration for the life hereafter.  Hence it is absorbed at last in the perfected personality. [. . .] This is because the ka was the type of personality, seventh of the seven souls attained as the highest in which the others were to be included and absorbed.  In the vignettes to chapter 25 of the Ritual the deceased is shown his ka, which is with him in the passage of Amenta, not left behind him in the tomb, that he may not forget himself (as we might say), or, as he says, that he may not suffer loss of identity by forgetting his name.  Showing the ka to him enables the manes to recall his name in the great house, and especially in the crucible of the house of flame.  When the deceased is far advanced on his journey through Amenta, his ka is still accompanying him, and it is described as being the food of his life in spirit world, even as it had been his spiritual food in the human life.  203 - 204.

Massey states:  "Preserving the human mummy perfectly intact was a mode of holding on to the individual form and features as a means of preserving the earthly likeness for identifying the personality hereafter in spirit.  The mummy was made on purpose to preserve the physical likeness of the soul" (212).

Massey based these assertions on his close analysis of the Egyptian Book of the Dead, which in the 1800s and early 1900s was usually referred to as "the Ritual," and which Massey argued should be properly called "the Ritual of Resurrection".  Modern scholars often refer to it as the Book of Going Forth by Day.  But Massey, both in the passage above and elsewhere, emphasizes that its contents were not just for the eternal soul after death, but also during the life in this body as well.  In fact, the ancient Egyptians emphasized the memorizing of certain passages of the Book of the Dead during this life.

Even some of the most modern scholars emphasize the same things.  For example, in his excellent new  (2001) translation of and commentary on the Book of the Dead (using the Papyrus of Hunefer and also the Papyrus of Ani), Dr. Ramses Seleem states:

The roads, ways, gates, hours, laws, and guardians of life after death are explained in detail in The Book of the Dead.  And even though a copy of the book is buried with the deceased, it is better to learn this divine knowledge by heart and live it in this lifetime, so the words can become flesh (truth).  Only then does The Book of the Dead in this life become the book of life in death.  15.

And again, and even more powerfully, he explains:

The spiritual concepts contained in The Book of the Dead explain life in its continuity and the condition of the reincarnated soul both in this life and in the Dwat.  This is in direct contrast to the emphasis on death and dead relics that can often be seen in modern museums. [. . .]

The Book of the Dead is, in reality, the Egyptian book of life -- life now, life hereafter, and life everlasting.  A copy was buried with the deceased to give the soul the tools to secure his or her future in the life hereafter.

The deceased entered Ementet (the land of the dead) with a papyrus scroll in one hand.  The question that lay ahead was how well the deceased person had established truth in his or her lifetime against the powers of evil.  12-13.

All of these assertions correlate very well to the analysis of the self-taught Egypt scholar Gerald Massey, writing for the most part over a hundred years earlier.  Together, they should serve to awaken us to the importance of the concepts that the Egyptians were discussing.

It is also interesting to note that Gerald Massey's discussion of the sevenfold soul, and the discussion that these principles are just as important in this life as in the life hereafter, seems to have some potential correspondence with the fact that the Vedic and Hindu traditions assert that we have seven chakras and that it is vitally important to activate all seven.  This concept would also seem to connect to previous discussions about our vital organs and their connection to the visible planets.

Alvin Boyd Kuhn has stated that Gerald Massey is among the most discerning of the Egyptologists, and that he was "a scholar of surpassing ability whose sterling work has not yet won for him the place of eminence which he deserves."  Perhaps this discussion of the sevenfold soul and the importance of the Egyptian Book of the Dead will stimulate readers to examine his works for themselves.  An excellent list with links to many of his texts can be found here.

Posted by David Warner Mathisen at 12:45 AM