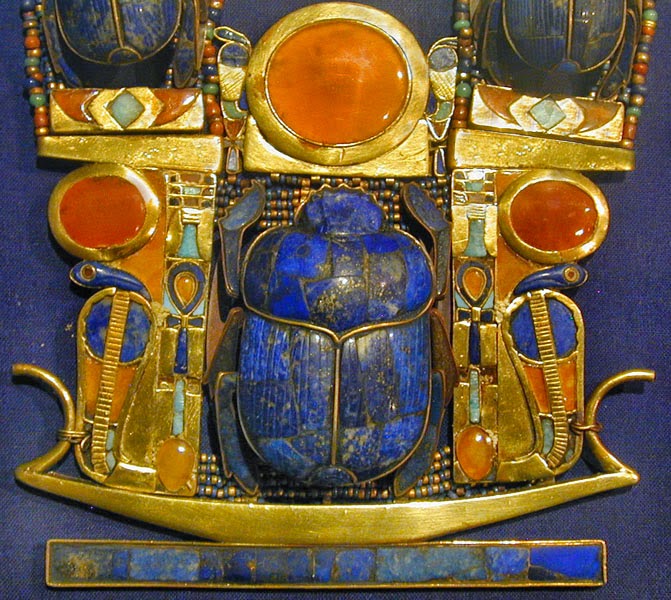 image: detail from necklace found in the tomb of Tutankhamun, Wikimedia commons (link).


The importance of the ancient symbol of the Ankh simply cannot be overstated. It is a symbol of eternal life, and as such it is closely associated with two other important ancient symbols, the Scarab and the Djed-column.

Previous posts have explored the abundant evidence which suggests that the Ankh (along with other cross-symbols) represents the two natures which join together in our human existence: the material or animal nature symbolized by the horizontal bar, and the spiritual nature, symbolized by the vertical column, which in the case of the Ankh is surmounted by the circle representative of the infinite or the unending.

So, the connection between the symbology of the Ankh and the symbology of the Djed is fairly straightforward and easy to understand. But, how are these two symbols connected to the symbol of the Scarab? Let's examine the question more closely -- the answer contains many breathtaking connections and sheds light on the exquisite profundity of the ancient wisdom, bequeathed to us in the mythology and symbology of the human race.

In the image above, an elaborate necklace from the tomb of Tut-Ankh-Amun is depicted, featuring a central figure of a Scarab beetle with uplifted arms, upon what I would interpret as being (based upon evidence presented below) the solar bark. The Scarab is flanked most immediately by two columns which each feature a prominent Ankh symbol (in dark blue) and immediately above each Ankh for good measure is a Djed column (in light blue, with alternating red and blue segments in the "spinal" columns at the top of each Djed).

As can be seen from the image above, this elaborate ornament continues on beyond the section in the close-up view shown above: the wide "straps" of the necklace on either side are adorned with another pair of Scarabs, each of which are surmounted by another solar disc (not shown in the image above), this time in gold, and again flanked by two uraeus serpents. Above these Scarabs and solar discs can be found yet another pair of uraeus serpents (on each "strap"), this time flanking a central Ankh symbol (on each "strap"). For an image showing more of the necklace, see for instance this web page, which appears to be an image of a replica of the original (the image above is from the original found in Tut-Ankh-Amun's tomb).

I believe that all of these symbols are powerfully depicting variations upon the same theme, which is the raising-up of the immortal, spiritual component in the individual, symbolized by the raising of the Djed column, which is associated with the vertical and immortal portion of the Egyptian cross (the Ankh), and which is also symbolized by the vertical line or "column" between the two solstices of the year on the zodiac wheel of the annual solar cycle.

As discussed in this previous post, the vertical pillar of the solstices was connected in mythology with the Djed column raised up, and also with the constellation of Cancer the Crab, the sign which commences at the point of summer solstice (a fact which is commemorated in the name of the Tropic of Cancer, which is the latitudinal circle designating the furthest north that the direct rays of the sun will reach each year, on the day of the northern hemisphere's summer solstice, at the start of the astrological sign of Cancer). Because the constellation of Cancer itself appears to have outstretched or upraised arms, this "top of the solstice column" is mythologically associated and symbolized by the upraised arms of Cancer the Crab -- and, as we have seen in that same post just linked, by the upraised arms of Moses in the battle against the Amalekites in Exodus 17, as well as the upraised arms of the Egyptian god Shu.

And, as that post also points out, the Ankh symbol (which is closely associated with the symbol of the Djed-column "raised up") itself was often depicted with a pair of human arms raised upwards in just the same way (a famous image from the Papyrus of Ani showing the Ankh with upraised arms, surmounting a Djed column flanked by Isis and Nephthys, has been included in several previous blog posts, such as this one).

And with that in mind, we can now understand the symbology of the Scarab, and why it is "of a piece" with the Ankhs and the Djed columns in this necklace!

The understanding that these upraised arms are associated with Cancer the Crab, whose position at the very summit of the year places him at the top of the vertical Djed column that can be envisioned connecting the solstice-points on the zodiac wheel, and whose upraised arms are responsible for the upraised arms that are sometimes depicted on the Ankh-cross, enables us to see that the Scarab itself is another way of recalling Cancer the Crab and the uplifted arms -- symbolic of the vertical, spiritual, eternal force in every man and woman. (Below is an image of the zodiac wheel, with the horizontal and vertical lines depicted: you can see the sign of Cancer with its outstretched arms, looking in this 1618 illustration a bit more like a Lobster than a Crab, at the top of the vertical column and to the "right of the line," just past the point of summer solstice): 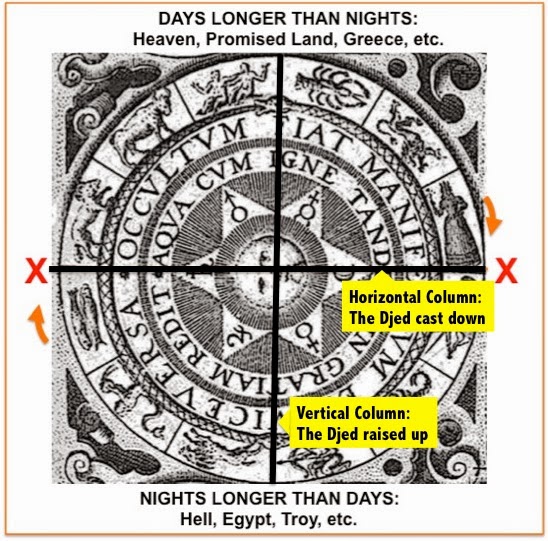 For this reason, we can safely assert that the Scarab in this necklace, surrounded as it is by Ankhs and Djeds, and depicted as it is with upraised arms, is symbolic of the summer solstice, and that the disc above its head must be a solar disc, and the bark on which it and the uraeus serpents are positioned must be a solar bark.

The two serpents, by the way, are also closely associated with the vertical Djed-column -- if we imagine the ancient symbol of the caduceus, we will instantly perceive that these two serpents are positioned on either side of all these central (spinal) column images (the Ankh, the Djed, and the Scarab) in just the same way that the two serpents are positioned at the top of the caduceus column (and intertwine all the way down). The fact that elsewhere upon the same necklace the two serpents are depicted as flanking an Ankh shows that the symbols of the Ankh and the Scarab are closely connected and practically interchangeable here.

As has been explored in numerous previous posts as well, the Djed column is closely associated with the "backbone of Osiris," and hence with the backbone of every incarnated man and woman (Osiris being the deity of the underworld and of our incarnated state, as discussed at greater length in The Undying Stars). Most appropriate it is, then, to note the connection pointed out by R. A. Schwaller de Lubicz (and reiterated by John Anthony West in Serpent in the Sky) between the imagery of the Egyptian Scarab and the top-down view of the crown of the human skull, discussed in this previous post and accompanied by the following illustration: 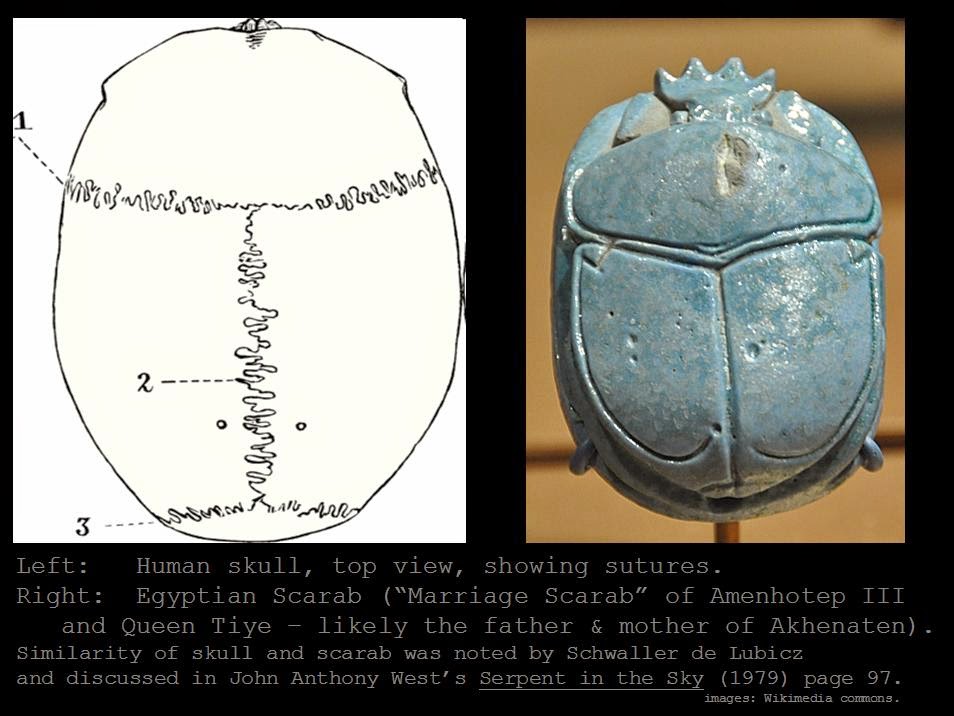 If we consider that the top of the skull forms the very pinnacle of the vertical "Djed-column" in each man or woman, corresponding to the very peak or crown of the year at the summer solstice (representative of Heaven itself as discussed in this previous post, and in its very domed shape most representative of the dome of heaven in the microcosm of the human body, which reflects the macrocosm of the infinite dome of the universe), then it is most appropriate that a Scarab symbol (reminiscent of the sign of Cancer the Crab, which is located at the solstice-summit of the year) is found there on the top of each of our heads!

In a future post we will explore further the significance of the name of the Ankh itself, following on the illuminating analysis of Alvin Boyd Kuhn on the subject. Some aspects of this important concept have already been touched upon, in this previous post about the ancient Vedic concept of the Vajra, or Thunderbolt, which we saw in that post to be almost certainly connected to the concept of the raising of the Djed column and the "backbone of Osiris." There, we saw evidence from the work of Alvin Boyd Kuhn that the "N - K" sound of the name of the Ankh is linguistically connected to the name of the practice of Yoga (or yonga, in which the "N - G" sound is linguistically related to the "N - K" of the Ankh).

This connection to the practice of Yoga is most revealing, in that Yoga itself is a discipline which concerns the raising of the divine spark up through the chakras of the spine and ultimately up and through the crown chakra, located at a point which is associated with the crown of the head, or the "top of the Scarab" described above!

Below is an image from Wikimedia showing practitioners of Yoga with their arms in a very characteristic and significant position: 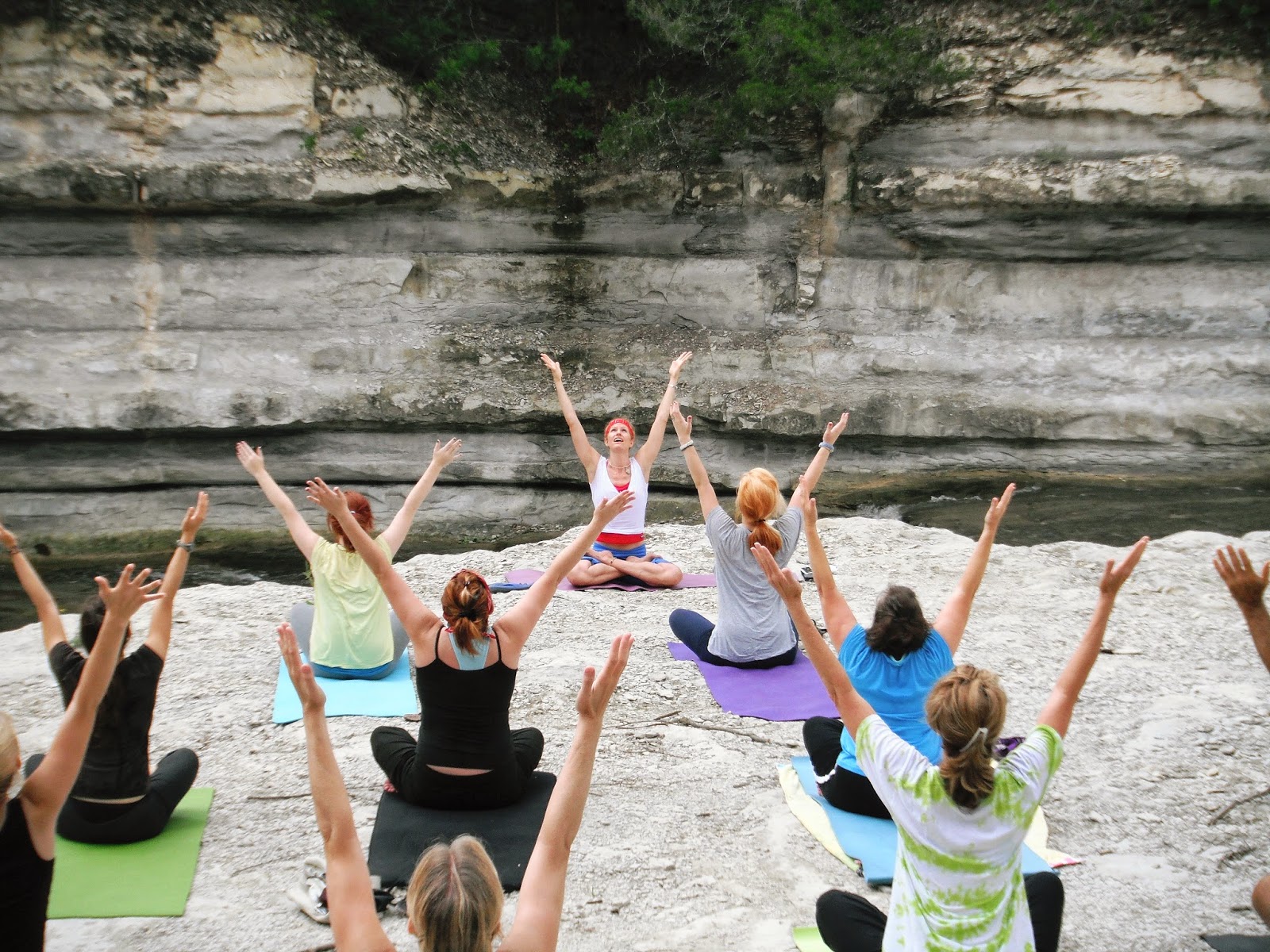 Posted by David Warner Mathisen at 12:01 AM