The sacrifice of Odin 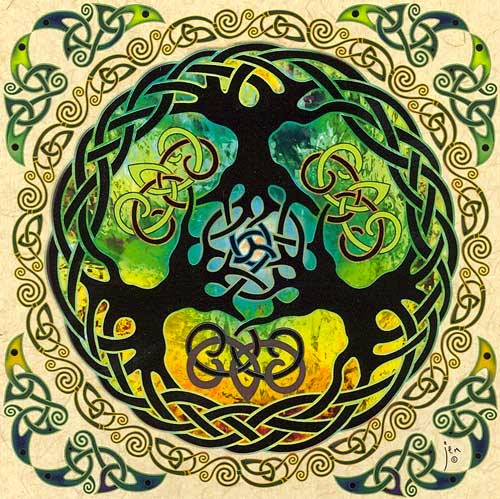 
For the third edition of the "Ankh trilogy" of posts (which began with "Scarab, Ankh, and Djed" and continued with "The name of the Ankh"), let us continue our investigation of this most central theme by looking at the connections to another manifestation of the Cross of Life (which the Ankh and the Djed represent, as does the Scarab with its upraised arms): Yggdrasil, the Tree of Life found in Norse and Germanic mythology.

The World-Tree Yggdrasil is described in the Elder Edda and the Younger Edda as a mighty ash-tree whose roots penetrate to the deepest underworlds and whose branches reach to the highest heavenly realms. At its base is the holy fountain of Urd, associated with the Norns who tend to the Tree and who, the Younger Edda tells us in Chapter VII, "shape the lives of men."

The waters at the foot of the tree are also associated with Mimir's Well. In the Younger Edda, as part of the question-and-answer session between Odin in the guise of Ganglere (might we not read the same "root sound" of "the name of the Ankh" here as well?) and three divinities who are simply named Har ("High"), Jafnhar ("Equally High") and Thride ("Third"), we read:

Then said Ganglere: Where is the chief or most holy place of the gods? Har answered: That is by the ash Ygdrasil. There the gods meet in council every day. Said Ganglere: What is said about this place? Answered Jafnhar: This ash is the best and greatest of all trees; its branches spread over all the world, and reach up above heaven. Three roots sustain the tree and stand wide apart; one root is with the asas and another with the frost-giants, where Ginungagap formerly was; the third reaches into Niflheim; under it is Hvergelmer, where Nidhug gnaws the root from below. But under the second root, which extends to the frost-giants, is the well of Mimer, wherein knowledge and wisdom are concealed. The owner of the well hight Mimer. He is full of wisdom, for he drinks from the well with the Gjallar-horn. Alfather once came there and asked for a drink from the well, but he did not get it before he left one of his eyes as a pledge. Younger Edda, Chapter VII.

This famous incident, of course, is responsible for Odin's having only one remaining eye. But there is another episode in Norse myth in which Odin had to undergo tremendous sacrifice in order to gain wisdom, an episode also closely associated with the holy ash Yggdrasil, and an episode which clearly connects the World-Tree with the concepts and symbology that has been discussed in the previous two posts surrounding the Ankh or Cross of Life, and the Djed-column or Backbone of Osiris: the famous sacrifice of Odin in which he hangs himself upon the tree, described in a somewhat fleeting passage found in the Elder Edda, in the portion known as the Havamal or Hovamol, beginning in stanza 139 (in the online edition of the Elder Edda linked above, it begins on page 59 -- that online text is a little difficult to navigate: the best way is probably to look for the "page numbers" contained within brackets, scrolling down until you reach [59]):

I ween that I hung on the windy tree,
Hung there for nights full nine;
With the spear I was wounded, and offered I was
To Othin, myself to myself,
On the tree that none may ever know
What root beneath it runs.
None made me happy with loaf or horn,
And there below I looked;
I took up the runes, shrieking I took them,
And forthwith back I fell.

This passage describes Odin "raised up" upon the Tree, hanging upon it in a sacrifice or crucifixion, Odin sacrificed to Odin, and through this ordeal after nine full nights he obtains a new vision which he did not have previously -- the vision to see the runes, and to take them up. It is in many ways analogous to the ordeal he had to go through in order to obtain the wisdom of Mimir from the well, and also to the adventure he had to undertake in order to obtain the mead of poetry from Gunnlod, and yet this incident is at once more primordial and defining of the Alfather Odin than any of the others.

It is through this sacrifice that Odin obtains the gift of the runes, the gift of encoding information in symbolic form, the gift of the manipulation of language. We can begin to realize the depth of power that this gift truly contains when we recognize the ordeal Odin had to undergo in order to obtain it.

Previous posts have examined the concept that it is in many ways through language that reality is created and that worlds are shaped. In Genesis, of course, it is through the word of God that all Creation is spoken into existence. Modern science tells us that it is through the combination of the four "letters" (dare we call them "runes"?) in the strands of DNA that all our body's characteristics are spun-out in the cells of our being (perhaps these are the strands that the Norns are spinning?).

And Odin wins the ability to see the runes by his hanging upon the Tree.

Many other researchers have observed that the double-helix shape of the DNA strand recalls quite strikingly the two serpents of the caduceus staff (carried, of course, in Greek and Roman myth by Hermes or Mercury, who is in many ways associated with Odin, interestingly enough). But we have seen in the previous two examinations of the Ankh and Scarab and Djed that the caduceus staff is clearly a "Djed-column" type of symbol, representative of the Backbone of Osiris "raised up," and of the vertical column of the year which reaches from the very lowest pit at the winter solstice to the very summit of the year (highest heaven) at the summer solstice.

Clearly, Odin's hanging upon the Tree relates to this same concept.

This profound episode also relates to the concept of "the shamanic," in that Odin by his ascent to hang on the World-Tree penetrates beyond the realm of the ordinary to bring back knowledge that can be obtained by no other means. This is one of the defining characteristics of the shamanic techniques of ecstasy described in the work of Mircea Eliade (see for instance here and here), and in fact it can be easily demonstrated that shamans around the world often use a vertical pole or "climbing the tree" as part of their shamanic travel. There is clearly a powerful stream of connectivity which flows between the ancient wisdom preserved and conveyed in the myths of Osiris and the Djed, the myths of Odin and the World-Tree, and the shamanic practices of the world.

Finally, we must notice the clear connections between the sacrifice of Odin described above and the sacrifice of Christ on the Cross described in the New Testament. Most obviously, both involve a crucifixion upon a Tree (and the Cross is literally referred to as "the tree" in Biblical verses such as Acts 13:29 and 1 Peter 2:24).

Additionally, in Odin's description of his own sacrifice, he declares that "with the spear I was wounded," which is obviously an element that is present in the sacrifice described in the New Testament as well. Critics might argue, because our records of the Norse myths were written down after Christianity was already known and was spreading throughout Europe, that this element was "imported" into Norse mythology from Christianity, but there is absolutely no evidence that this is the case, and there is no need to assume such an importation. Odin is very closely associated with his powerful weapon the Gungnir, the mighty spear which never misses its target and which Odin used to indicate which force would be victorious when two contending sides met on the field of battle. That he would be wounded by his own spear when he sacrificed himself to himself is clearly not inconsistent with the tenor of what is taking place.

There is also the shout or shriek which Odin utters at the end of his ordeal, when he has finally won the victory and obtained what he sought.

By this episode, and by other arguments I present in The Undying Stars, I would argue that the verses preserved in the Old and New Testaments of the Bible are actually shamanic in nature, and were originally intended to be regarded as such. By the aggressive literalizing that has taken place in history, this shamanic vision (and their connection to the myths of Osiris and Odin) has been covered-over and obscured.

And yet, like the hidden runes which Odin found, which have the ability to carry world-changing information to faraway places and even to distant times (to those not yet born, even), the words and letters preserved in the Bible itself continue to patiently carry their message down through the centuries. Their kinship with the myths of the world, from Egypt to Greece to the lands of the Norse, and to the shamanic practices found across so many cultures, from North and South America to Siberia and Mongolia and Australia and Africa, is undeniable.

Posted by David Warner Mathisen at 8:31 AM