Let me disclose, O Gilgamesh, a matter most secret: The mystery of the Flood


I have encountered so much evidence that the world's ancient myths, scriptures and sacred stories are based on a common system of celestial metaphor that the conclusion is, to me, beyond doubt.

This evidence includes virtually all of the stories included in the texts commonly referred to as the Old and New Testaments of the Bible. My most recent publication, Star Myths of the Bible, stretches to 766 pages, with over 270 color illustrations, including over 130 full-color star charts related to the events and episodes described in the ancient texts -- and even at that length, I had of necessity to leave out many more Star Myths which can be found in the Biblical scriptures and can be shown to be based upon the motions of the sun, moon, stars, and visible planets.

One important episode which is explored in detail is the Deluge or Biblical Flood account, which is clearly based upon specific constellations we can still see in our night sky. The discussion in Star Myths of the Bible also makes reference to the Deluge accounts found in the ancient Mesopotamian texts, which were only re-discovered and translated in the nineteenth century (and subsequent decades).

These accounts, including the account of Uta-napishti (or Utnapishtim) found in Tablet XI of the Gilgamesh series, and the related accounts of Ziusudra in a Sumerian version and of Atrahasis in an Akkadian version, all contain very close parallels to the account of the Biblical Deluge found in Genesis, including common elements such as the reason for the Flood itself, the advanced warning given to a virtuous man who is instructed to build a box-like ark in which to ride out the flood with his family and with animals, the unleashing of waters for a certain number of days and nights (seven days and seven nights in most of the ancient Mesopotamian accounts, and forty days and forty nights in the Genesis account), the opening of a window in the ark and the release of certain birds including a dove (to see if the waters have subsided enough), and the offering of a sacrifice of thanksgiving once the Flood has ended.

The important point to observe is the abundant evidence which can be seen in both the Genesis account and the various ancient Mesopotamian parallels which indicate that the Deluge stories as they are presented in the texts are built upon celestial metaphor from start to finish.

This means that the accounts in the ancient sacred texts are not primarily intended to be understood literally, but rather that they are intended to convey some knowledge other than a record of literal and historical events.

Please note that I did not just say that I do not believe there is abundant evidence on our planet's surface to support the conclusion that the earth has experienced cataclysmic flooding: I believe this evidence is overwhelming, and have discussed it extensively in this blog. However, I am convinced by the evidence in the texts themselves that the Deluge accounts as they are presented in the ancient Mesopotamian tablets and in the Genesis account are based upon celestial metaphor -- and thus were not intended to be understood as literal and historical accounts.

In Star Myths of the Bible I present discussion and illustrations which argue that the overstepping of boundaries which precipitate the unleashing of the Flood, the "windows" or "floodgates" of heaven which are opened up, the "fountains of the great deep" which are broken up, the ark itself, the figure of Noah himself, the animals two-by-two, the "mountains of Ararat" upon which the ark comes to rest, the sending out of the birds to fly to-and-fro, and the altar with the sweet savor or pleasing aroma can all be shown to be related to specific constellations and celestial features in our night sky.

Previous posts on this blog, such as this post, as well as another chapter in Star Myths of the Bible also explore the evidence that the story of Noah and his sons Shem, Ham and Japheth (as well as Noah's vineyard) is also built upon celestial metaphor, which argues very strongly that Shem, Ham and Japheth and the act of walking backwards with the sheet to cover Noah's embarrassed condition are all celestial in nature and are not intended to be understood as literal, terrestrial history of events which took place on earth following the Flood.

But if the stories are not intended to be understood as teaching literal historical events in the ancient past, then what are they intended to convey?

I believe that the ancient Mesopotamian accounts give us a very strong clue.

Uta-napishti greets Gilgamesh with these words (translations are from Andrew George, found in this edition of the Epic of Gilgamesh):

'Why are your cheeks so hollow, your face so sunken,
your mood so wretched, your visage so wasted?
Why in your heart does sorrow reside,
and your face resemble one come from afar?
Why are your features burnt by frost and by sunshine,
and why do you wander the wild in lion's garb?' X. 213 - 218. page 83.

Then Uta-napishti says to Gilgamesh:

The text tells us that this sacrifice produces a sweet savor (the similarity to the Genesis account is very clear), after which the god Enlil, whose name means "Lord Wind," comes to Uta-napishti and his wife. Uta-napishti relates what happens:

'Enlil came up inside the boat,
he took hold of my hand and brought me on board.
He brought aboard my wife and made her kneel at my side,
he touched our foreheads, standing between us to bless us:
"In the past Uta-napishti was a mortal man,
but now he and his wife shall become like us gods!
Uta-napishti shall dwell far away, where the rivers flow forth!"
So far away they took me, and settled me where the rivers flow forth.' XI. 199 - 206. page 95.

Although there is plenty of room for debate over the interpretation of these passages, I would argue that the implication is this: Uta-napishti and his wife achieved "the life eternal, the mystery of the gods" by going through the Flood!

Now, that may not seem very helpful to you and me, since you may be saying to yourself, "Well, that's all very nice for Uta-napishti and his wife -- but I didn't go through that Flood, so it doesn't do me much good to know that."

But that is exactly where we must remember that, based upon what I would argue to be a super-abundance of evidence in the texts themselves, this Flood of which we read in the ancient Star Myths of the world is not a literal Flood!

Of course there may well have been literal flood-cataclysms in earth's ancient past -- I do not deny that and in fact would argue that the evidence for such cataclysms is undeniable. But the account of Uta-napishti in Gilgamesh Tablet XI and the account of Noah and his family in the scriptures of Genesis are esoteric celestial metaphors -- and I would argue that they are intended to teach us about an entirely different Flood: one that each of us goes through and one that in fact each of us is going through right now!

That place "where the rivers flow forth" which Gilgamesh Tablet XI refers to in lines 205 and 206 probably correspond to the celestial features in the vicinity of Pisces, the Great Square, and Cetus: a region of the sky which plays an important role in many of the episodes of the Odyssey as well (the adventures of Odysseus and their possible esoteric meaning are discussed at length in Star Myths of the World, Volume Two).

This metaphor is extremely widespread -- it can be found in the myths and sacred traditions around the world.

In the Mahabharata of ancient India, for instance, the beautiful Draupadi cries out to Krishna during the awful humiliation at the dice-game that she is being dragged down into the Kuru sea (Krishna provides her with divine sustenance and aid during that ordeal). See for instance Mahabharata Book 2, sections 67 and 69.

Here is another previous post which discusses the same concept using some of the profound ancient knowledge that appears to be encoded within the Chinese characters that constitute one of the oldest writing systems still in use on earth today.

I am convinced that the ancient wisdom given to humanity as a precious inheritance in the Star Myths of the World has to do, at one level, with the goal of transcending the "spin cycle" of this incarnate life, and achieving the situation described in the metaphorical language of the myths as finding the life eternal, standing with the gods in assembly, becoming as the gods, and other ways of describing the integration with the divine realm.

In addition to the myths themselves, there are also ancient disciplines which have survived from ancient times which appear to have as their goal the same sort of integration and transformation, including Yoga, Tai Chi, Chi Gung and related forms of internal energy work, Tantric disciplines, shamanic practices, and the many types of meditation which are practiced around the world.

Some of these traditions also contain specific references to the development of the "light body" or the "energy body" or the "diamond body."

I believe that the ancient Flood accounts may have more to do with "crossing the sea in order to gain a light body" than they have to do with historical descriptions of a literal flood on earth -- even though I believe there is plenty of evidence for cataclysmic floods in earth's ancient history.

In fact, we might even go so far as to see a connection to the famous story of the crossing of the Red Sea in Exodus as well, another story which I believe can be definitively shown to be based on specific celestial references (see discussion and video here, as well as extensive discussion in Star Myths of the Bible). As Alvin Boyd Kuhn points out in various writings, our physical human body itself contains a sort of "Red Sea," which means that the "crossing of the Red Sea" can also be understood as a metaphor referring to our sojourn within this incarnate life.

The message of Uta-napishtim to Gilgamesh -- and to us -- is that this crossing of the Flood (in which we are all presently engaged) has a very important purpose, and one which we should not be neglecting.

I believe the message is that we should be paying very close attention to the wisdom in the ancient texts and sacred stories, as well as the practices preserved in some of the disciplines listed above, which give us pointers towards the "mystery of gods" which we should be focused upon as we pass through this Flood. 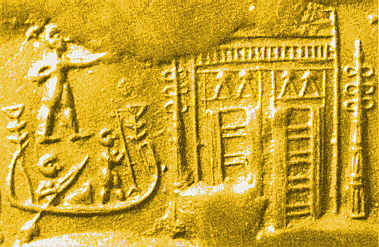