A Ghostly Trio of Haunted Posts for Halloween 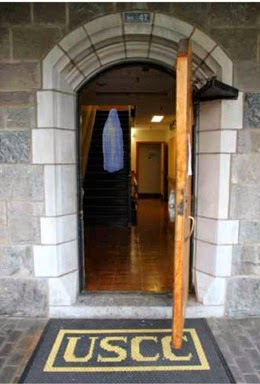 
The important annual holiday of Halloween is upon us, and if you have not already done so, you may wish to go back to the post from a few days prior which discusses the spiritual meaning and symbolism of this annual autumnal festival.

Newer visitors to this blog may not know it, but there have been several ghostly posts from the past which explored the phenomenon of phantoms. Here are some links to a few of them for your All-Hallow's Eve enjoyment!

1. "Scary Ghost Story (West Point)" October 31, 2011.
Perhaps the spookiest of them all, especially because I can well remember some of the first-hand or second-hand stories I heard from other cadets while at West Point of the eerie experiences that would sometimes take place at night in "the Divisions" -- specifically the 47th Division (pictured above). Some of these included awakening in the middle of the night to the feeling of someone or something pressing down on their chest with enough force to make it difficult to breathe.

2. "The Cheltenham Ghost" December 03, 2012.
Account of the apparition seen by numerous witnesses over a period of several years during the 1880s at a house in Cheltenham, England. Guaranteed to send shivers up your spine.

3. "Is the Cavalier Hotel really haunted?" July 12, 2012.
I've been to this hotel myself (a couple of times), and it certainly feels haunted! There have been numerous accounts recorded over the years, which you can explore and evaluate for yourself.

Also, along with its discussion of the concept of houses which seem to have some supernatural presences attached to them, this same post discusses some of the other haunted locations on the old post of West Point, including an old house on "Colonels' Row" which I was told on very good authority has a very strong presence in the upper rooms of the house.