Across the (Electric) Universe 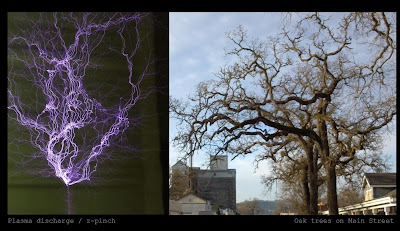 The botanist John Christopher Willis (1868 - 1958), one of the preeminent botanists of his time, believed in evolution but rejected the Darwinian mechanism of mutations plus natural selection.

He wrote several books densely packed with evidence from the world of plants which cast grave doubt upon the origin of species by natural selection, to which we shall return to consider in a future post. For today, however, what I find quite intriguing is the alternative mechanism that J. C. Willis proposed.

In a book entitled The Course of Evolution by Differentiation or Divergent Mutation rather than by Selection (1940), after almost two hundred pages of careful argument, he reaches the following conclusion:

There is thus very strong evidence that evolution has gone on without any direct reference to natural selection so far as we can at present see. [. . .]

Evolution goes on, but we can see no reason at present that will determine that it shall go in any particular direction, especially in one that shows greater adaptation. The mere fact of the survival of the "lower" forms in such numbers, like mosses, ferns, and liverworts, is against the idea of any rapid progress in adaptation, but probably when an "adaptation" appears, such for example as climbing habit, it will be allowed or encouraged to survive, though why it should appear is at present a mystery.

It is an inspiring thought that so great a process as evolution must have been has not been a mere matter of chance, but has behind it what one may look upon as a great thought or principle that has resulted in its moving as an ordered whole, and working itself out upon a definite plan, as other branches of science have already been shown to do. Darwinism made the biological world a matter of chance. Differentiation, backed by the universal occurrence of the hollow curves, shows that there is a general law, probably electrical, at the back of it.

The entire text can be read online in a beautiful online version here. To find the passage quoted above, which is on pages 187 to 188 of the original pagination, slide the pointer at the bottom of the screen to page 198 of the online version.
This is an extremely noteworthy conclusion by a man who did not reject Darwinian natural selection out of religious motivation but rather based upon an extraordinary and distinguished career of examining countless plants from around the globe. He was by no means an idle dreamer but a rigorous and incisive analytical thinker, a man who rose to the top of his profession and was accorded the highest honors of the scientific circles in which he moved.

In the passage cited (you can read the entire discussion, beginning on page 186, and if interested all the supporting evidence in the pages that lead up to it), Dr. Willis affords a place for natural selection, but not as the mechanism of evolution. He in fact argues that Darwin had the "direction" of evolution wrong, and that radical new genera which diverge widely and radically from previous forms arise by some unknown force and then subsequent generations become less and less divergent (the opposite of the Darwinian model -- see discussion in the final paragraph on page 186).

Dr. Willis frankly admits that neither he nor anyone else has a conclusive idea of what could cause these divergences, which he says appear to him to be purposeful rather than random (see the passage cited). He declares that the evidence points to "a great thought or principle that has resulted in its moving as an ordered whole, and working itself out upon a definite plan."

He then proposes that whatever this force or principle is that causes evolution to move "as an ordered whole" that is "working itself out upon a definite plan," that force or principle (or "general law") is "probably electrical." This conclusion is startling and noteworthy.

We should not look down upon these arguments just because they were put forward over 70 years ago, and just because they run contrary to all of the assertions of the Darwinian sect that has controlled the levers of power for the past one hundred or more years. In fact, there are plenty of reasons to believe that the Darwinian model is fatally flawed.

It is also fascinating that Dr. Willis sees some electrical law as being behind the origin of the differentiated families of living things. He could not have known then what we know today: that 99.999% of the visible universe is made up of powerfully ionized gases known as plasmas. Electricity is incredibly important, and incredibly pervasive, and its role in the universe is still only dimly understood.

However, it is perhaps understandable that a man of his obvious analytical ability and with such a deep understanding of botany would perceive the possibility that electricity has more to do with the mysteries of life as we know it than the Darwinists knew. Take a look, for example, at the image above of the plasma z-pinch (which was featured in this previous blog post) juxtaposed with the branching structure of an oak tree in winter in California.
Scientists are only recently beginning to delve into the mysteries of plasma science, but it is certainly safe to point out that there may be some relation between the "general law" governing the behavior of the arcing branches of electrical discharge in the left image and that which is influencing the growth pattern displayed by the branches and twigs in the tree in the right image.

In previous posts, we have looked at some of the work of researchers such as David Talbott, who is working with others on what is known as the Electric Universe Theory. The proponents of this paradigm believe that electricity is the key lens through which to view almost everything. The implications of their analysis is far-reaching -- some of the directions that it leads can be seen in the web page linked above and its related pages linked within, as well as on this different Electric Universe website which has its own set of pages with discussions.

I personally do not subscribe to all of the conclusions reached by these researchers, and have given some of my reasons for that in previous blog posts as well as in some of the Graham Hancock Message Board discussions linked in this post. Nevertheless, I believe the work that Mr. Talbott and other Electric Universe pioneers are doing is vitally important, and commend them for their willingness to challenge the existing paradigm and to follow the evidence where they believe that it is leading. They are working to push human knowledge forward, and whether or not all of their conclusions turn out to be right, it is critically important that these new leads are pursued and their implications explored.

I also do not agree with all of the conclusions reached by Dr. Willis in his analysis of an "electrical" mechanism of evolution. I am not at all convinced that evolution is necessarily responsible for the diversity of life on earth. However, I believe that his arguments about the problems with the currently accepted mechanism for evolution are compelling, and that his sense that there appears to be some "great thought or principle" at work in the universe and behind the diversity of life is probably correct.

His perception that electricity seems to be connected to the same "general law" as that which drives the forms which living organisms take in their endless variety is a unique one, and appears to be quite insightful, and one which cutting-edge research of recent decades is showing to be quite forward-thinking.

These are fascinating topics to ponder. This direction of inquiry has certainly not been exhausted, but represent a field that is still perhaps in its infancy, and one that invites interested analysts to explore it in the years to come. Perhaps you will be one of those who blazes new trails in this promising and fascinating area of study.