Plotinus and the upward way 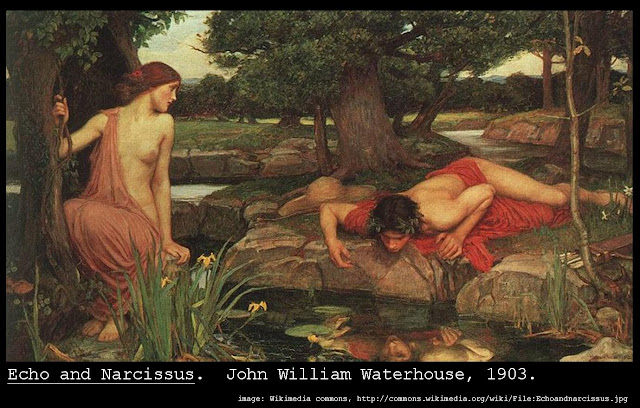 (mobile readers please scroll down to read the post)


A recent post discussed the well-known myth of the Judgement of Paris, and the fact that the second century writer Apuleius (born c. AD 125) somehow saw the "damnation of mankind" as connected to Paris' selling of his vote in that contest for the "lucre of lust."

The philosopher Plotinus (c. AD 204 - AD 270) may be able to shed some light on this interesting comment from Apuleius.  We last heard from Plotinus in the post entitled "giving forth, without any change in itself, images or likenesses of itself, like one face caught by many mirrors," after a line from the First Ennead of Plotinus (Enn.I, 1:8).

This idea of a mirror was clearly central to Plotinus' teaching on the nature of human existence.  Later, in Ennead IV, 3:12, he writes:

The souls of men, seeing their images in the mirror of Dionysus as it were, have entered into that realm in a leap downward from the Supreme: yet even they are not cut off from their origin, from the divine Intellect; it is not that they have come bringing the Intellectual Principle down in their fall; it is that though they have descended even to earth, yet their higher part holds for ever above the heavens.  translation by Stephen MacKenna and B.S. Page, 148.

Thus, Plotinus is teaching that the mirror is a good metaphor for the relationship between the Intellectual Principle and the souls of men.  In an essay entitled "Judaism, Judaic Christianity, and Gnosis," Professor Gilles Quispel explains:

The mirror is a powerful symbol in Greek and Gnostic religion.  Narcissus is said to have jumped into the water and to have embraced his own shadow and to have drowned, when he looked into the water and saw his own shadow and fell in love with it.  This is not true.  For he was not suffocated in the water but he contemplated in the transient and passing nature of his material body, his own shadow, namely the body, which is the basest eidolon of the real soul.  Desiring to embrace this, he became enamoured with life according to that shadow.  Therefore he drowned and suffocated his real soul and a real and true life.  Therefore the proverb says, 'Fear your own shadow.'  This story teaches you to fear the inclination to prize inferior things as the highest, because that leads man to the loss of his soul and the annihilation of the true Gnosis of ultimate reality.  Thus the Anonymus de incredibilibus IX.
Nonnus tells us that the young Dionysus was looking in a mirror when the Titans tore him into pieces [. . .].  57.

Professor Quispel notes that French philosopher Jean Pepin (1924 - 2005) points to the Plotinus passage quoted above as the first conflation of the mirror myth of Dionysus and the reflection myth of Narcissus, which Plotinus combines in Enn. IV, 3:12 to illustrate the condition of the souls of men and women in this world.  Certain ancient traditions appear to have taught that the fall of mankind could be understood through the metaphor of Narcissus (or Dionysus), becoming enamored with a reflection in a mirror.

It is important to note that Plotinus does not teach that love of beauty is bad -- quite the contrary.  In his discussion of "the Upward Way," he notes that there are three paths which lead to the upward way: that of the musician, that of the "born lover," and that of the metaphysician (the philosopher).  In his description of the born lover, Plotinus writes:

The born lover, to whose degree the musician also may attain -- and then either come to a stand or pass beyond -- has a certain memory of beauty but, severed from it now, he no longer comprehends it: spellbound by visible loveliness he clings amazed about that.  His lesson must be to fall down no longer in bewildered delight before some, one embodied form; he must be led, under a system of mental discipline, to beauty everywhere and made to discern the One Principle underlying all, a Principle apart from the material forms, springing from another source, and elsewhere more truly present.  Enn. I, 3:2.

Thus, Plotinus seems to teach that love of beauty is an entry-gate to the upward way, but that the "lesson" for the lover of beauty is to learn to disentangle from being enamored with one specific embodied form (whatever form that lover of beauty is enamored with) and to see that specific form of beauty as a pointer to "beauty everywhere" (this being the very opposite of Narcissus, who could only see beauty in himself), and ultimately to the "One Principle underlying all."  Plotinus says that from there, "thence onward, he treads the upward way."

In other words, although enrapture with the reflection of beauty led to the fall ("a leap downward from the Supreme," Plotinus calls it), love of beauty can lead back upwards, if the process can be somehow reversed (directing the gaze from love of the specific image back to the underlying One Principle).

These passages from Plotinus appear to shed light on the work of Apuleius, and help us to understand what he meant when he said that the Judgement of Paris was somehow the fall of mankind.
Posted by David Warner Mathisen at 12:25 AM