The Year of the Snake 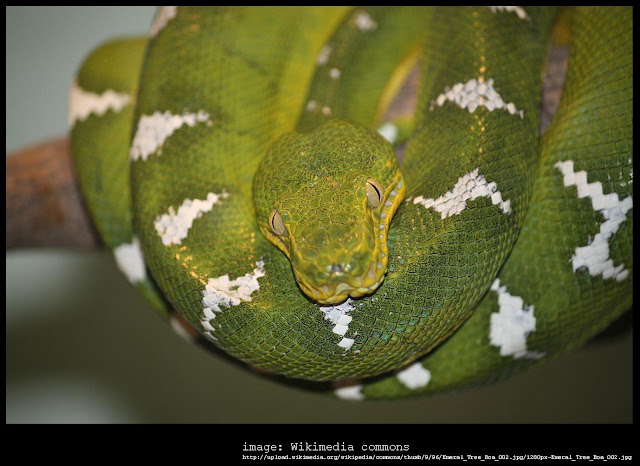 (mobile users please continue to scroll down for the post)

Happy Chinese New Year!  The new moon (when the moon passes most directly between the earth and the sun -- explained in numerous previous blog posts, such as this one) takes place in about an hour from now (as this is published), ushering in the first day of the Chinese lunisolar calendar for this year.

This year is the Year of the Snake.

In his definitive examination of symbolic Egypt, Serpent in the Sky (discussed in previous posts here and here), John Anthony West discusses some aspects of the profound significance of the serpent as a symbol in the ancient esoteric traditions of the world.  Elaborating on the work of R.A. Schwaller de Lubicz, who in Sacred Science wrote "The snake is the symbol of duality: it separates the right and left sides of the brain" (151), Mr. West explains:

At first glance the serpent was the symbol for duality or, more accurately, for the power that results in duality.  And that power is itself dual in aspect; it is simultaneously creative and destructive: creative in the sense that multiplicity is created out of unity, destructive in the sense that creation represents the rupture of the perfection of the Absolute. 70-71.

Interestingly, the reverent examination of the symbolic power of number is most commonly associated with the Pythagorean school (a central topic of Mr. West's Serpent in the Sky), and as Ross Hamilton discusses in his outstanding book probing the amazing Great Serpent Mound in Ohio, Mystery of the Serpent Mound, Pythagoras' name is probably connected to Python, the great serpent or dragon slain by Apollo at Delphi.  In a section of his book entitled "The Python of Protagoras," Mr. Hamilton writes:

Few people know that the proto-philosopher, Pythagoras, is believed so named for the reason that his parents, Mnesarchus and Parthenis (later Pythasis) were deeply impressed by the words of the Delphinian Oracle.  It was prophesied to them that they would have a son who would surpass all other men in beauty and wisdom.  He would be a great benefactor of the human race, and his service would be recognized for generations and generations.  111.

Mr. Hamilton explains the important connection between the serpent Python and the Oracle at Delphi in the previous section, entitled "Apollo and the Python."  He recounts the myth that the god Apollo, wishing to create an oracle, found the perfect location at Delphi, where the formidable serpent Python lived in a deep crevasse or cave in the rock beside a sacred waterfall.  Mr. Hamilton's additional commentary on the well-known myth are very revealing:

It was believed that the Great Serpent had always lived in the "womb" of Gaia and was in fact the mother goddess' original mouthpiece before any formal oracle had been considered.  The Python had survived the great flood or cataclysm from the previous age and was thus the sole transmitter of knowledge to the kings of the world.  Python, however, was not accommodating to the majority of visitors seeking advice and wisdom. [. . .]

In accord with the traditional myth, after the death of the beast, Apollo let the body rot in the sunlight for a while.  He then removed the skin, and carefully slicing the body into a number of parts, threw it down the abyss from whence the serpent came.  Over this entry to the underworld he erected his famous golden tripod, covering it with the skin of the creature like a drum.  Within the tripod, he placed the sacred bones of the Python.  [. . .]

Once this Great Serpent (the Universal Word) was slain and sliced, it fell literally into many distinct "vowels" and "consonants."  Through the interment of the bones beneath the Oracular Seat, the Pythia was able to utter the prophetic truths once reserved only for those bold enough to petition the living Python itself.  109-110.

From the above analysis by Mr. Hamilton, it is clear that the ancients saw a profound connection between the serpent and the giving of wisdom to humanity.

Later in the same book, Ross Hamilton also muses on the connection between the serpent and the phoenix, in that the mythical phoenix was said to grow from a worm that remained in the ashes of the self-immolating and self-renewing phoenix.  In an important passage, he writes: "The worm, serpent, dragon, and phoenix all appear to be linked as successive stages of an ideal belief that the ordinary man and woman may transcend the lower worlds of matter, overcoming all to reign supreme in the principle of the Divine" (134).  In other words, the phoenix may be another embodiment of the concept of the "winged serpent" found in other traditions from other parts of the world, most notably the Quetzlcoatl of the high civilizations of the Americas.

In an inset quotation on the page discussing the importance of the serpent symbol, John Anthony West cites this sentence from page 387 of Peter Tompkins' 1976 book Mysteries of the Mexican Pyramids: "To Sejourne, Teotihuacan was the place where the serpent learned miraculously to fly, that is 'where the individual, through inner growth, attained the category of a celestial being'" (71).

One could go on and on exploring the central importance of the serpent, a symbol which clearly carries a vital connection to revelation, wisdom, and enlightenment.  But, to conclude this short exploration of this profound being, we can return to Schwaller de Lubicz (whose quotation started us on this journey) for a clue as to where this mystical serpent with the power to enable "the ordinary man and woman" to "transcend the lower worlds of matter" may reside. Immediately after telling us that the "snake is the symbol of duality," he says that "It separates the right and left sides of the brain" (151).  He then goes on to say, "Likewise, the nervous system is dual: sensory or motor, active-solar through the sympathetic, or passive-decontractile through the vagus or parasympathetic" (151).

These insights hint to us that this celestial serpent is in fact inside us as well as "in the sky." 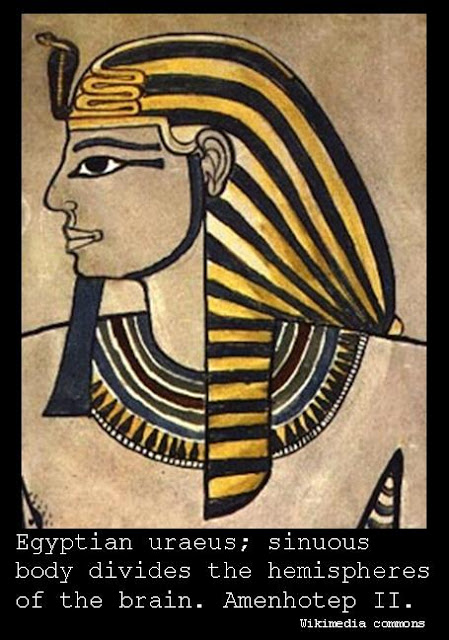 Posted by David Warner Mathisen at 12:09 AM