How did the Maori know Saturn has rings? 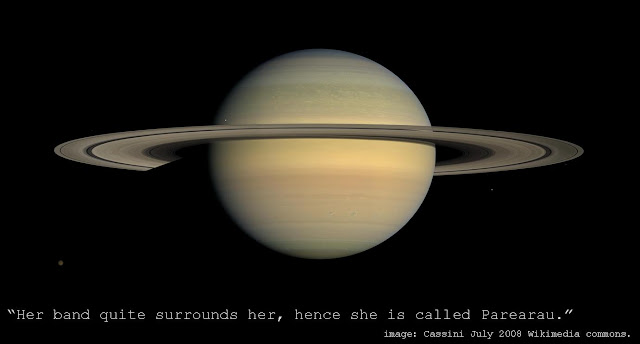 Saturn is now rising each evening in the constellation Libra, a little before 10:30 pm and four minutes earlier each night.  This week's Sky & Telescope "planet roundup" advises observers to look for Saturn "rising well to the lower left of Spica and farther to the lower right of brighter Arcturus. Saturn shines highest in the south in the early morning hours — more or less between Spica to its right and Antares farther to its lower left."

Can you see the rings of Saturn with your naked eye, or even with binoculars?  It seems impossible (I certainly cannot, nor do I know of anyone who claims to be able to do so).  Modern awareness of Saturn's rings did not come about until well after Galileo (Galileo did observe Saturn and the rings in 1610 with his telescope, but not well enough to know what they were -- the world would have to wait another forty-five years before Christiaan Huygens described the rings as a disk around the planet in 1655).

However, there is evidence that the Maori of Aotearoa (New Zealand) were aware of the rings around Saturn.  In The Astronomical Knowledge of the Maori, Genuine and Empirical, published by Elsdon Best in Wellington, NZ in 1922, there is preserved a host of accounts from the Maori themselves of their star-lore and planet-lore.

The entire book is available online for your edification here through The Knowledge Basket, founded in 1994 by two former librarians to provide access to archival content from New Zealand, and although Mr. Best indulges in some unfortunate condescending and paternalistic sentiments (such as his reference to "uncultured races" and "puerile superstitions"), the book itself contains a wonderful treasury of Maori astronomical lore, including Maori names for many of the stars and planets, as well as discussions of celestial navigation.

Among the many fascinating revelations contained in the book is the fact that the Maori name for the sun, found in many of the hakas which are reproduced in the book, is Ra.

Another amazing discussion concerns the celestial body known to the Maori as Parearau.  Mr. Best explains that this name was given to an important bright planet, either Jupiter or Saturn, said to be the leader or "puller" of the Milky Way, and described as having a ring!

Parearau, say the Tuhoe people, is a wahine tiweka (wayward female), hence she is often termed Hine-i-tiweka. One version makes her the wife of Kopu (Venus), who said to her, "Remain here until daylight; we will then depart." But Parearau heeded not the word of her husband, and set forth in the evening. When midnight arrived she was clinging to another cheek, hence she was named Hine-i-tiweka. Parearau is often spoken of as a companion of Kopu. Of the origin of this name one says, "Her band quite surrounds her, hence she is called Parearau."

This planetary knowledge is certainly remarkable, in that even with a telescope, Galileo could not perceive that Saturn has a ring or rings!

Of this amazing perception, Mr. Best writes that it "looks as if our Maori friends can see either the rings of Saturn or the bands of Jupiter with the naked eye."  Back in 1922, when he wrote his book, Mr. Best could not know that astronomers would later determine that Jupiter has rings as well, and so he speculated that if Parearau represented Jupiter, then the "ring" must refer to the bands of clouds across the face of that planet (which are also not visible to the naked eye, or even to the eye aided by binoculars).  While the bands of Jupiter can be seen with a telescope, only the most powerful modern earth-bound telescopes can detect the rings of Jupiter, which were not discovered until unmanned spacecraft passed by the planet in the 1970s.

Another quotation from the Maori about Parearau found in the discussion in Mr. Best's book is cited: "That green-eyed star is Parearau; that is the reason why she wears her circlet."  It certainly seems to have been part of Maori lore that Parearau wears a ring!

Could the Maori really see the rings of Saturn or the bands or rings of Jupiter with the naked eye?  Or, did they have some other way of knowing that Saturn or Jupiter are ringed planets?

If you go out tonight and have a look at Saturn rising in the starry sky, it is certainly something to think on and wonder at.