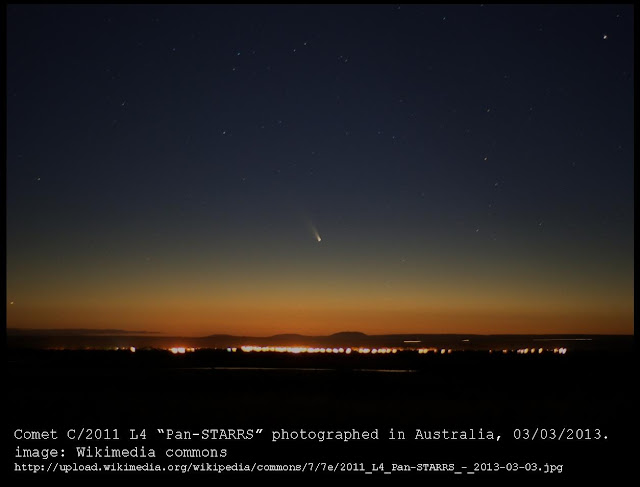 (mobile readers please scroll down to read the actual post)

Comet C/2011 L4 "PanSTARRS" is making its debut to observers in the northern hemisphere, having been visible to those in the southern hemisphere for the past several days.  Above is a beautiful image of the comet, photographed over the Brisbane Ranges west of the city of Melbourne, Australia after sunset on the 3rd of March.

The comet is very close to the sun now, and thus to observe it one must look towards the sun.  However, when the sun is above the horizon, its brilliance drowns out the comet, and so the best time to spot Comet PanSTARRS is just after the rising western horizon comes between the observer and the sun.  As the twilight deepens, the comet will become visible in the darkening sky for a time, until the turning earth causes the comet itself to disappear below the western horizon, following the sun.

Here is a link to a page from Sky & Telescope containing an excellent diagram showing the position of the comet in the western sky for viewers located in the northern hemisphere, starting with its location after sunset on the 7th of March and continuing to show its location each evening through the 20th of March.  Here is a link to another page from Sky & Telescope devoted exclusively to this comet, with a host of beautiful photographs and ongoing updates on the comet's progress.

Here is a link to the outstanding orbital diagram tool for Comet C/2011 L4 on the NASA JPL "small-body database browser" site.  You can use the "sliding bar" controls on the right and below the image to rotate your "view" of the comet, as well as another "sliding bar" control slightly lower down to zoom your view in and out.  You can also change the date on this tool to see where the comet will be on different days, relative to the rest of our solar system.  Here is a link to a previous post (from April of last year) discussing that excellent comet-imaging tool, as well as the connection between certain comets and annual meteor showers.

This recent Reuters article discussing the arrival of Comet PanSTARRS in the evening sky of the northern hemisphere declares that:

Comet Pan-STARRS is believed to be a first-time visitor to Earth after being gravitationally bumped out from the Oort Cloud, a repository of small icy bodies located beyond Pluto in the solar system's back yard.

That popular news stories so matter-of-factly declare that comets get "gravitationally bumped out from the Oort Cloud" in this day and age is remarkable, as there are tremendous problems with this theory of comet origins.  This previous post, entitled "Comet origins and the mysteries of mankind's ancient past" discusses some of the numerous problems with an Oort Cloud origin for comets such as PanSTARRS C/2011 L4.

For starters, as that post explains, the hypothetical Oort Cloud has never actually been observed -- it is a mental construct of scientists who made it up in order to try to model a comet-generation mechanism that would fit the evidence we can gather from the comets we have observed.  As that previous post also explains (following the work of astronomer Tom Van Flandern, 1940 - 2009), the great astronomer Oort himself didn't even believe in the Oort Cloud that was later given his name -- he believed as did Dr. Van Flandern that comets had their origin from within the solar system itself.

Dr. Van Flandern's work, cited in that post, make clear that the hypothetical Oort Cloud is not just "beyond Pluto in the solar system's back yard," either.  If we were to reduce the entire solar system out to Pluto to the size of a dime, Dr. Van Flandern explained, then the supposed Oort Cloud would be over 19 feet away!  Right away, this fact reveals some of the problems with the idea that occasional passing celestial bodies "gravitationally bump" comets out of the Oort Cloud with such precision that they pass through the tiny dime-sized space of the solar system (or the even tinier circle of the inner solar system, where we on earth can see them).  That would be a difficult shot for even the most accomplished pool-hall master, let alone for a random passing star that wasn't even aiming for anything.

In his online book on the hydroplate theory, Dr. Walt Brown devotes an entire chapter to the origin of comets.  There, Dr. Brown gives extensive evidence that conventional theories (such as the Oort Cloud model) purporting to explain the origin of comets are incorrect.  He then provides evidence that comets originated inside the solar system, just as Dr. Van Flandern and Dr. Jan Hendrik Oort believed as well.  However, unlike Dr. Van Flandern's theory that comets came from an exploding watery planet formerly located in the orbit now occupied by the asteroid belt, Dr. Brown believes they originated from a different watery planet: our earth!

Dr. Brown gives extensive evidence, including evidence recently discovered about the composition of a different comet, Tempel 1 in 2005, that strongly supports his theory that comets originated during the explosive event in earth's past that initiated a catastrophic global flood and ejected water and other materials right out of the earth's orbit.

If he is correct, then Comet PanSTARRS is not a "first-time visitor" to our planet at all, although this may well be the first time it has re-visited the inner solar system since it was first ejected into deep space.

In any event, there will be plenty to marvel at over the next several evenings as you gaze at the heavenly spectacle of the visiting comet, and ponder its long and lonely travels through space and into your field of view.