Virgo rising in the east 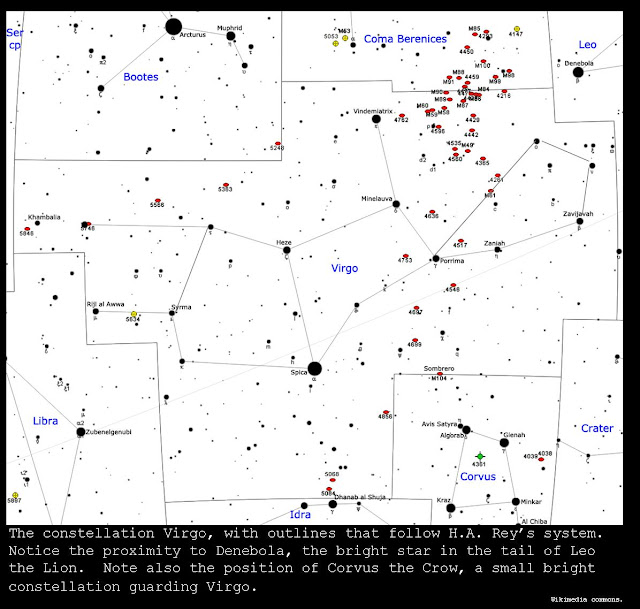 The constellation Virgo is rising in the east after sunset, and this is an excellent time of year to observe this important celestial figure.  The diagram above shows the stars of Virgo, and I have added a few connecting lines to illustrate the outline devised by H.A. Rey, whose system for envisioning the constellations is much better than the outlines usually drawn in other guide-books for the night sky.  Here is a link to an earlier blog post with a diagram of Virgo, in which I have also added the outlines suggested by H.A. Rey.

Virgo follows closely behind Leo the Lion, and the diagram above shows the very tail-end of Leo in the upper-right corner, where the bright star Denebola of the Lion's tail is visible.  You can see how close the faint stars that make up the head of Virgo are to the tail of Leo.

Virgo's brightest star is Spica, unmistakeable and easily found by following the "arc" of the Big Dipper's handle to Arcturus (shown in the upper-left of the image above and discussed in greater detail in this previous post) and continuing along the same arc through Arcturus to Spica.  If you are not yet familiar with the constellation Virgo, this method is probably your best way to quickly locate Virgo's brightest star, rising in the east (clearing the horizon soon after 7 pm in the upcoming nights, for observers located around thirty-five degrees north latitude, and crossing the meridian not long after midnight).

A distinctive feature of the constellation Virgo is her outstretched arm, marked by the star Vindemiatrix ("The Vine" or "The Branch").  This star is labeled in the above diagram, as well as in this discussion of the star's significance in myth and history from the "Constellation of Words" website.

Another distinctive constellation which you will be able to spot once you find Spica is the bright group of stars that make up the constellation Corvus the Crow, discussed in detail in this previous post.  That post explores some of the ancient myths in which a crow guards a princess, the mother of Asclepius, while she was with child.

We know that Plato records the last words of Socrates to be "Crito, we ought to offer a cock to Asclepius.  See to it, and don't forget."  The connection between Asclepius and the offering of a rooster is no doubt connected to the myth of the celestial bird which watched over the mother of Asclepius, and which you can see in the night sky still fixated upon the constellation Virgo.

The rising of Virgo out of the east, as she is doing now, is also very likely associated with the birth of Aphrodite or Venus out of the sea.  In Hamlet's Mill, the authors present extended discussions with evidence that ancient sacred traditions used the metaphor of "rising out of the sea" or going "down to the sea" to describe a constellation rising above the horizon in the east or sinking down below the horizon in the west.

The connection of the constellation Virgo with the sea is evident in the symbol of the astrological sign of Virgo, which is derived from the letter "M" and which is associated with linguistic roots for the sea (mare) and for the feminine qualities of matter, magnetism, and materiality (as well as the "matrix" or womb, where the pattern provided by the DNA takes on its material form).

We have also seen previously that the constellation Virgo is the image of the Great Goddess in many ancient traditions, including Rhea, Cybele, and Ishtar, all of whom were often depicted as riding upon a lion, riding in a chariot pulled by a lion or lions, standing upon the back of a lion, or reclining in a throne flanked by lions.  For further discussion of this subject, see the post entitled "Ever wonder why Ishtar, Cybele, Rhea and other aspects of the Great Goddess ride lions?"

The constellation Virgo clearly has tremendous significance throughout the ancient sacred traditions of the world.  The upcoming days and weeks offer a wonderful opportunity to see Virgo rising in the east with her outstretched arm, as the Beehive passes high overhead, and the glorious constellation of Orion followed by Sirius and Canis Major descend in the west, all taking place in the viewer-friendly hours before midnight.
Posted by David Warner Mathisen at 12:01 AM