Birthdate of H. A. Rey 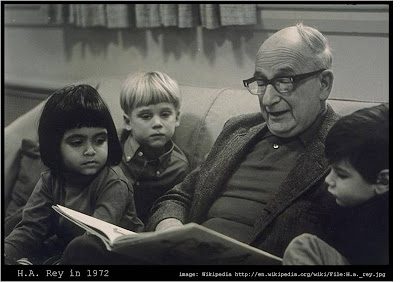 September 16 is the birthdate of the wonderful author H. A. Rey (16 September 1898 - 26 August 1977), best known for the Curious George books, which he created along with his wife Margret.

Rey's books on the stars also contain lucid explanations (with excellent and helpful illustrations) of the concept of the zodiac, the declination and right ascension of stars, the phases of the moon, and the precession of the equinoxes.

Rey's personal life involved escaping with his wife from the Nazi occupation of Paris just in time with the help of two bicycles that he assembled from spare parts. The story is related by Garrison Keillor in today's "Writer's Almanac." Both Rey and his wife were Jewish.

He was born Hans Augusto Reyersbach in Hamburg, Germany.

The world is immensely richer for his life.
Posted by David Warner Mathisen at 9:47 AM