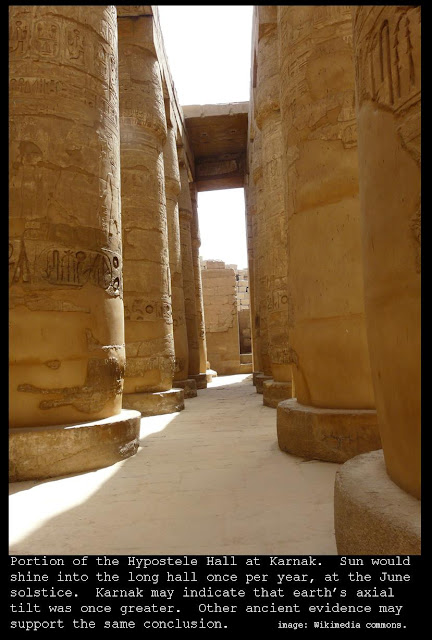 In the previous post, we saw a video in which archaeoastronomer and physicist Dr. Thomas G. Brophy analyzed the layout of stones at the ancient stone circle located in the Nabta Playa in a desolate corner of southwestern Egypt.

One of the startling aspects of Dr. Brophy's analysis is the fact that calculations of the rate of tilt in Orion, caused by precession, means that the stones representing the belt stars are correct for the period from about 6500 BC up until about 4900 BC, while the stones representing the head and shoulders of the constellation are correct for a much older period, centered on 16,500 BC!

While it is certainly possible that the site's ancient designers were able to calculate the precessional tilt for a period around 16,500 BC, and encode that in the site (especially given the other very advanced skills and knowledge of astronomy that the other aspects of Nabta Playa's monuments appear to demonstrate), it is also possible that archaeoastronomers are mistaken in their calculation of the number of years we would have to go back in order to get Orion to tilt as much as is depicted by the head-and-shoulders stones at Nabta Playa.

There is independent evidence, however, that the tilt of earth's axis relative to the plane of the ecliptic was once violently disturbed, after which its tilt recovered, and that the rate of recovery was faster immediately after the violent ancient disturbance, and has slowed down since then.  If this scenario is correct, then Nabta Playa, while still of extreme antiquity, might represent time periods slightly more recent than those calculated using formulas that do not take into account the more-extreme axial tilt of the earth in ancient times.

In his book presenting the hydroplate theory (the 9th edition of which is now available in its entirety for viewing online here), Dr. Walt Brown discusses the evidence compiled by professional astronomer George F. Dodwell over the course of his career.  In the chapter of his book entitled "The Hydroplate Theory: An Overview," Dr. Brown has a subsection entitled "Changing Axis Tilt" (located near the bottom of this page on his website) which explains:

George F. Dodwell served as the Government Astronomer for South Australia from 1909 to 1952. In the mid-1930s, he became interested in past changes in the tilt of the earth’s axis. He collected almost 100 astronomical measurements made over a 4,000-year period. Those measurements show that the tilt of the earth’s axis smoothly decayed from 25°10' to its present value of 23°27'. Based on the shape of the decay curve, Dodwell estimated that this axis shift began in about 2345 B.C.28

George Dodwell's own manuscript discussing the extensive evidence he collected from history documenting this conclusion can be found online here, on the website of  Barry and Helen Setterfield.  It is fascinating reading, full of details from ancient records of the obliquity of earth's tilt with respect to the ecliptic plane, including records and monuments from ancient China, ancient Egypt, and from classical astronomers from ancient Greece up through the Middle Ages and into the modern period.

One example given by Mr. Dodwell is the famous Temple at Karnak in the ancient Egyptian city of Thebes (a portion of which is pictured in the image above), where the rays of the rising sun would enter the long Hypostele Hall of the Temple of Amun-Ra once per year at the summer solstice.  The sun does not go far enough north in its annual migration between the solstice rising points to shine along the original axis of this hall today, and calculations based on a constant rate of change due to precession yield a date of initial design and construction that appears to be earlier than the epoch in which archaeologists believe the temple was designed and built.  Mr. Dodwell explains, however, that calculations which take into account the more extreme tilt and the rate of decay he found from ancient records and monument around the globe would yield a more consistent date.

The upshot of all his careful examination is the irresistible conclusion that the earth's tilt was much greater the further back in time one looks, such that the line of the tropics (the Tropic of Cancer and of Capricorn) came further north and further south of the equator in ancient times, and the northernmost and southernmost risings of the sun on the summer and winter solstices were further north and south along the eastern horizon than they are today.  A curve drawn through a graphing of the obliquity measurements throughout the centuries shows a decay curve indicating a massive force imparted an unusual and excessive tilt to earth's axis, which has been correcting since that time, with the rate of correction much faster in the centuries immediately after the catastrophe (whatever it was) and the rate of correction slowly and asymptotically approaching the current angle of tilt.

In other words, if we project back in time without taking this curve into account, we will be unaware of the much more rapid rates of change that took place in ancient times, and our calculations will be in error.  This possibility is something that analysts of Nabta Playa should consider.  Nevertheless, Dr. Brophy is certainly to be commended for his incredible analysis of this relatively recently-discovered archaeological site, and the possibility that the site encodes knowledge of axial tilt that may have been made more severe and may have changed more rapidly due to an ancient catastrophe does nothing to take away from the amazing implications of the monuments in the desert at Nabta Playa.  In fact, the possibility only adds to its significance, in my opinion.

While George Dodwell believes that an ancient asteroid impact with earth might have been the violent force that knocked earth's axis out of kilter and from which the axis has been recovering ever since, Dr. Brown provides cogent arguments to reach a different conclusion.  Among Dr. Brown's arguments are problems with the asteroid theory, and the argument that if the hydroplate theory is correct, then the events surrounding the flood would have rapidly altered the balance of the earth (principally through the rapid pushing up of the earth's major mountain ranges, and especially the Himalayas).

The rapid formation of the Himalayas, according to the principles of physics, would have led to "Earth's Big Roll," an event for which there appears to be extensive evidence around the world, including in the continent of Antarctica, in certain features under the Indian Ocean, and in areas of the far north in the Canadian Arctic Archipelago (among other places on earth).  To review some of this amazing evidence please visit some of the previous posts on that topic, including: