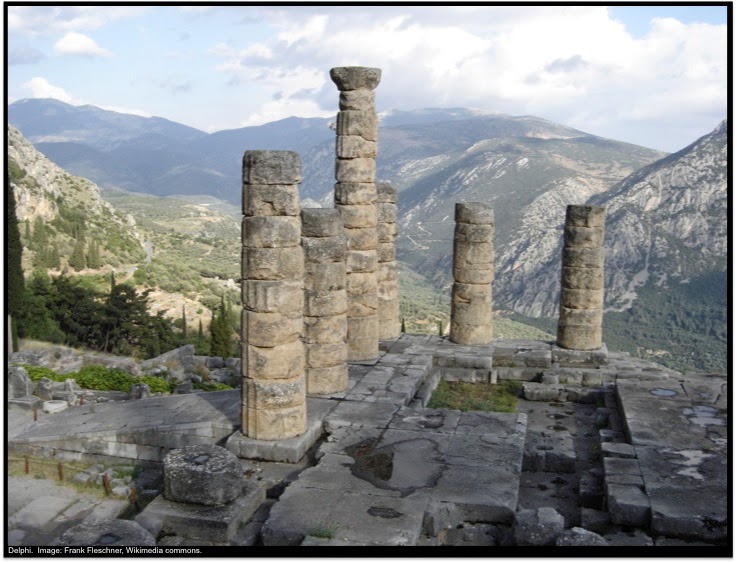 In an important dialogue by Plato known as the Phaedrus, the discussion examines the subject of self-knowledge, the meaning of the concept of "knowing oneself," and the role of love in that quest for self-knowledge.

The command to "know thyself" was famously said to have been inscribed upon the temple at Delphi, and Plato has Socrates refer somewhat ironically to this famous dictum early in the Phaedrus.  As Socrates and Phaedrus are walking along the path of the stream of the Ilissus, Phaedrus asks Socrates whether  he was correct in deducing that it was "somewhere about here that they say Boreas seized Orithyia from the river" (referring to a famously beautiful daughter of a legendary king of Athens, who was seized by the god of the north wind, Boreas, and carried away to be his bride, becoming the mother of two of the heroes who sailed on the Argos in search of the Golden Fleece -- the incident is described by the later Roman poet Ovid in Metamorphoses Book VI, lines 979 through 1038).

Socrates says he believes the abduction took place about a quarter of a mile lower down, and not where the two are currently walking.  Phaedrus then asks Socrates whether he believes the story to be true.

Plato has Socrates reply with a wonderful passage in which Socrates says he would be "quite in the fashion" if he disbelieved the tale, and if he came up with some kind of rationalistic explanation for the mythological story, such as if he were to soberly explain that the myth originated when the maiden was blown by a gust of wind over the edge of some steep rocks to her death (quotations from the Phaedrus used in this discussion come from the translation of Reginald Hackforth, 1887 - 1957).

Socrates then goes on to say that such theories are "no doubt attractive" but are merely the "invention of clever, industrious people who are not exactly to be envied," (a masterful example of "damning with faint praise") -- in other words, that those pedantic scholars who spend their time trying to reduce mythological stories to literal episodes from some imagined history are completely misguided, and that those who indulge in manufacturing such theories deserve more to be pitied than to be taken seriously.

Plato then has Socrates declare of those who want to reduce every myth to some kind of historical, literal episode:

If our skeptic, with his somewhat crude science, means to reduce every one of them to the standard of probability, he'll need a deal of time for it.  I myself have certainly no time for the business, and I'll tell you why, my friend.  I can't as yet 'know myself,' as the inscription at Delphi enjoins, and so long as that ignorance remains it seems ridiculous to inquire into extraneous matters.  Consequently I don't bother about such things, but accept the current beliefs about them, and direct my inquiries, as I have just said, rather to myself, to discover whether I really am a more complex creature and more puffed up with pride than Typhon, or a simpler, gentler being whom heaven has blessed with a quiet, un-Typhonic nature.  By the way, isn't this the tree we were making for? 229e - 230b.

It is undoubtedly no accident that Plato has Socrates refer to the inscription from the temple at Delphi at this particular point in the dialogue, nor that Socrates illustrates his ongoing quest to obey that dictum with a reference to a mythological being (Typhon, and the question of whether or not he, Socrates, is "more puffed up with pride than Typhon").

Through Socrates, Plato is here clearly slamming those who completely miss the point of the "ancient treasure" of mythology, and telling us in no uncertain terms that the purpose of the myths is not to preserve some historical, literal event from the past (albeit in slightly exaggerated form, with a girl falling to her death from some rocks transformed into a beautiful maiden being abducted by the god of the bitter north wind), but rather that the purpose of the myths has to do with the Delphic inscription "KNOW THYSELF."  To drive the point home, Plato has Socrates illustrate by telling Phaedrus that he himself applies the myth of Typhon to his own examination of himself, and the danger of becoming "puffed up with pride" (like Typhon).

This little passage from the Phaedrus, it seems, sheds some extremely helpful light on the famous dictum from Delphi.   It reveals that, far from being a mere collection of fanciful tales, or even a compendium of ancient historical events embellished with touches of the fabulous, the sacred myth-traditions of the world were actually an exquisite set of instruments designed to facilitate the quest for self-knowledge, and the removal of the ignorance which Socrates says should be the primary object towards which we devote our time and energy.

But how, exactly, do the sacred mythologies enable us to emerge from our state of ignorance into greater self-knowledge?

As the conversation in the Phaedrus moves on from the above passage, it plunges first into a discussion of the nature of love, and then proceeds from there into a discussion of the soul and its incarnation.  In 245c - 245e of the dialogue, Socrates determines from his foregoing examination of love that the soul is immortal, that it comes into a body and "besouls" the body, and that (at the beginning of section 246), that "it must follow that soul is not born and does not die."

This, in fact, is precisely what the ancient mythologies of the world teach us, using an exquisite system of metaphor, according to the penetrating analysis of Alvin Boyd Kuhn, in works such as his Lost Light (1940).  Through their beautiful allegories, the myths are teaching us just what Plato has Socrates expounding in the Phaedrus: that soul is immortal, that we descend into the body only to rise up again into the world of spirit, and descend into the body again, as many times as necessary to obtain the gnosis (and overcome the ignorance) that Socrates and the inscription at Delphi are talking about.

In fact, we could tentatively explicate the myth of Orithyia being seized by the wind-god from the river as a metaphorical depiction of the aspect of the soul's journey when it leaves the world of the incarnation (the river, or the body -- the body being composed largely of water and minerals, the lower elements) and returns again to the realm of the spirit (the realms of air and fire, the higher elements or those more illustrative of the spiritual sphere).

The later philosopher (and priest of the oracle at Delphi) Plutarch, in his own dialogue examining the meaning of the inscriptions at Delphi (including the mysterious inscription of the letter "E" at Delphi, which is a subject for another discussion at another time), certainly seems to hint at the same interpretation.  In his famous essay On the 'E' at Delphi, Plutarch puts these words into the mouth of his own mentor, Ammonius (beginning in section XVII and carrying on into section XVIII and XIX):

All mortal nature is in a middle state between becoming and perishing, and presents but an appearance, a faint unstable image, of itself.  If you strain the intellect, and wish to grasp this, it is as with water; compress it too much and force it violently into one space as it tries to flow through, and you destroy the enveloping substance. [. . .]  "It is impossible to go into the same river twice," said Heraclitus; no more can you grasp mortal being twice, so as to hold it.  So sharp and so swift its change; it scatters and brings together again, nay not again, no nor afterwards; even while it is being formed it fails, it approaches, and it is gone.  Hence becoming never ends in being, for the process never leaves off, or is stayed. [. . .]  Yet we fear (how absurdly!) a single death, we who have died so many deaths, and yet are dying. For it is not only that, as Heraclitus would say, "death of fire is birth of air," and "death of air is birth of water"; the thing is much clearer in our own selves. [. . .] What then really is?  That which is eternal, was never brought into being, is never destroyed, to which no time ever brings change."

This concept is closely related to the discussion posted over a year ago concerning the myth of Narcissus, a discussion which helps to outline the importance of the concept of love in this whole discussion (the concept of love being the springboard in the Phaedrus which Plato uses to launch into his examination of this topic).  In a post examining some of the assertions of the neoplatonic philosopher Plotinus entitled "Plotinus and the upward way," we saw that

Plotinus seems to teach that love of beauty is an entry-gate to the upward way, but that the "lesson" for the lover of beauty is to learn to disentangle from being enamored with one specific embodied form (whatever form that lover of beauty is enamored with) and to see that specific form of beauty as a pointer to "beauty everywhere" (this being the very opposite of Narcissus, who could only see beauty in himself), and ultimately to the "One Principle underlying all."

Again, this conclusion has strong resonances with the theme of Plato's Phaedrus.

As we begin to wrap up this examination, we might pause on the myth-metaphor of Narcissus, another figure who (like Orithyia) is pictured next to an enchanting body of water.  As we saw in that previous examination of Narcissus, certain ancient philosophers appear to have interpreted his myth as symbolic of the descent of the soul into this incarnational world, and his fate as a warning against certain tendencies (perhaps even tendencies related to those which Socrates examined himself for, when he referenced the puffed-up self-pride of Typhon).  Socrates would surely laugh at us and imply that we were wasting our time if we were to try to go on a scholarly quest to uncover the "historical Narcissus" and to identify some particularly handsome or vain young prince from history who might have inspired the "legend of Narcissus."  Such stories are intended to provide us with a tool for self-reflection and ultimately self-knowledge, knowledge about the human condition and our purpose in this life (or this incarnation, if you believe the interpretation that the ancients and Alvin Boyd Kuhn espouse).

If the famous command from the oracle at Delphi to "Know thyself" was intended to tell us to learn that (in Plato's words) our physical existence is temporary and that in reality, "soul is not born and does not die," and that (in Plutarch's words) "we fear (how absurdly!) a single death, we who have died so many deaths," then it follows that those who -- either mistakenly, or malevolently -- try to reduce the myths to literal or historical interpretations are doing the world a great disservice.  They are placing a tremendous obstacle in the path of those who would learn the truth about the human condition, knowledge which is essential in the pursuit of that Delphic command.

Unfortunately, such "clever, industrious people who are not exactly to be envied" are perhaps even more prevalent in our day than they seem to have been in the time of Plato, Socrates, and Phaedrus.

Posted by David Warner Mathisen at 1:05 AM