A universe within a grain of wheat . . . 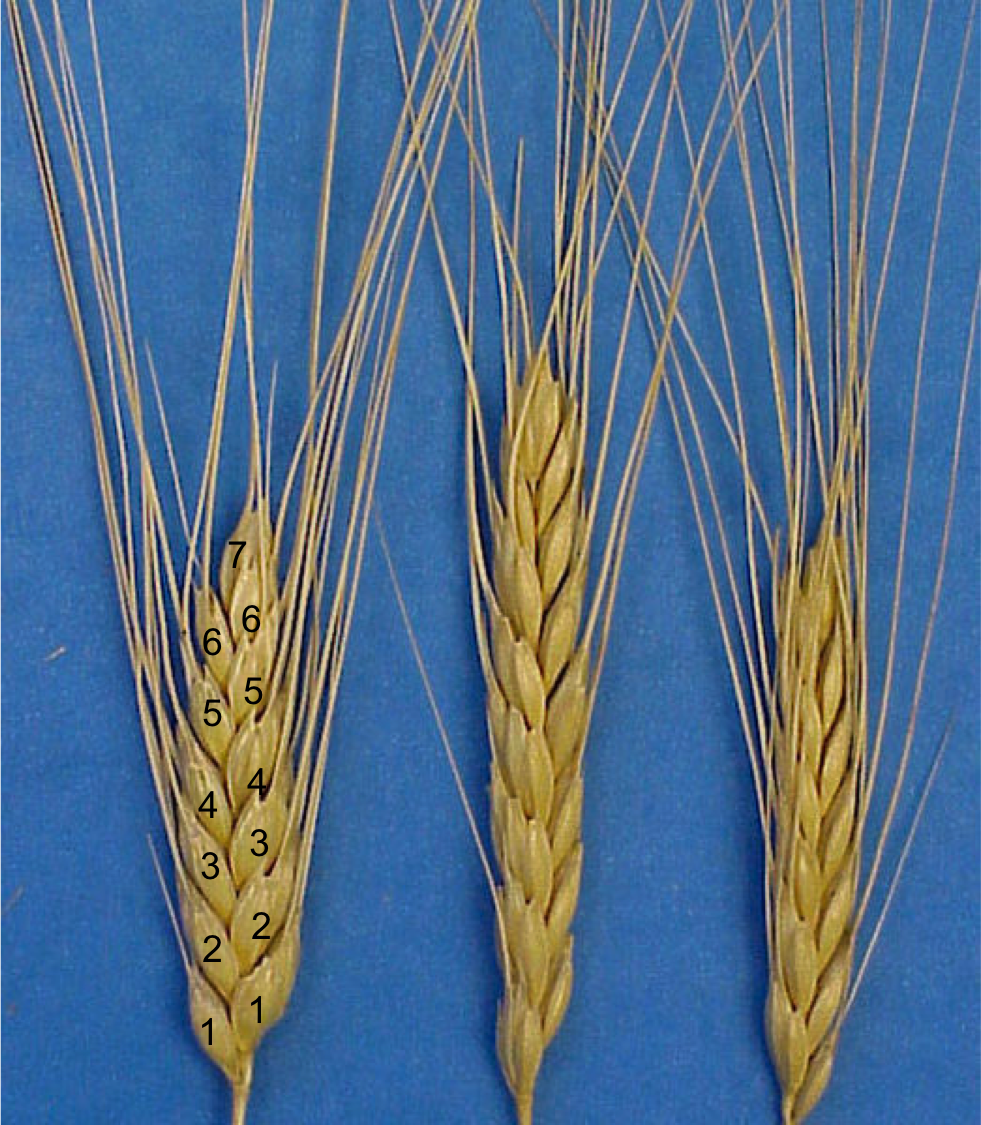 
The previous post explored the concept of chiasm, an ancient literary structure present throughout the scriptures of the Old and New Testaments of the Bible but also throughout the ancient literature of the Mediterranean, characterized by an "X"-shaped mirroring (or "inverted parallelism") on either side of a central pivot.

We saw that this mirror pattern is identical to the gematria pattern discovered by Marty Leeds for the 26 letters of the modern English alphabet, in which the two halves (or "two hands") of 13 letters each can each in turn be viewed as a sort of chiasm, consisting of the numerals 1-2-3-4-5-6 mirrored on either side of a central 7.

We also explored the possibility that this chiastic structure metaphorically conveys an esoteric message about the "as above, so below" structure of the universe, which by extension can also be seen to convey a message about the interconnectedness of the realm of matter and the realm of spirit (the celestial realm -- the "above" -- can be demonstrated to have been used in ancient myth from Egypt to the Americas as representative of the spirit realm).

The literary pattern of the chiasm pulls the reader or listener along to the central point of contact between the two mirroring triangles in the "X"-pattern, and across to the "other side," just as sand in an hourglass begins in one triangular or cone-shaped vortex and is pulled inexorably through the central pivot-point or hinge-point to the other side.

In the video embedded in that previous post discussing Marty's cipher, Marty discusses some of the amazing discoveries that the "central-7" gematria reveals, and at one point in the video (beginning at about the 21:00-minute mark) he discusses an image containing a menorah (which itself can be said to have a sort of chiastic structure of inverse parallelism around a central point) and two grains of what may be wheat, each containing 13 leaves arranged in a chiastic structure with six leaves on either side and a single leaf acting as the central pivot, exactly paralleling the proposed gematria of the English alphabet.

Not long after viewing that video and being amazed at that image, I was making some Norwegian crepes for breakfast (see previous discussion at the end of this post) and could not help but examine the depiction of two grains of wheat on the package of flour I was using: 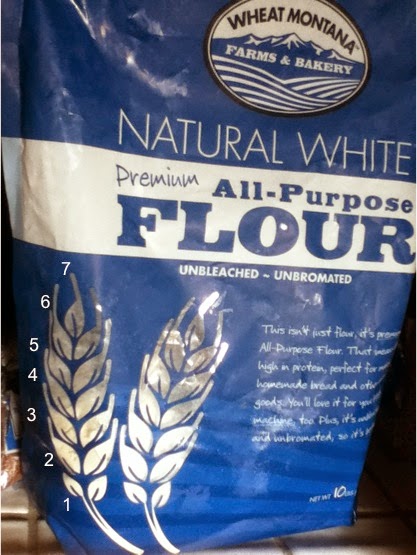 Sure enough, there were "the two halves of the alphabet," embodied in two grains of wheat containing 13 kernels apiece, each arranged with a "central-7" and six mirrored on either side -- a chiasm.

As it turns out, actual grains of wheat themselves often appear to have rows of six growing on either side of a central seventh, as shown in the image at top, and so there is no need to suspect that the designers of this bag of flour watched Marty's video or deliberately referred to the two grains of wheat depicted on either side of the menorah -- the artist may simply have been looking at an actual grain of wheat. But it is certainly interesting that wheat appears to arrange itself in this pattern, the same pattern upon which the modern English alphabet can be seen to be arranged.

It is even more interesting in light of the chiasm discussion from the previous post, in which we saw that the chiasm structure itself appears to be conveying deep truths about the presence of an invisible spirit world which mirrors this one (or, perhaps more precisely, an invisible spirit world which this one mirrors), and directing us towards the point of connection or contact between these two worlds (the central pivot of the chiasm).

If this interpretation of the chiastic structure is correct, then perhaps the grains of wheat with their inherent chiastic structure could symbolize the same teaching. Perhaps each grain of wheat is itself a little picture of the universe, and not just the material universe but the chiastic universe, composed of a spiritual realm and a material realm which mirror one another, and which are connected by the central point of interplay.

This possibility is strengthened by the fact that in the system of celestial metaphor which underlies the myths of the world, the incredibly important constellation of Virgo (who is the "star" of a large proportion of the sacred myths, as can be seen by reading through some of the explications of Star Myths that I have indexed here) was depicted as holding a sheaf of wheat, associated with Virgo's brightest star, Spica.

An artist's rendering of Virgo holding her sheaf of wheat is shown below (this particular diagram is not very helpful for actually finding Virgo in the sky, and has been discussed in this previous post as an example of why the excellent outlines proposed by H. A. Rey are so important for helping you to actually see the constellations in the night sky -- and for helping you to understand their correspondence to ancient myth). 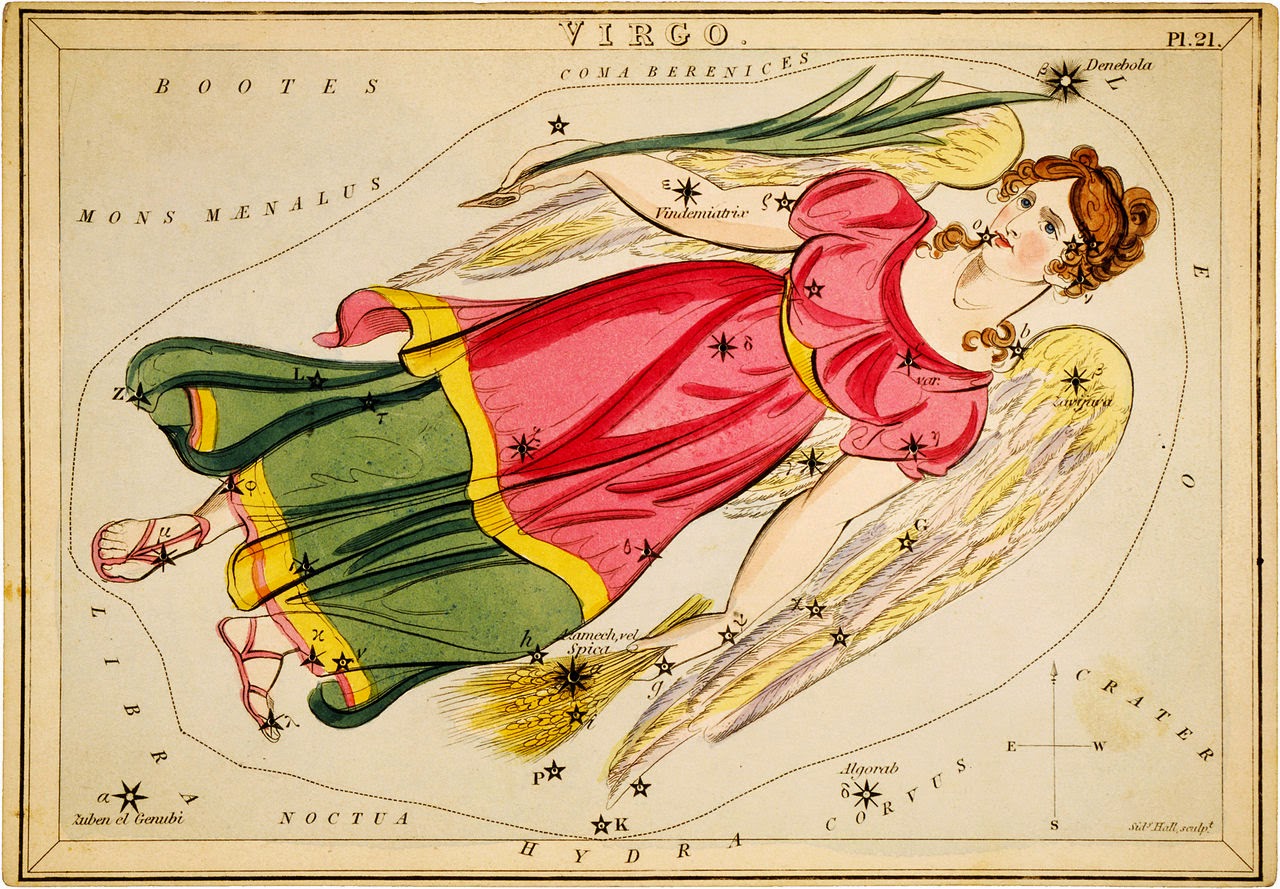 The sheaf of wheat is in her left (lower) hand, while a palm branch is here depicted in her right (upper) hand.

The sign of Virgo is associated with the point of autumnal equinox, which takes place each year around September 22 (it is autumnal in the northern hemisphere), at the very end of the house of Virgo during the Age of Aries. We have discussed in previous posts that the equinox points are points of crossing, where the sun crosses over from upper half of the zodiac wheel to the lower half, symbolizing the act of being "cast down" into matter, and where it again crosses back over this time from the lower half to the upper half, symbolizing a "rising again" into the heavenly realm. Virgo presided over the "crossing point" of being cast down into the lower realm (the fall equinox).

Below is an image of the zodiac wheel, with the two equinox crossings marked with a large "X." You can see that Virgo presides over the crossing-place on the right-hand side of this zodiac, which is the point of autumnal equinox and the point of "casting down" into matter: 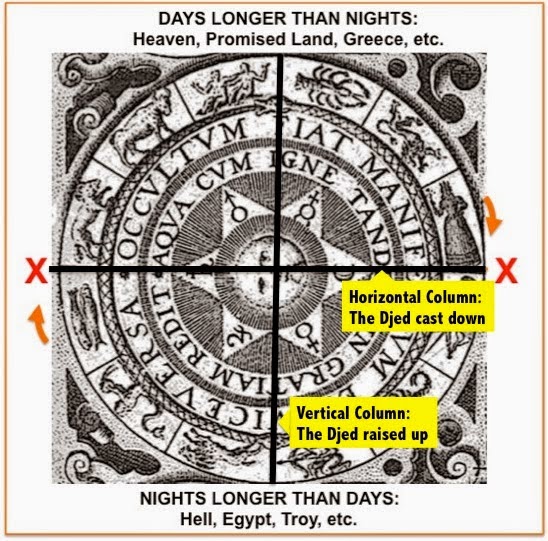 All of this strongly supports the conclusion that the "X"-shaped chiasm was intended to invoke this motion of casting down into matter, and subsequent raising back up into spirit. The fact that Virgo, who presides over the exact point of contact between these two realms (of matter and spirit), has long been associated with a sheaf of wheat (the grains of which themselves have a chiastic form) reinforces this conclusion yet further.

In light of all this, it is very interesting to go back and point out the depiction of Pythagoras in a posture which I would argue makes specific reference to the outline of Virgo, shown in an ancient coin referenced in Scott Onstott's amazing Secrets in Plain Sight video (which also explores the significance of goddesses), discussed in this previous post. If all of these references are pointing us towards the point of connection between the spirit world and the material world, perhaps the inclusion of Pythagoras in this metaphor is telling us that our journey down into matter and back up into spirit has much to do with number. If so, then Marty Leeds' discovery of the chiasm-shaped connection of letters to number would argue that this journey down and up also has much to do with language.

And so we see that all of these important symbols can be used to convey to us a profound message about our connection to the realm of spirit -- even in our current state of incarnation in miry matter, in which we have been "cast down" into bodies fashioned from the lower elements of earth and water.

All of them -- the chiasmus, the sign of Virgo, the infinitely mutable symbols of language and of number, and even the lowly but life-giving grain of wheat -- may somehow be reminding us that this material realm is but a chiastic reflection or projection of the invisible realm of spirit, and telling us that these two realms are deeply connected . . . and that the point of connection is always within our reach.