Why St. Peter was crucified upside-down 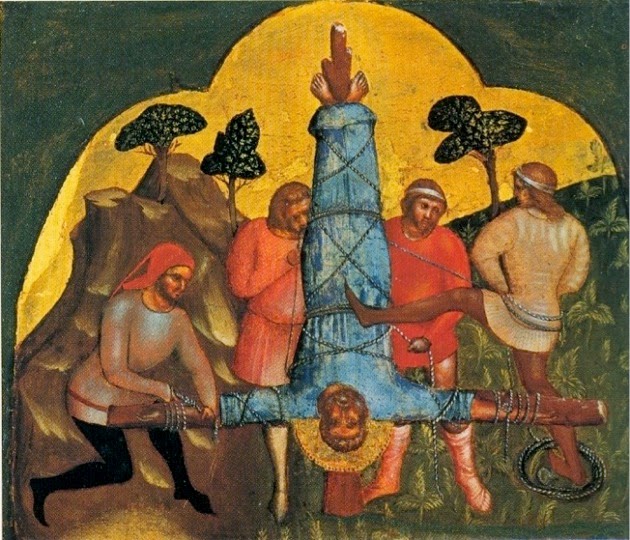 As asserted in previous posts, all these ancient sacred traditions and scriptures allegorize the motions of the celestial spheres -- the sun, moon, planets, and starry heavens.  This is as true of the scriptures which were selected for inclusion in what we call the Old and New Testaments as it is for the myths of the ancient Sumerians, ancient Egyptians, ancient Greeks, the Norse, the Celts, the Maya and Aztec and Inca and many other peoples of the Americas, the Hawaiians and Maori and other Polynesian islanders, Australia, ancient India, China, and other parts of Asia -- in fact, cultures across the planet.

How exactly such a system became so widespread across so vast a geographic dispersion and so vast a span of ages (from the most ancient civilizations at the dawn of recorded history to cultures which managed to maintain their traditional sacred wisdom right into the twentieth century) is a tremendous mystery, and one which completely confounds the conventional historical paradigm which the educational systems are dedicated to preserving.  Such a fact is so damaging to the conventional paradigm, in fact, that it is rarely if ever mentioned.

Beyond the question of how it happened is the question of what this universal system of allegory actually means -- what profound truths it was intended to convey.  It might also be phrased as the question of why the motions of the stars and planets would be considered so mightily important.  This question is explored more fully in The Undying Stars, and some aspects have been touched upon in previous blog posts, including:
and
To illustrate that the stories of the New Testament were not intended to be understood literally, one need only consider the example of the apostle Peter, the first among the apostles, the apostle who is given the keys to heaven, and who according to very ancient tradition was crucified like his savior, but insisted upon being crucified upside-down because he was not worthy of the same death as his lord.

The fact that there are twelve disciples (a number which recurs frequently in myth) should immediately alert us to the possibility that, instead of literal flesh-and-blood people, Peter, Andrew, James, John, and all the rest personify houses of the zodiac, and the characteristics of that part of the year in which the sun is rising in their particular sign (using the arrangement of the Age of Aries, for reasons outside the scope of this post but discussed in the book and by previous authors referenced in the book -- and covered as well in the excellent teaching videos of Santos Bonacci).

Using the same diagram shown in the previous post entitled "No hell below us . . ." (in which it was argued that the doctrine of a literal hell is yet another example of the misinterpretations which arise from a literal approach to the scriptures, and a harmful one at that), we can immediately see that Peter's portrait in the stories of the New Testament point to the strong possibility that he represents the sign of Aries itself, the leader of the twelve zodiac signs during the Age of Aries, and the sign which stands at the very "gates" of the upper half of the zodiac wheel: 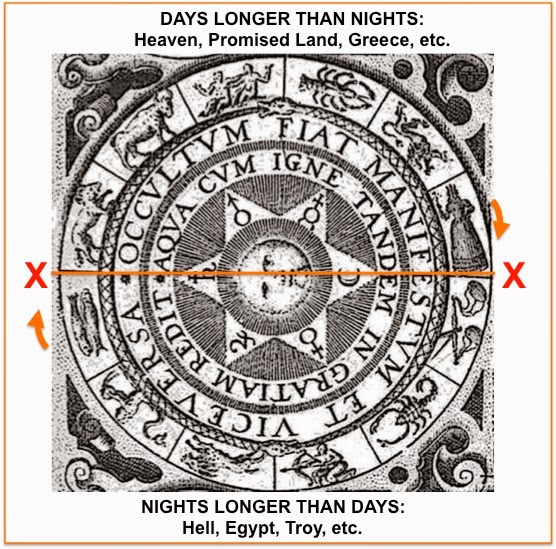 As explained in that previous post which opposed the literalist doctrine of hell, the horizontal line in this diagram indicates the line of the celestial equator, which the sun crosses twice per year in its annual ascent towards the "summit" of the summer solstice and then in its descent towards the "pit" of the winter solstice (for more explanation of what causes this, see for instance here, here and here).

Each of these "crossing points" are marked with a large red "X" in the above diagram: these are the two equinoxes.  The "X" on the left side of the diagram as you look at it, between the Fishes of Pisces and the Ram of Aries, is the spring equinox.  The gold arrows indicate the direction of the sun's travel through the signs in its annual circuit, and so you can see that the sun is heading up towards the summit of the year when it passes the spring equinox (left X in the diagram).  Conversely, the "X" on the right side of the diagram, between the Virgin of Virgo and the Scales of Libra, is the fall or autumnal equinox.  Here, the downward-arcing arrow indicates the path of the downward-arcing sun as it passes through the fall equinox and into the lower half of the year, all the way to the very "Pit" of the winter solstice (allegorized as the very Pit of Hell).

From this discussion, we can immediately perceive why Peter is depicted as the leader of the apostles -- he personifies the first sign of the new year, located first after the point of the spring equinox.  We also note that Peter is depicted in the gospel narratives as being somewhat "headstrong," as befits a personality who is allegorizing the Ram of Aries.  We can also see why Peter is depicted as being given the keys to the kingdom of heaven, for he stands at the very "gates" of the upper half of the year (the half in which days are longer than nights, and the half that stands for heaven if the lower half of the year stands for hell).

Peter maintains this position as guardian of the "pearly gates" in popular culture, such as in countless jokes, as well as in US Army "running cadences" in which various military characters are described as having "met Saint Peter at the Pearly Gates," where they are usually told to drop and knock out some push-ups!

As the discussion in The Undying Stars explores at greater length, the "crossing points" of the equinoxes are often allegorized in the ancient celestial metaphor system (of numerous mythologies and ancient cultures) as being places of sacrifice.  Some of this discussion can be found in the first three chapters of the book, available for preview online here.

In the New Testament, of course, these sacrifices at the equinoxes take the form of crucifixions.  The primary crucifixion of course is the crucifixion of Christ, which is surrounded by imagery consistent with the crossing in the autumn, when the sun and the year are sliding downwards towards the lower half of the year.  There is, however, evidence in the canonical scriptures themselves of another crucifixion at the spring equinox (after which Easter is celebrated) and it is surrounded by imagery consistent with spring and the signs of Pisces and Aries.

Further, there is strong evidence in early Christian tradition that Peter was crucified.  This tradition is apparently attested to by Origen of Alexandria, an early Christian but one who may well have taken a gnostic approach to the stories of the New Testament -- that is to say, strongly non-literalist.  Origen lived before the final triumph of the literalists and the purging of non-literalist scriptures and teachings (and probably of non-literalist teachers as well), and he was anathematized (condemned as a heretic) by later literalist theologians after his death.  He would certainly have understood the esoteric reasons why Peter, who represents a zodiac sign located at the sun's crossing of the celestial equator, would be appropriately depicted as having been crucified.

Further, according to ancient sources (including Origen), Peter insisted on being crucified "upside-down" -- inverted -- because he did not think it appropriate to be crucified in the same manner as the Lord.  Looking again at the diagram above, and understanding that the crucifixion of Christ is primarily surrounded with autumnal imagery (bread and wine, for instance) and described in the "Apostles' Creed" as being crucified and then descending into hell ("he was crucified, dead and buried; he descended into hell"), we can understand that the crucifixion of Peter was on the opposite side of the wheel from that of his lord.  From this fact, we can understand why Peter was depicted as being crucified upside-down: why he in fact insisted upon it, according to the ancient accounts.  In this way, the position of Peter as being located on the opposite side of the wheel is reinforced and graphically depicted.

All of these details were clearly intended to convey the message that these events are not to be understood literally, but rather are meant to be understood esoterically.  They are like the proverbial "finger, pointing a way to the moon" -- but tragically, we have been strictly instructed for seventeen hundred years to concentrate closely on the finger, and to ignore the glorious heavenly truths to which the finger is trying to point us.

Posted by David Warner Mathisen at 12:43 AM