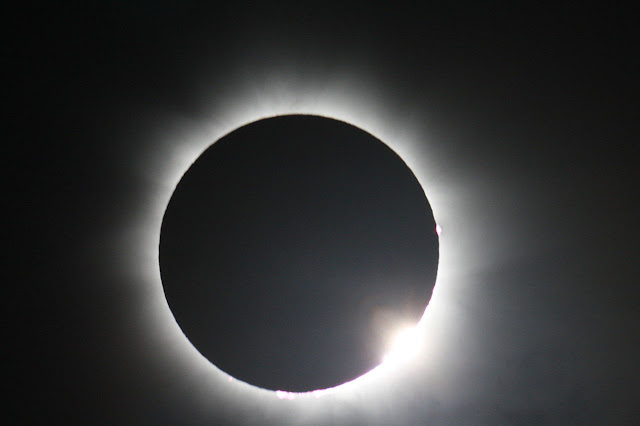 
If it is at all possible for you to do so, and if you are still wavering or "on the fence" regarding whether or not it is worth the effort to try to travel to the path of totality for the upcoming solar eclipse crossing the continent of North America from shore to shore this coming Monday, August 21st (at the moment of New Moon), below are some quotations from the landmark text Death of Gods in Ancient Egypt by Jane B. Sellers, to help you with your decision.

In Chapter 6 of that important book, entitled "Mighty is your Striking Power" (from Coffin Text 316, quoted on page 42 of the Revised 2007 edition of Death of Gods in Ancient Egypt), Jane Sellers writes:

The world fell silent, a marked chill abruptly arrived from nowhere and an otherworld twilight descended upon the sun watchers. The awesome show in the sky had arrived at its most dramatic moments.

A row of small beads suddenly appeared at the periphery of the dark shadow that had finally completed its encroachment of the golden disk of the sun. Just as suddenly, one giant bead obscured all others on the brow of the emerging corona and in all too few seconds it too was gone. On the threshold of victory for the dark shadow, the flash of the bead had come, and now the whole of the fiery corona flared into view.

A total eclipse is the most spectacular of all natural phenomena. It is difficult to impress this on those who have only witnessed those that are partial. Jay M. Pasachoff, director of Hopkins Observatory wrote:

"Many people say, 'I saw the eclipse. It was 99 percent total.' But 99 percent doesn't count . . . with eclipses it is all or nothing; the 99 percent people' don't know what they are missing. People who have seen a partial eclipse may be likened to those who have stood outside an opera house before opening night, watching the beautifully dressed people going in. All the preparations take place and the orchestra tunes up. But just as the opera is about to start, the partial eclipse viewer goes home. He may well be content with what he has seen, but in reality he has missed the entire show."

I experience the same feelings when friends tell of having seen a total eclipse but when questioned about the Diamond Ring Effects, or the corona, or viewing totality with the naked eye, these things 'they do not remember.' I know then that they too, have 'missed the whole show.' [33 - 34, all punctuation, italics and bold-typeface as in the original, except for the block quotation from Jay M. Pasachoff, which is indented further in the original  text, rather than set off by double quotes].

In Death of Gods in Ancient Egypt, the first edition of which was published in 1992, Jane B. Sellers put forward some extremely important analysis regarding specific myths of ancient Egypt and the general thesis of Hamlet's Mill and other related works as a whole. The entire text deserves to be read (and re-read), and indeed deserves a place on a physical shelf in your personal library, if possible. Some of the most important insights and arguments that she presents in her book include (among others):

In her book, Jane Sellers goes on to describe in detail and from personal experience the awesome effects of a total solar eclipse. Again, the full text is well worth reading -- and owning -- but a few selected descriptions may be helpful for those preparing to experience the upcoming solar eclipse on August 21 (or for those still trying to decide whether or not to make the trip, if it is at all possible to do so):

Totality can last from a few seconds to a maximum of seven and a half minutes. The very beginning is the 'first contact,' when the moon just begins to silhouette itself against the edge of the sun's disk. The period following is called the 'partial phase' during which more and more of the sun is covered by the moon. [ . . . ]

'Second contact' occurs from one to two hours after first contact, at the instant when the sun becomes completely hidden behind the moon. In the few minutes before this second contact (the beginning of totality) the sky noticeably darkens; some flowers close, and birds return to their nests. Because the diminished light that reaches the earth must come solely from the edge of the sun's disk, and consequently from the higher layers of the atmosphere, the sky and landscape take on strange colors. This eerie half glow is accompanied by a noticeable stillness and cooling of the air. [ . . .]

In the last instant before totality, the only parts of the sun that are visible are those that shine through the lower valleys in the moon's irregular profile and line up along the periphery of the advancing edge of the moon -- a phenomenon called Baily's Beads.

What follows can be viewed with the unprotected and unaided eye: it is a brilliant solitary flash, or ball of light, that astronomers have named the 'Diamond Ring Effect.' This is the last of Baily's Beads and it has always appeared infinitely larger to me than the beads that preceded it. The effect is one of a large and brilliant diamond, or stone, with the emerging corona being the ring itself.'
[ . . . ]

The whole of the magnificent corona next flashes into view. This is the sun's tenuous outer atmosphere and consists of sparse gases that extend from the apparent surface of the moon for millions of miles in all directions. The usual photograph of an eclipse is a corona shot. Amazingly, and especially if it is cloudless, the sky darkens and brighter stars and planets can be seen. It is indeed 'darkness at noon.'
[ . . . ]

The total phase ends with the second Diamond Ring flash as abruptly as it began. The magnificent flash has come twice, once going into totality and once coming out, always on opposite sides of the sun. I believe that these two flashes are of prime importance in understanding the story of the battle between Horus and Seth, a key myth in the religion of ancient Egypt.
[ . . . ]

Anyone who has witnessed totality will understand how difficult it is to convey the sense of wonder that this phenomenon engenders. After viewing totality on July 11, 1991, amateur astronomer Barry Slavin wrote 'I hardly know what I did. My carefully laid plans were in ruins. I could not take my eyes off that terrible wonderful thing there in the sky over our heads . . . It was every artist's conception of totality, but more brilliant, delicate, and finely etched than I could have ever imagined.' The editors of the magazine Sky and Telescope followed this quote with the comment:
'In truth, we see totality not with our eyes but with our souls.'
[ . . . ]

The ending of totality is called third contact, and here again, the eyes must be protected. Gradually the partial phases of the eclipse repeat themselves, but in reverse order. At last contact the moon has completely uncovered the sun. [34 - 39].

We should all be grateful to Jane Sellers for her evocative descriptions of the cycles in a total solar eclipse (only part of which I've quoted above), the best descriptions I've ever encountered, as well as for her groundbreaking analysis of the connections to ancient myth.

I truly hope that, if you are in any position to do so, you can experience the upcoming total eclipse -- and if not this one, then another one in the near future.

And as you do, you can contemplate the experience of those who were in position underneath the path of totality in other eclipses, many generations before our own, stretching back into the millennia, to eclipses thousands of years ago.

It is very clear, from an overwhelming amount of evidence -- in myths and in monuments -- that the ancient wisdom imparted to humanity in virtually every culture on our planet, on every inhabited continent and island on the globe, employs the awe-inspiring heavenly cycles to convey profound truths to our understanding, for our blessing and benefit.

And, as Jane Sellers demonstrates, among these heavenly cycles used by the ancient wisdom is (not surprisingly) the deeply moving experience of the total solar eclipse -- which Jane Sellers calls "the most spectacular of all natural phenomena."