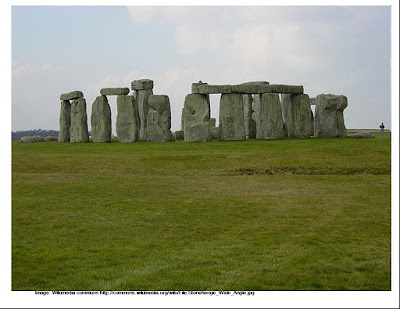 Besides being beautiful and awe-inspiring in its own right, and a testament to the technological and aesthetic achievements of ancient mankind, Stonehenge is also an incredibly important source of clues for unraveling the mystery of the timeline of ancient history.

Deer bones and other items from beneath the outermost earthen embankment which encircles the site have been dated to around 3100 BC. The entire site consists of concentric circles of embankments, post holes, and trilithons -- massive post-and-lintel arrangements of three stones arranged as two pillars with a lintel stone across the top. Inside the inner Sarsen circle is a horseshoe arrangement (not circular) of five massive trilithons composed of mighty blocks weighing up to fifty tons each.

The question of who built Stonehenge, how they did it, and why remains open for exploration. In his 1999 book, Ancient Celtic New Zealand, Martin Doutré argues that the angles and measurements of prominent details of Stonehenge indicate that the site actually contains a scale model of the Great Pyramid of Giza. 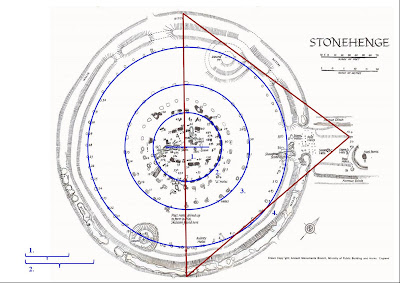 The diagram above (click for greater detail) presents a rough illustration of Mr. Doutré's theory. The concentric blue circles and the horizontal line indicate the positions of: 1. the inner trilithon horseshoe, 2. the Sarsen circle, 3. the Y-holes, and 4. the Aubrey circle. The red lines indicate the outline of the Great Pyramid based upon Doutré's discovery that the diameter of the outermost perimeter of the site measures 378 feet: exactly half of the 756 feet that each side of the Great Pyramid measures.

Based upon this, he discovered indications that the apex of a half-scale two-dimensional representation of the Great Pyramid rested in the avenue leading to the Heel Stone as indicated. His entire argument, which goes into much greater detail about this and many other important aspects of Stonehenge should really be read in its entirety in his book, Ancient Celtic New Zealand, which belongs in the library of everyone interested in the subject of our earth and mankind's ancient past upon our earth (which is everyone, right?).

This discovery is just one piece of evidence that the Great Pyramid might actually predate Stonehenge, and that Stonehenge might well have been built by the people who once occupied Egypt and left, or by their descendents.

It is also an indication of the advanced technological, mathematical, and astronomical advancement of very ancient mankind, as both the Great Pyramid and Stonehenge incorporate elements which indicate a sophisticated understanding of pi and phi and even (as many have noted before) knowledge of the size of the spherical earth itself.

The Great Pyramid is a model of the earth, on a scale of 1:43,200. The base perimeter of the Great Pyramid is 3,023.154 feet, which multiplied by 43,200 yields 130,600,523 feet -- a number that approximates within an error of 1% the circumfrence of the earth (as Robert Bauval and Graham Hancock demonstrate in Keeper of Genesis). Anyone wishing to argue that this is mere coincidence must contend with the fact that 43,200 is a clear precessional number, as explained in this previous post.

If Stonehenge is a one-half representation of the Great Pyramid, then it too is an accurate scale model of the earth.

For these and other reasons, Stonehenge is a critical source of clues to the truth about mankind's ancient past. In the Mathisen Corollary, I argue that the hydroplate theory of Dr. Walt Brown, which deals primarily with geological evidence of a catastrophic flood within human memory, provides an excellent explanation that fits the archaeological and mythological evidence of man's past as well.

He explains why precession (which is encoded by the number 43,200 at the Great Pyramid and at Stonehenge, as we have just seen) was caused by this ancient catastrophe, and even suggests: "Perhaps changes in earth's spin axis in the centuries after the flood motivated construction of ancient observatories such as Stonehenge" (7th edition of In the Beginning, page 117).

These connections are important to examine very closely.

Posted by David Warner Mathisen at 5:53 AM