A brief examination of the importance of chakras and singing praises 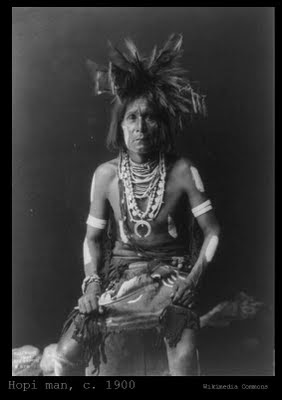 In the 1950s, Frank Waters (1902 - 1995) and Oswald White Bear Fredericks (1905 - 1990s) spent three years tape recording the sacred traditions of the Hopi people as told to them by twenty-seven Hopi elders, who had consented to preserving their wisdom in a form other than oral tradition for the very first time.

From the recordings, Mr. Waters and Mr. Fredericks created a manuscript, which the elders reviewed and approved (an important point, as there are some who allege that Mr. Waters treated the Hopi tradition in a freewheeling fashion and changed what he was told into what he wanted it to be, which is a baseless allegation). This text became the Book of the Hopi, published in 1963.

One of the most striking features of the Hopi creation story, as related to Mr. Waters, is the belief that we are currently living in the Fourth World, the previous three having been destroyed by fire, ice, and water, respectively. As is now widely known, the Maya also believed that we are living in the fourth age of the world, which they called the Fourth Sun, the previous Suns having been destroyed, as this one will inevitably be as well. It is quite fascinating to examine the reason given by the Hopi elders for the destruction of the previous three worlds.

In the Book of the Hopi, we learn that the Creator gave the people two clear commands at the beginning of each new age: "First, respect me and one another. And second, sing in harmony from the tops of the hills. When I do not hear you singing praises to your Creator I will know you have gone back to evil again" (16).

Clearly, singing to the Hopi was a matter of very great importance. Further, the elders revealed their understanding that when men and women were first created, they began to multiply and spread throughout the earth, but that "This did not matter, for they were so close together in spirit they could see and talk to each other from the center on top of the head. Because this door was still open, they felt close to Sóktunang and they sang joyful praises to the Creator, Taiowa" (15).

The living body of man and the living body of the earth were constructed in the same way. Through each ran an axis, man's axis being the backbone, the vertebral column, which controlled the equilibrium of his movements and his functions. Along this axis were several vibratory centers which echoed the primordial sound of life throughout the universe or sounded a warning if anything went wrong.

The first of these in man lay at the top of the head. Here, when he was born, was the soft spot, kópavi, the "open door" through which he received his life and communicated with his Creator. For with every breath the soft spot moved up and down with a gentle vibration that was communicated to the Creator. 9 - 10.

Other vibratory centers included those at the brain, the throat, the heart, and the navel. The Hopi tradition makes clear that the successive destruction of the first three worlds took place after the majority of men began to cease their singing of praise to the Creator and stopped communicating with him through their first center.

What is most remarkable is that these vibratory centers described by the Hopi elders correspond quite closely to the chakras described in ancient Hindu texts and persisting in Tibetan, Hindu and Buddhist beliefs to this day, a similarity which Frank Waters points out in a footnote to his manuscript (pages 10 and 11). While most eastern traditions hold that the chakras are seven in number (and ten in number in some Tibetan traditions), the corresponding location of the crown of the head, the forehead (or brain), the throat, the heart, and the navel in both the eastern and the Hopi traditions is quite fascinating. 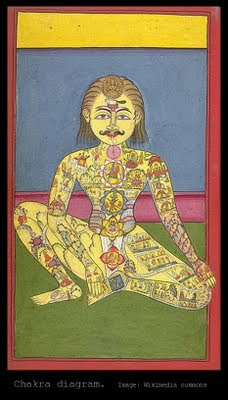 It is also fascinating that the Hopi described these important "doors" as vibratory, in light of the subjects touched upon in this previous discussion of the importance of wavelengths and energy as they relate to human beings through music and (as John Anthony West has described in his books on ancient Egypt) the proportions of architecture and art. We discussed the importance of this concept further in another more recent blog post here.

Finally, it is quite interesting that the Christian faith also places great importance on singing (as well as chanting, in some traditions, and singing without accompanying instruments in some traditions as well).

Even more intriguing is the command found in 1 Corinthians 11:4 which says:
"Every man praying or prophesying, having his head covered, dishonoureth his head."

The reasons for this strict admonition are worthwhile to contemplate.