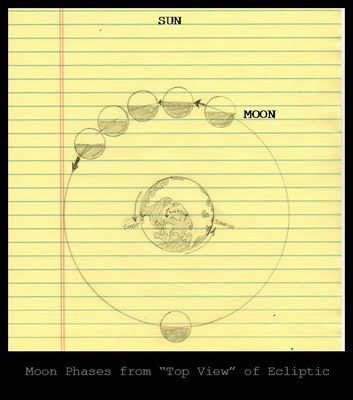 Almost a week ago, on June 30, we discussed Taurus and the Hyades, and the fact that the sun was rising in the constellation of Taurus, just as in the Polynesian legend of Maui catching the Sunbird in a net and beating it with a jawbone.

At that time, we linked to this diagram of the morning sky, which clearly shows the Hyades looking like a boomerang or a jawbone, but which also shows the crescent moon just ahead of the rising sun, but becoming thinner and thinner as it rises later and later, losing ground to the sun and appearing lower and lower above the horizon prior to sunrise. On July 1, the moon would "lose the race" and be overtaken by the sun. On that day, it would rise at the same time as the sun, in what is known as a "new moon" (which cannot generally be seen, because it rises with the sun and moves through the sky very close to the sun, and the dark side of it is turned towards the earth as an observer from earth looks towards it and the sun).

Now, nearly a week later, the moon has continued to rise later and later and it has now been overtaken by the sun, and so the moon is following the sun throughout the day (look at the diagram and see that the sun will be "revealed" to an observer on earth first, then the moon, as the earth turns in the direction indicated). The moon is now a thin crescent in the sky trailing behind the sun, and at sunset can be seen in the sky above where the sun has set, a thin crescent but getting thicker and thicker as it trails the sun more and more, and as it appears higher and higher in the sky at sunset (because it is trailing the sun by a greater and greater angle each day).

The direction of the moon's orbit around the earth is indicated by arrows as well, and it happens to orbit in the same direction that earth rotates. The point on the earth where sunrise is taking place is indicated by a label which reads "sunrise" -- it is the place where the rotation of the earth first begins to bring the observer to the point where he can see the sun begin to appear around the edge of the earth (of course, he would see the sky lighten considerably before the first edge of the sun began to come into view).

Similarly, the point on the earth where sunset is taking place is also indicated by a similar label, and the rotation of the earth is causing a similar phenomenon there, as it takes the observer to a point where the sun drops behind the edge of the earth "behind" the observer.

In each case, we can observe the moon in its orbit. Last week, in the days leading up to the new moon on July 1, the moon was at roughly the point on its orbit indicated by the first moon circle in the diagram above (the first circle meaning the first one on the right, since it is orbiting in a counter-clockwise direction, from right to left in the diagram above; the first circle we are discussing is the one labeled with the word "moon"). An observer on earth would see the moon before sunrise, and would only see a very thin sliver of the illuminated side of the moon -- the thin sliver on the sunward edge of the moon (the left edge). This was the "waning crescent" depicted in the diagram of the sunrise linked in the post on Taurus and the Hyades -- "waning" meaning that it was becoming thinner and thinner and growing less and less visible, on its way to disappearing completely in a new moon.

The new moon took place as the sun "passed up" the moon, and after the new moon the sun is ahead of the moon instead of being behind it (as it was in the diagram connected with Taurus and the Hyades). Now the sun leads the moon through the sky, and the moon is still in the sky after the sun goes down, as a thin crescent but one that is now lit on the right edge. The diagram above should make clear why it is the right edge of the moon that is now visible as a crescent, while in the waning moon it was the left edge. As the moon continues around earth, the side being lit by the sun shows more and more towards earth, so the crescent gets thicker and thicker -- it is a "waxing" crescent, which means it is growing larger and larger.

Eventually, the moon will get to the point of being opposite the earth from the sun -- at the bottom of the above diagram -- when it will be full because its illuminated side which is facing the sun will also be facing fully towards an observer upon the earth. It will of course be high in the sky at midnight then, and no longer close to either the sunrise or the sunset. Thus, we can conceptualize that the waxing crescent we see now will continue to wax thicker and thicker until it becomes a full moon, on July 15.

The great H.A. Rey, creator of the Curious George books and also the author of an outstanding book on the stars (discussed, among other places, in this previous post and this previous post), explained the moon's motion this way in The Stars: A New Way to See Them:

Like sun and stars, the moon rises east and sets west, as an effect of the earth's rotation from west to east. But the moon also revolves around the earth from west to east and this reduces the apparent effect of the earth's own rotation. The result is that the moon appears to wander across the sky perceptibly more slowly than sun and stars, and this makes its schedule rather erratic, at first glance. Every day, it rises about 50 minutes later, on the average, than the day before and sets accordingly later too. This daily retardation, as it is called, brings the moon out of step with the sun and then into step again over a period of a month or, more exactly, of 29 ½ days. 136.

To understand how the moon in the above diagram went from a waning crescent lit up on the left edge to a waxing crescent lit up on the right edge (all descriptions are assuming an observer in the northern hemisphere), imagine taking the diagram above in which the observer is above the north pole, and moving the observer downwards towards the plane of the ecliptic and on the other side of earth from the sun, so that he is now hovering a little above the plane of earth's orbit around the sun and looking at the earth towards the sun, as in the sketch below: 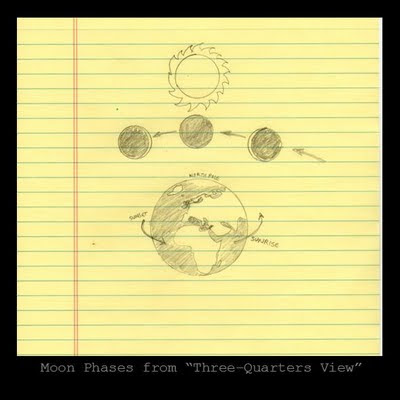 Again, we see the direction of earth's rotation is indicated by arrows, and the direction of the moon's orbit around earth is likewise indicated. The point of sunrise is indicated, at the edge towards which a stationary observer on earth will rotate until the sun begins to peek over the horizon, and the point of sunset is likewise indicated where the turning earth will leave the sun behind the observer as he rotates into night.

We can now see even more clearly why the moon was a thin crescent ahead of the sun in the days leading up to July 1 (when the moon was in the position indicated by the rightmost circle in the diagram above). It should be clear that the very right edge of the disc of the moon would be illuminated to an observer on earth.

After the moon passed through the position of new moon (the center moon in the above diagram, in which its illuminated face is pointed away from an observer on earth), the moon would now be seen following the sun during the day, with its right edge illuminated. At sunset, after the sun disappeared below the horizon, the moon would still be visible in the sky, a little above the disappearing sun, as a thin waxing crescent.

Each day, as the moon proceeds along its circle around the earth, it will be further behind the sun (and higher in the sky at sunset), and more of it will be illuminated, until it reaches the point of full moon (a previous post at a time close to full moon provides some other illustrations of the same principle we are examining here).

This discussion should help clarify the reason that the moon fills up from right to left (beginning with a thin crescent along the right edge and then filling up the right half until full). It then begins to darken from the right edge until only a crescent is left upon the left. You can perhaps remember this by thinking that the moon works opposite to modern writing -- it goes right to left instead of left to right (ancient writing, such as that of the Phoenicians and Hebrews, went right to left as well, as we have pointed out in this previous post).

In any event, be sure to enjoy the crescent moon just after sunset. Now you should be able to conceptualize exactly what is taking place in the celestial mechanics that is causing the beautiful sight.
Posted by David Warner Mathisen at 11:43 PM