The Lunar Nodes and the Nine-World Cosmology 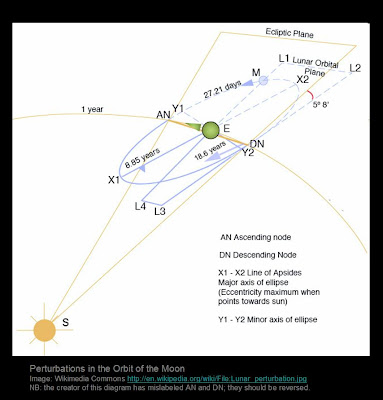 In the past few posts, we have been discussing some aspects of the orbits of the planets and phases of the moon (which are of course related to its orbit).

In our examination of the orbits of the planets, we noted that they move counterclockwise around the sun, just as the chariots moved around the ancient Roman circus, and that there were anciently thought to be seven planets or celestial powers, just as there were seven laps in the chariot races in the ancient Roman circus (these seven included Saturn, Jupiter, Mars, Venus, Mercury, and the sun and moon).

There are many places in mythology in which a journey through seven stages can be seen as a celestial journey past these seven celestial powers. One of them is the journey of Gilgamesh and Enkidu to the Cedar Forest, which is discussed in some detail in the Mathisen Corollary book. On that journey, the heroes must cross seven mountain ranges, guided by the constellations -- a clear indicator that their journey involves the realm of the heavens.

Also, the ancient Mesopotamian Cylinder Inscriptions (on "Cylinder A" and "Cylinder B," discovered in 1877 and probably dating to 2125 BC, both of which are now on display in the Louvre) describe the divine commission to Gudea to build a ziggurat named Eninnu, which had seven stacked square layers, probably representing the seven celestial worlds.

However, there is another tradition running through many ancient mythologies in which there are nine layered worlds as opposed to only seven. This tradition is very strong in ancient Hindu cosmology and astrology, but can also be found in Norse mythology, in which there were nine worlds all connected by Yggdrasil, the world-tree. Where did the other two celestial bodies come from?

Nine skies, instead of seven, within the sphere of fixed stars, result from the habit of including among the planets the (invisible) "head" and "tail" of the "Dragon," which is to say the lunar nodes, conjunctions or oppositions in the vicinity of which cause the eclipses of the Sun and Moon; the revolution of these "draconitic points" is c. 18 ½ years. 123.

In other words, the two lunar nodes, which are invisible, were important enough to be included among the celestial objects that had the greatest power in the heavens. What exactly are these powerful "nodes"?

The moon's orbit will actually pass through the plane of the ecliptic twice, once on its way "down" the moon's tilted orbit, and again on its way back "up" the tilted path: thus one node is known as the Descending Node (marked "DN" in the diagram above) and the other as the Ascending Node (marked "AN" in the diagram above). For some reason, the diagram above (from Wikipedia / Wikimedia) has the AN and DN mixed up -- the node marked AN should be the DN, and vice versa. This only serves to illustrate how unfamiliar we generally are with this concept today. Later in this post there is a link to a different diagram which has them labeled correctly.

Unless the nodes are aligned with the new moon and full moon, they will not cause an eclipse (in the diagram above, the moon will not be near AN or DN when it is at the new moon or full moon positions). However, as the earth continues around the sun, if the positions of AN and DN stay pointed in the direction that they are pointed in space as the earth goes around (much as the earth's axis stays pointed in the same direction as earth goes around its orbit), we can see that there will be two points on the earth's orbit at which a node is pointing right at the sun and the other node is pointing directly away -- meaning that as the moon goes around to its new moon and full moon positions it should create at least a partial eclipse (depending on its timing: if it happens to reach full moon or new moon exactly as the AN or the DN line up just right, it would create a total eclipse).

The positions of the lunar nodes AN and DN do not stay oriented the exact same way all the time, however. If they did, lunar eclipses would be much more regular and predictable. Instead, the plane of the moon's orbit slowly rotates around the earth, in a clockwise direction. Thus, if the tilted plane of the moon's orbit were an elliptical piece of glass, and if we were looking down at this scene from above earth's north pole, we could see the imaginary pane of glass slowly rotating in a clockwise direction, even as the moon that was moving around its outer edge kept orbiting in a counter-clockwise direction (and as the earth itself continued moving on its own orbital path around the sun in an counter-clockwise direction).

The two nodes, then, move in space as the plane of the moon's orbit makes its rotation, and they proceed in a clockwise circle (a light-blue arrow in the diagram above coming out of the point marked DN shows the direction that the nodes move around the earth; this arrow is marked by the time it takes the nodes to complete one full circle, which is about 18.6 years). The moon's plane and the nodes move about 19.3o to the west each year, so they take 18.65 years to complete a full circle of 360o .

The diagram above being somewhat complicated, it may help the reader to visit this page which describes the two nodes and which provides a somewhat clearer diagram. To depict the nodal motion, an arrow could be drawn from the ascending node in that diagram straight to the left, and from the descending node in the diagram straight to the right: this would depict the clockwise motion of the nodes.

As the passage cited from Hamlet's Mill above points out, these nodes are known as "draconitic points" and even today the amount of time it takes the moon to move from one node back to the same node is called a "draconic month" (at 27.2 days, it is slightly less than a "synodic month," which is the time it takes to move from one new moon to the next new moon, which is 29.5 days as discussed in this previous post).

In ancient mythology, these nodes were depicted as the head and tail of a dragon, or as a knotted serpent or dragon (the knots representing the nodes, as argued by Willy Hartner in his definitive essay on the subject, "The Pseudoplanetary Nodes of the Moon's Orbit in Hindu and Islamic Iconographies," published in 1938). Sometimes the nodes were depicted as a devouring demon with canine or leonine facial features and no lower jaw, such as in the demon known as Rahu in ancient Hindu mythology. A good discussion of the subject and its depiction in art can be found here on the website of the Circle of Ancient Iranian Studies (CAIS).

It is common to read modern treatises on these dragons or demons explaining that the "primitive ancients" actually believed that a dragon or demon was swallowing the moon or the sun during an eclipse, but as we have argued before, it is far more likely that these mythological depictions were simply the metaphorical manner in which actual knowledge which we would today call scientific was preserved and transmitted (see here and here).

Further, the very fact that these nodes were sometimes numbered with the other seven celestial spheres indicates that their motions were studied and known. As with the other planets, the "pseudoplanets" of the nodes were tracked across the background of the stars by the ancients. They knew their 18.6-year cycles, just as they knew the orbital cycles of the other planets such as Saturn and Jupiter (Hamlet's Mill describes on page 129 how many ancient cultures, including the ancient Egyptians and the ancient Persians, celebrated a sort of "jubilee" celebration upon the thirtieth year of a king's reign: thirty years is the orbital period of Saturn).

It should also be pointed out that the mythological encapsulation of the lunar nodes as the knots of intertwining dragons, or as disembodied devouring heads, may be a better way of transmitting the understanding of these nodes than would be an attempt to pass along a diagram such as the one at the top of this post.

For some further illustration of these nodes, which are instrumental in eclipses and which were so important to the ancients that they ranked as celestial powers in the sky along with Saturn, Jupiter, Mars, Venus, Mercury, and the sun and the moon, see also the two videos embedded below. Unfortunately, these videos do not depict the motion of the nodes themselves as they make their clockwise path around the earth, but they may be helpful in visualizing the concept for those who prefer to see it in video form: