STAR MYTHS of the WORLD

The Unfinished Obelisk at Aswan 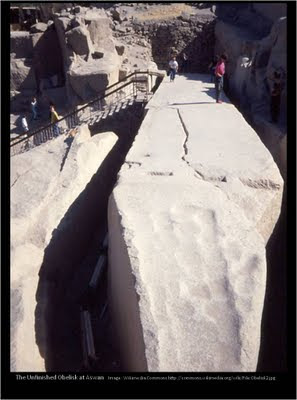 Here is an image of the famous Unfinished Obelisk, lying in the Aswan Quarry in Egypt.

It is the largest ancient obelisk we known of in the world, and would have been about 137 feet when finished (by way of comparison, the Statue of Liberty from base to the top of the torch is 151 feet, not counting the brick pedestal).

The entire obelisk would have been a single piece, and would have weighed nearly 1,200 tons. This is almost unbelievably massive for a single block of stone intended to be moved around and stood upright.

The three enormous stones known as the "trilithon" in the base of the Temple of Jupiter at Baalbek are three of the largest stones ever incorporated into a building, and each of them weighs about 800 tons. Two stones near that temple but not incorporated into it for some reason (the so-called "Stone of the Pregnant Woman" and one other) weigh over 1,000 tons each, with the "other" stone being judged to be just over 1,200 tons as well. These are among the largest known single blocks ever quarried.

How anyone would move stones of such tremendous mass remains a mystery. Even moving such stones today with modern equipment would pose a complex engineering challenge. In their book, Keeper of Genesis: A Quest for the Hidden Legacy of Mankind, Robert Bauval and Graham Hancock provide some perspective on the difficulty of moving such stones. Speaking of the massive stones in the megalithic Valley Temple and Sphinx Temple at Giza*, which weigh around 200 tons each the authors write:

Such loads simply cannot be hoisted by the typical tower and hydraulic cranes that we are familiar with from building sites in our cities. These cranes, which are pieces of advanced technology, can generally 'pick' a maximum load of 20 tons at what is called 'minimum span' -- i.e. at the closest distance to the tower along the 'boom' or 'arm' of the crane. The longer the span the smaller the load and at 'maximum span' the limit is around 5 tons.

Loads exceeding 50 tons require special cranes. Furthermore, there are few cranes in the world today that would be capable of picking 200-ton blocks of quarried limestone. Such cranes would normally have to be of the 'bridge' or 'gantry' type, often seen in factories and at major industrial ports where they are used to move large pieces of equipment and machinery such as bulldozers, military tanks, or steel shipping containers. Built with structural steel members and powered with massive electric motors, the majority of these cranes have a load limit of under 100 tons. In short, a commission to put together a temple out of 200-ton blocks would be a most unusual and very taxing job, even for modern heavy-load and crane specialists. 28.

Modern academia is generally united around the consensus that the Unfinished Obelisk was discarded when a crack was found (or developed) in the obelisk. In a recent interview on Red Ice Radio from June 12 of this year, Christopher Dunn, author of the Giza Power Plant and Lost Technologies of Ancient Egypt, observes that this explanation poses some logical problems. Beginning at about the 47:50 minute mark in the second hour of the interview, he notes that at least some of the worked stone could certainly have been salvaged, either for a smaller obelisk or for other construction purposes.

He notes that the builders had already dug channels eleven feet deep all the way around the stone, and created edges and faces, all of which represented an enormous cost of labor that could have been at least partly recuperated. Dropping all of that on account of a single crack seems a laughable theory. He suggests that the abandonment of the entire obelisk suggests something more ominous, although exactly what happened to cause its abandonment is still open to investigation.

Christopher Dunn: Along with the Unfinished Obelisk, and then at Abu Rawash near Giza where you have an unfinished pyramid, and you have unfinished blocks of granite that are stored near this unfinished pyramid at Abu Rawash, it seems to me that work was proceeding, but then it came to a sudden halt, and the work was abandoned, but not because --
Interviewer Henrik Palmgren: the shift was over?
Christopher Dunn: Yes. Something else happened. Exactly. But as far as that obelisk goes, the conventional theory of the obelisk being crafted by workers in the trenches beating the rock with dolorite pounders -- everybody I know, engineers particularly, who travel to Egypt and go to the Unfinished Obelisk, they don't consider that theory for very long.

The Unfinished Obelisk strongly resembles another famous unfinished work, the massive unfinished moai in the Raro Ranaku quarry on Easter Island (Rapa Nui). An image of that moai taken around 1921 can be seen on the web here.

Like the Unfinished Obelisk at Aswan, this moai would have been the largest we know of on the island. Also like the Unfinished Obelisk, its abandonment suggests an interruption, possibly of a violent nature. In the case of the moai of Easter Island, hand tools were found near the site (as they were at Aswan in fact), and there are many other moai that were apparently abandoned prior to their final intended destination.

We have previously discussed the evidence that the moai-builders were slaughtered in a violent massacre by invaders from another island, possibly in conjunction with a different tribe or class of people who were already on the island with them. Is it possible that such a violent struggle between different groups took place in Egypt's ancient past as well?

If so, it is yet another clue that one of the most dangerous threats to civilization and human achievement is the instigation of grievances between groups, tribes, or classes -- the attitude that people of another tribe or type have fewer rights, or even that they do not have the right to live at all. There are those who can be seen stoking such attitudes even today, promoting the grievances suffered by one group at the hands of another group, and fostering resentment and hatred over these grievances.

As we approach the celebration of the Declaration of Independence in the United States, when in 1776 the signers pledged their sacred honor and their lives to defend the idea the all men are created equal -- as individuals -- and that they are endowed by their Creator with certain inalienable rights -- not rights that are bestowed by a government, or by virtue of membership in one privileged class or tribe or group versus another group or tribe -- we should consider these things, and consider the possibility that the opposite view, which can still be seen gnawing at the foundation of civilization today, may have been responsible for the overthrow of advanced civilizations in the past.

* In this post on his Message Board portion of his website, Graham Hancock notes that the blocks in the Valley Temple approach 100 tons but do not exceed 100 tons. He notes, however, that blocks in the Mortuary Temple attributed to Menkaure at Giza do reach 200 tons (and perhaps 220 tons).
Posted by David Warner Mathisen at 3:00 PM