Comet Garradd in Sagitta and the Coathanger 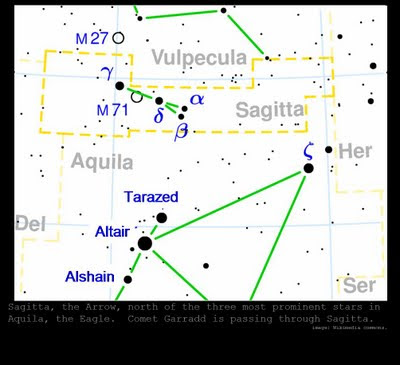 A comet designated C/2009 P1 Garradd (aka "Comet Garradd") has been making its way through the solar system and is now crossing through some fairly easily-identifiable territory in the band of the Milky Way galaxy.

As this description of Comet Garradd explains, the comet's path makes a fairly wide pass around the sun, and will not get closer than about 1.55 AU (astronomical units, a measurement equal to the mean distance of the earth from the sun). This means that it will remain pretty far away from earth and be difficult to see with the naked eye even at its brightest (which will be in March 2012). The orbit of Mars averages 1.52 AU, which means that Garradd's path swings it around the sun such that even in its closest approach it is only about the distance of Mars to the sun and no closer.

Currently, Garradd cannot be seen with the naked eye, but it is passing near some constellations and asterisms this week that allow observers to track it down using a telescope or binoculars.

To find Garradd at all, you will need a dark night, away from light pollution. The waxing crescent moon is still very young and following close behind the sun, which just "passed it up" over the weekend, creating a new moon (to see how the waning crescent moon is just ahead of the sun before it is overtaken and swallowed up in the sun's glare to form a new moon, and then emerges on the other side as a waxing crescent trailing the sun, see this previous post).

Because it is so close behind the sun right now, it is far in the west at sunset and exits the scene as night falls, leaving a nice dark sky for stargazing and comet-tracking. However, as it trails further and further behind the sun, it will be higher and higher in the sky later and later into the night after sunset, and as it does so it will also get thicker and thicker, on its way to a full moon on 12 September. Therefore, the next few nights might be good opportunities to look for Comet Garradd.

To get yourself oriented to the right portion of the sky, you will first want to find the constellation Aquila, or the Eagle. If you are using binoculars (which have some definite advantages for stargazing, as explained in this previous post), you will probably do best to actually lie down on the ground looking up, so that you can relax your neck and hold the binos steady. You will also want to remove your glasses if you wear glasses, and use the focus dial to bring the stars into focus with the binoculars instead of with your glasses. Doing so will allow you to get the eyepieces right up to your eyes the way they were intended to work, rather than keeping them a distance away because of your glasses.

To find Aquila if you are not familiar with this constellation, the best place to go is to the marvellous and practical book by H.A. Rey which we have discussed in several previous posts. However, if you want to track it down without his help, you should first find the southernmost beginning of the track of the Milky Way, which rises like the smoke from a campfire between the tail of the Scorpion and the jewel-like stars of the Archer, Sagittarius and then arcs right across the vault of the heavens.

In the Milky Way, two beautiful bird constellations are flying towards one another -- Aquila the Eagle (which you will encounter first on your way up the Milky Way from the Scorpion) and Cygnus the Swan (which is flying towards Aquila from north to south and is quite distinctive with its cross-shaped pattern and very symmetrical triangle wings).

Aquila is pretty easy to identify by its three stars in a row with bright Altair in the center (see the diagram above). Altair in the Eagle and Deneb in the Swan form two corners of the bright Summer Triangle, along with Vega (which, at a declination of +38°, is nearly straight up for observers in much of the US in latitudes close to N 38°). If you remove your binoculars while lying on the ground and look straight up and begin to squint (so that the fainter stars are all squeezed from view) you should be left with the three bright stars of the Summer Triangle being visible through your squinting eyes: Vega, Deneb, and Altair.

The three stars in a row that are the most distinctive feature of Altair reminded the ancient and medieval Arab astronomers of a balance on a scale, and they gave all three the Persian name Tarazed, or "the beam of the scale," as explained in this informative website written by Professor Jim Kaler, Professor Emeritus of Astronomy of the University of Illinois. Over time, this name became affixed to the second-brightest of the three (the upper one for viewers in the northern hemisphere), and the lowest of the three became known as Alshain. The center of the three and by far the brightest of them is, of course, Altair itself.

Using your binoculars or telescope, find the (now enormous) landmark of the three stars of the "beam of the scale" in Aquila, and continue up (north) to locate the constellation of Sagitta, or the Arrow (see diagram above). It consists of stars in a narrow "Y-shape" and a line from the three prominent stars in Aquila will take you right to its "fletching" in the tail of the arrow (the forked part of the "Y"). For a really excellent zoomed-in photograph of Sagitta, along with the three most distinctive stars of Aquila, and two tiny circles marking the comet as it passed by the M71 star cluster in Sagitta, check out this link, and then you can click on the photo one more time to zoom in even further.

To find the Coathanger, use your binos to draw a mental line between the two stars in Sagitta's Y-shaped tail and follow this line upwards (perpendicular to the line that forms the body of the Arrow itself) until you hit a single star, and take a right (for viewers in the northern hemisphere). You will come across the Coathanger -- it's really quite distinctive and unmistakable with binoculars. The comet is now heading for the Coathanger and will pass through it over the next few days (and nights).

To see what the Coathanger looks like, and the star where you "hang a right" to get to the Coathanger from a line going upwards from the tail of the arrow, look at this fantastic map of the area, which also depicts Garradd's progress through the sky in the coming weeks and months. Note that in that map (or, more properly, that chart), the positions of Comet Garradd are given for UTC hour 0 -- midnight in Greenwich, England. Therefore, the chart explains that observers far to the west of Greenwich (such as those in the US or in the Pacific even further west) should subtract a day from those numbers.

Note that this comet will continue to track across our night sky for the next several months, becoming brighter as March 5, 2012 approaches, when earth will come closest to Comet Garradd and observers should be able to make it out with the naked eye (although binos will probably still be preferable). At that time it will have made its way all the way north to the vicinity of the Little Dipper. According to the authors of the previously-linked article from Sky & Telescope, "Not since Hale-Bopp has any comet remained so bright for so long."

Comet Garradd was only discovered two years ago, in August of 2009, by astronomer Gordon J. Garradd, working from Australia's Siding Spring Observatory, in Coonabarabran, New South Wales (west and north of Sydney).

For a discussion of the properties of comets which appear to support the hydroplate theory of Dr. Walt Brown (and which conventional theories have a very difficult time explaining), see this previous post and especially this previous post.

Best wishes in finding Comet Garradd between Sagitta and the Coathanger!
Posted by David Warner Mathisen at 10:53 PM