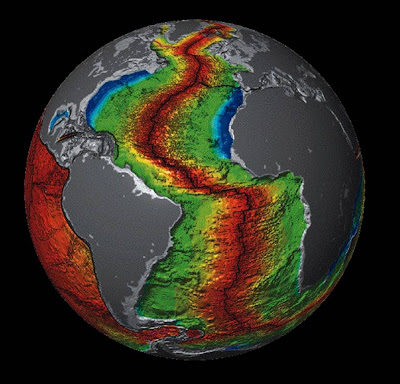 The connection between geology and the ancient history of mankind cannot be overlooked.

The currently-dominant theory of plate tectonics was ridiculed for decades when first proposed by scientists such as Alfred Wegener (1880 - 1930) in the early 1900s. Now it is so widely accepted that academic professionals who question it jeopardize their careers.

But plate tectonics is wrong. It may have been an improvement over previous theories, and it clearly seems to explain many phenomena on earth, but other phenomena -- some not even natural phenomena -- clearly illuminate its fatal flaws.

Ancient monuments such as Stonehenge, the Great Pyramid, the Caracol at Chichen Itza, the megalithic passages at Newgrange, Knowth, and Dowth, the megalithic temples of Malta such as Hagar Qim and Mnajdra, and many others around the world contain precise alignments with true north, with the rays of sunrise on the solstices, equinoxes, and cross-quarter days, and with the transit points of certain important stars.

Many of these monuments are many thousands of years old (Stonehenge and the megalithic temples of Malta are dated by conventional historians to 3000 BC and earlier, and the Great Pyramid is dated by conventional historians to a period around 2580 BC). If the theory of plate tectonics is correct, in which we are told that the continental plates are in constant gradual motion, drifting by several millimeters to as much as an inch a year, then why are all these monuments still so precisely aligned after thousands of years of drift?

It is AD 2011 as this is published, which makes the temples of Malta and Stonehenge well over 5,000 years old, and the Great Pyramid around 4,590 years old according to conventional dating (it may well be much older). Even at half an inch a year, 5,000 years of movement would equate to over four hundred feet.

If one or two of these sites happened to be on a particularly stable part of the globe (if such a place can be imagined in the theory of plate tectonics), that excuse can hardly be used for every single ancient and astronomically-aligned site on several different continents.

The continuing precise alignment of ancient man-made sites is not the only piece of evidence that demonstrates the grave errors with the tectonic theory, but it seems to be a particularly damning one. Because the connection between ancient history and geology is rarely made and often overlooked, this obvious problem with tectonics goes unnoticed.

There is, however, a geologic theory that has no difficulty with the ancient sites described above, and yet can also decipher many of the geological puzzles that plate tectonics was created to resolve.

According to the hydroplate theory, the Mid-Altlantic Ridge and the continental shelves (clearly seen in the above image from the US National Oceanic and Atmospheric Administration) were formed by the violent escape of massive flows of water. The jetting water eroded tons of material (which later spread across the earth and was sorted into the sediments we see today in many geologic sites such as the Grand Canyon). As weight was removed due to this jetting action of water escaping, the underlying crust sprang upwards, causing the plates carrying the continents to begin sliding away from this ridge towards the Pacific basin.

The Pacific basin itself was formed as an opposite reaction to the upward springing action of the Atlantic floor. These sliding plates eventually ground to a stop, creating buckling that formed the mountain ranges we see today. The intense friction particularly along the leading edge of these formerly sliding plates created magma and volcanic activity, which was more pronounced in the past but continues to this day.

According to Dr. Brown's theory, earthquakes are not the result of drifting plates but of continuing settling and shifting of these plates, just as heavy boxes in the back of a truck will occasionally shift and find a position of lower potential energy (Dr. Brown explains all of these phenomena in much greater detail, particularly earthquakes, which fall into different categories based on different causes, all of them understandable using the hydroplate model).

Not only does this theory explain literally hundreds of geological phenomena around the world more satisfactorily than competing theories such as tectonics (many of which Dr. Brown details in his book), but it also creates a paradigm shift in our understanding of the clues from mankind's ancient past. The hydroplate theory can unlock some of the mysteries of ancient archaeology and mythology.

The Mathisen Corollary applies Dr. Brown's theory to the human evidence of an ancient civilization that possessed a deep understanding of precession and encoded that understanding in their myths and archaeological monuments.

Anyone who is interested in unraveling the mystery of mankind's ancient past should carefully consider the hydroplate theory of Dr. Walt Brown.

Posted by David Warner Mathisen at 11:34 AM