The ideology of materialism 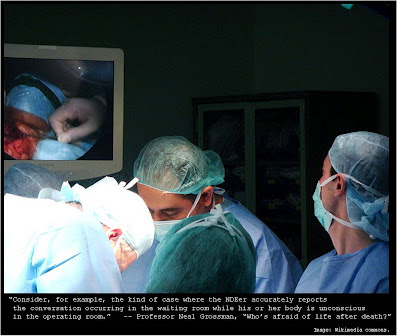 Materialism is an extremely pervasive philosophy which asserts that nothing exists beyond the material universe, which is composed of matter and energy (with matter and energy, of course, related as described by the work of Albert Einstein, who was not necessarily a materialist).

The tenets of materialism flatly deny the existence of the supernatural, as well as the possibility that consciousness can exist separately from its material source (materialists assert that consciousness in humans and in anything else possessing consciousness is the product of electrochemical or other physical products of a material organ such as the brain).  Non-physical beings (such as angels, perhaps) are impossible in such a philosophy, as is life after death.

In two essays available on the internet, philosophy professor Dr. Neal Grossman argues (citing an assertion by philosopher Robert Almeder) that not only does the overwhelming scientific evidence support the possibility that a rational person could reject materialism, but that the overwhelming scientific evidence supports the assertion that it is irrational to continue to accept materialism.

In the essays (entitled "Who's afraid of life after death?" part one and part two), Professor Grossman presents compelling evidence that consciousness can exist separately from the material organs that materialists would argue are the engines of consciousness.  He cites, for example, the case of a patient described in cardiologist Dr. Michael Sabom's Light and Death:

In this case, the patient had her NDE while her body temperature was lowered to 60 degrees, and all the blood was drained from her body. “Her electroencephalogram was silent, her brain-stem response was absent, and no blood flowed through her brain.” A brain in this state cannot create any kind of experience. Yet the patient reported a profound NDE.

Those materialists who believe that consciousness is secreted by the brain, or that the brain is necessary for conscious experience to exist, cannot possibly explain, in their own terms, cases such as this one. An impartial observer would have to conclude that not all experience is produced by the brain, and that therefore the falsity of materialism has been empirically demonstrated. Thus, what needs to be explained is the abysmal failure of the academic establishment to examine this evidence and to embrace the conclusion: Materialism is false, and consciousness can and does exist independently of the body.

Professor Grossman has also written the foreword to Chris Carter's Science and the Near-Death Experience: How Consciousness Survives Death, which delves into this issue in great detail and examines many other pieces of evidence suggesting that the core materialist denial of consciousness apart from physical causes cannot be correct.  This book is the sequel to Mr. Carter's excellent Science and Psychic Phenomena, which was discussed in this previous post.

Several other previous posts also present evidence and discussion that is relevant to the question of whether one can honestly continue to maintain a strict materialism in the face of the evidence, such as "Moving report of elephants mourning the passing of 'Elephant Whisperer' Lawrence Anthony," "Titanic, premonitions, and the nature of consciousness," "A heartfelt portrait of John Blofeld, from Daniel P. Reid," "Don't miss the intriguing interview with Sheldon Norberg on New Dimensions Radio," "Scary ghost story (West Point)" and  "Rupert Sheldrake and Morphic Resonance."

Aside from its tremendous importance to our day-to-day lives, and its inherent interest, what does this subject have to do with the topic of ancient civilizations and theories that contradict the conventional academic historical narrative?  Quite a lot.

First, of course, much of what the ancient civilizations were about seems to involve consciousness and the survival of the soul after death.

Beyond that connection, however, is the fact that the "conventional academic historical narrative" is firmly founded upon a strict materialist paradigm, one that is currently dependent upon the Darwinian theory of origins to explain the existence of humans at all, and therefore one which paints a picture of human history that involves slow and gradual progress from primitive towards greater and greater levels of sophistication and technological advancement.  Theories which demonstrate that the further back we go the greater sophistication and technological advancement we seem to find present a profound challenge to this materialist paradigm and are generally rejected out-of-hand.

Professor Grossman's article (and his introduction to Chris Carter's book) demonstrate that proponents of materialism vehemently reject any evidence that suggests consciousness can exist independently of physicality.  He notes that there is a category of belief in materialism in which "materialism as an ideology, or paradigm, about how things 'must' be, which is impervious to evidence (this is the hallmark of an unscientific hypothesis—that evidence is not relevant for its truth)."

The implications of materialism are thus quite profound.  We swim in an ocean that is so heavily informed by materialist assumptions that we do not often even think about them, let alone recognize their impact on our lives.  Articles such as those linked above by Professor Grossman, and books such as those by Chris Carter, are an extremely important reminder that we should be extremely suspicious of this pervasive ideology.
Posted by David Warner Mathisen at 4:15 PM