Titanic, premonitions, and the nature of consciousness On this day one hundred years ago -- April 10, 1912 -- the RMS Titanic loaded the majority of her passengers and crew at Southampton, England, and departed on her maiden voyage.

Sailing from Southampton at 12 noon on Wednesday the 10th, the ship would then dock at Cherbourg, France (arriving four hours later that same Wednesday) where more passengers would board, and then left Cherbourg that evening for Cork Harbour in southern Ireland, arriving late in the morning of Thursday the 11th. There, some passengers who were only going as far as Queenstown (as the city was renamed in 1850 following a visit from Queen Victoria) departed the ship, about 130 other passengers and crew members boarded, and the ship departed on its ill-fated crossing of the Atlantic Ocean.

As Titanic steamed out of Southampton on the 10th, an incident that at least one spectator found extremely ominous took place. As described in the outstanding 1998 book Unsinkable: The Full Story of RMS Titanic by Daniel Allen Butler:


The immense bulk of the liner displaced an incredible volume of water in the narrow channel, creating a powerful suction in her wake. As she approached the entrance to the channel, the Titanic drew abreast of the small American liner New York, which was moored side by side to the White Star's Oceanic. Both ships had been immobilized by the coal strike, and neither had steam up. As the Titanic passed, the suction of her wake drew the two smaller vessels away from the dock where they were tied up. The strain on the six lines mooring the New York to the Oceanic grew too great, and with a series of loud cracks they parted in rapid succession as the New York was pulled helplessly toward the Titanic. For a moment a nasty collision seemed inevitable as the stern of the New York swung to within three or four feet of the bigger liner's hull. Quick thinking on the part of Captain Gale of the tug Vulcan and prompt action on the Titanic's bridge by Captain Smith averted an accident. 41.

Mr. Butler recounts that one passenger, Renee Harris, the wife of an American theater producer, "suddenly found a stranger standing at her side, asking, 'Do you love life?'" When she answered in the affirmative, he told her, "That was a bad omen. Get off this ship at Cherbourg, if we get that far. That's what I'm going to do." According to Mrs. Harris, she laughed it off at the time, "but later she would recall that she never saw the man on board again" (Butler 42).

This was by no means the only such premonition of disaster recorded prior to the voyage of the doomed liner. While skeptics might dismiss this recollection of Mrs. Harris as something that only took on significance after the disaster, there are examples of foreboding letters that were posted to relatives prior to the ship's sailing which are more difficult to explain away.

For example, Major Archibald Butt, military aide to President William Howard Taft and also a personal friend of Theodore Roosevelt, wrote a last letter to his sister-in-law before the Titanic sailed, in which he said: "If the old ship goes down, you'll find my affairs in shipshape condition" (Butler 31).

There is also the letter sent by Chief Officer Wilde (the second-in-command of the ship after Captain E. J. Smith) to his sister which was posted at Queenstown, which said: "I still don't like this ship . . . I have a queer feeling about it" (Butler 52).

Even more remarkable is the story of a young fireman (one of the over three hundred crew members assigned to stoke or otherwise tend to the mighty engines of the ship) named John Coffey, who was seized by a sense of foreboding and hid aboard one of the tenders that pulled away from Titanic with the last sacks of mail in order to skip out on the voyage (reported in several sources including Butler 51, although some have argued that this story might be fabricated, saying his name was not listed on the ship's rosters, although it is a fact that many crew particularly those shoveling coal were not permanent White Star Lines employees but were hired by recruiters who went out looked for workers for the voyage only days beforehand, and it is also a fact that several passengers and crew for reasons of their own decided to list themselves under fictitious names).

Another remarkable story that appears to indicate accurate premonitions comes from a family traveling in Second Class, Benjamin and Esther Hart, along with their seven-year-old daughter Eva. Apparently, Mrs. Hart was besieged by a sense of impending disaster and was certain that it would strike at night, so she stayed up each night reading or knitting, and slept during the day (Butler 56).

Do these premonitions of impending catastrophe indicate that the human mind is perhaps in possession of senses beyond what can possibly described as strictly "natural" (in the sense of the natural or material world)? What physical forces in the strictly materialistic world of atoms and molecules can possibly explain the perception of an impending collision with an iceberg that still lay thousands of miles away, separated by the breadth of the vast Atlantic?

If we think about these reports from Titanic (and there are other documented instances of similar premonitions surrounding other disasters), and if we entertain at all the possibility that not all of them were simple "coincidence," then it leads to all kinds of questions about the nature of our consciousness. Is it possible that our consciousness is not simply a physical product of chemical and electrical activity in the cells of an organ we call the brain? If our consciousness is simply a byproduct of a jumble of electrical and chemical impulses emitted by a physical mass of nerves and brain cells, then how does one explain all of the premonitions described above surrounding the maiden voyage of Titanic?

This historical evidence would seem to be additional evidence to other evidence we have examined previously (see here and here, for instance) that consciousness is somehow greater than the physical matter that supposedly generates it (in the eyes of the strict materialist).

Perhaps, as some have speculated -- including American philosopher William James (1842 - 1910) and brother of Henry James (1843 - 1916) -- the brain transmits consciousness rather than generating it, in much the same way that a lens transmits or focuses light without actually acting as the source of the light, or the way an organ pipe transmits or focuses sound without actually generating or originating the sound. This fascinating subject is treated at greater length in a fascinating examination entitled "Does Consciousness Depend on the Brain?" by Chris Carter.

If what we might call the "lens suggestion" of William James is correct (or at least closer to the truth than the idea that consciousness is strictly a byproduct of the physical activity of the brain), then animals might "transmit" or "focus" similar extra-material perceptions, perhaps sometimes being more attuned, sometimes less attuned, to the same extra-material awareness that some humans can also perceive.

On the night that Titanic struck the iceberg (the collision took place at 11:40 pm on Sunday night, April 14, or within a minute or two after), Mr. Butler reports that passengers in Third Class were engaged in "another of the seemingly endless dances" when, "In the middle of the merriment, a large rat suddenly appeared out of nowhere, eliciting screams of terror, some real, some feigned, from the young women. A handful of the men dashed after the offending rodent, and the dance was under way again" (65).

The behavior of rats deserting a sinking ship is of course so legendary as to have passed into proverbial idiom, but how can one explain unease among rodents hours before a ship hits an iceberg? Again, this incident is perhaps only coincidental, taking on perceived significance only in hindsight of the disaster, and if it were the only one that was reported by the survivors of the tragedy that night it could and should be dismissed as such, but in the presence of so many other data points, it is at least prudent to consider the possibility that something other than coincidence might have been going on prior to that fateful collision.

Here is a link to another website examining premonitions of disaster prior to the Titanic, in this case mostly dealing with fictional accounts published years earlier that seemed to share numerous details with the actual voyage, in some cases remarkably many details.

Here is an even more interesting article, published in Atlantis Rising in 1999, dealing with the subject of premonitions, and detailing accounts of premonitions from other disasters as well as those surrounding the Titanic's sinking. That article also contains a helpful paragraph discussing the difference between simple fear or dread and a premonition, which says:

This is an important distinction. As someone who has made hundreds of skydives and participated in dozens of military tactical airborne operations (often at night with heavy gear and sometimes in atrocious weather conditions), I can report that I have had several occasions where I experienced what the paragraph above would describe as "vague and not unusual" feelings of general fear and unease prior to some jumps, but nothing ever came of them. They were not at all specific, spontaneous, or full of "great clarity." They were just ordinary fear, not premonitions (if true premonitions even actually exist).

Perhaps some of the incidents surrounding the voyage of Titanic also fall into this category, but the number and urgency of some of the feelings of awareness of impending disaster in that incident and in others argues that we should not be too quick to dismiss the possibility that true premonitions may have been involved in some cases. Before asserting that all the examples above are only "fear" and not premonitions, note that I myself never wrote any letters of the sort mentioned above prior to any airborne operations that turned out to be uneventful, and note also that Chief Officer Wilde was a very experienced officer with many ocean crossings under his belt (and no indication that he wrote his sister with ominous letters prior to other crossings).

For more musings on the significance of the tragic voyage of Titanic, be sure to also visit the recently-published essay, "Titanic and the Fall of Civilizations." 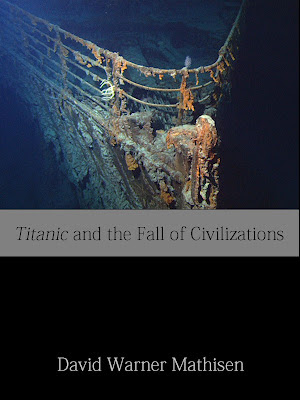 Note: for my most recent thoughts on the Titanic tragedy, see "Titanic conspiracy, due diligence, natural law and mind control," 04/13/2014.
Posted by David Warner Mathisen at 12:26 AM