A heartfelt portrait of John Blofeld from Daniel P. Reid 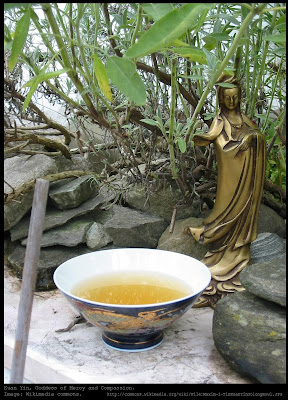 Here is a link to a deeply moving essay by Daniel P. Reid entitled "The Wheel of Life."

Rather than try to summarize, I would prefer to encourage you to read it for yourself.

By way of background, here are some links to a few of Daniel Reid's works:

The Tao of Health, Sex, and Longevity: A Modern Practical Guide to the Ancient Way.

The Tao of Detox: The Secrets of Yang-sheng Dao.

The Art and Alchemy of Chinese Tea.

A Handbook of Chinese Healing Herbs.

Taoism: The Road to Immortality.

Bodhisattva of Compassion: The Mystical Tradition of Kuan Yin.

The Chinese Art of Tea.

In addition to being a fond remembrance of John Blofeld, the essay above also touches on the exemplary way that he dealt with matters of life and death. Related to this subject, of course, is perhaps most remarkable and striking part of Daniel Reid's evocative essay, which relates the account of John's visits to his daughter in a recurring dream, by which she was guided to the temple where he desired that his earthly remains should repose.


John’s last wish had been to have his ashes interred in a Kuan Yin temple in Thailand. Kuan Yin, the beloved Chinese “Goddess of Mercy,” had always been John’s favorite Buddhist deity, and he devoted an entire book to her, Bodhisattva of Compassion: The Mystical Tradition of Kuan Yin.

Again, I will let you read the account exactly as Mr. Reid relates it, as it is much better that way.

It is worth noting that this series of events recounted by Daniel Reid resonates strongly with some of the subject matter discussed by Sheldon Norberg in the New Dimensions Radio interview which was discussed in this previous blog post (post contains links to the interview itself). In that interview, Mr. Norberg also gives examples from his personal experience in which persons were visited repeatedly in dreams in very much the same way (although not always benevolently).

I have admired Mr. Reid's writing since discovering one of his books while I was a cadet at West Point, in 1989 or so. It is of personal interest to me that material relating to this topic always connects back to West Point in some way (for me).

However, leaving that personal note aside, Daniel Reid has done us all a great service by sharing this memoir of his friendship with John Blofeld, whose character and personality shine through Mr. Reid's account. It is truly worthy of much reflection.