GMOs in the news, and in your summer barbecue 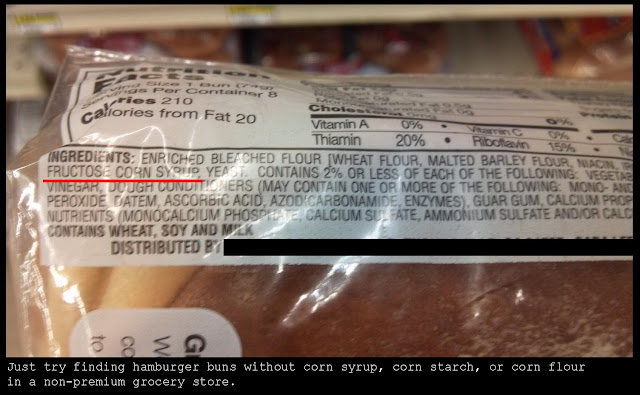 Genetically-modified crops have been in the news lately, and as this blog has pointed out before, there are many food items that are literally impossible to find at a normal, non-premium grocery store in the United States that do not contain ingredients from one of the eight often-transgenic crops currently approved for sale as human food.

Those eight crops (as of time of publication -- more may be approved in the future) are: corn, soy, cottonseed (consumed by humans as cottonseed oil), canola, sugar beets, more than half of Hawaiian papaya, and a small percentage of zucchini and yellow (crookneck) squash.  A previous post discussing this list, and some of the arguments of those concerned that genetically-modified organisms may pose hazards to humans who eat them, can be found here.

The first crop on that list, corn, is overwhelmingly transgenic in the US at this time, with over 80% of corn produced now GMO.  Unless specifically told otherwise by a label that reads "GMO free," a consumer who is trying to avoid consuming genetically-modified organisms for any reason (personal conscience, health concerns, or suspicion that these foods might potentially be unsafe in some way) would have to assume that a product containing corn-based ingredients is likely to contain GMOs.  Corn-based ingredients can include corn flour, corn starch, corn oil, or the nearly-ubiquitous high-fructose corn syrup.

It is not uncommon to encounter entire sections of a typical grocery-store aisle in which none of the options can be safely purchased by someone trying to avoid GMOs.  For example, the hamburger bun aisle at a typical American grocery store is likely to contain seven or eight different brands and styles of hamburger bun, but each and every one of them will contain corn products and none of them will state that they are GMO-free.  Some might prominently state that they have "no high-fructose corn syrup," but an inspection of the ingredients of these will often reveal other corn products instead.

Some will also contain soy products (as do the buns pictured above, in addition to high-fructose corn syrup).  Over 90% of the soy produced in the US is now genetically modified.

Note that you don't have to be a meat-eater to want to purchase hamburger buns.  Even those avoiding the consumption of meat from animals might want hamburger buns with a veggie burger or a giant sauteed portobello mushroom once in a while.

Of course, there are hamburger buns available without corn syrup, other corn products, or soy products, but to find them in the US you will probably have to visit a more "premium" grocery store, one that specializes in a higher percentage of organic ingredients and which caters to a more ingredient-conscious clientele.  These premium stores, of course, also cater to a more affluent consumer.

One wonders if the general public is aware that so many food categories their grocery aisles seem to deliberately contain ingredients from GMO-approved crops in every single product offering in their category.  One also wonders why manufacturers seem to almost perversely include some corn and/or soy in products that do not seem to call for corn or soy products (even "potato flour" hamburger buns often have corn and soy ingredients!).

Of course, many people believe there are absolutely no dangers to consuming genetically-modified ingredients.  This is an area in which everyone should do their own research and analysis and reach their own conclusions.  However, it almost seems that for the members of the general public who do not have access to a premium grocery store in their area, or who cannot afford to pay a premium for the most-common food items, the choice has already been made for them.