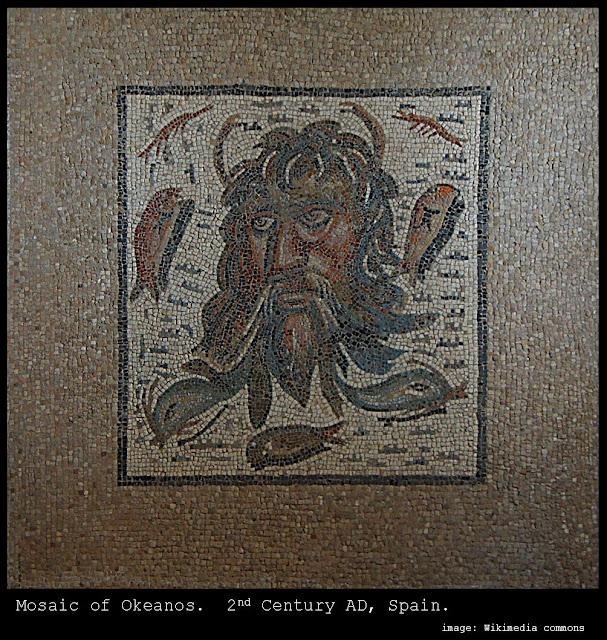 Above is an image of a beautiful mosaic depicting Okeanos, displaying truly inspired artistry (here is a link to the image on Wikimedia commons).

As you can see from this mosaic, Okeanos (or Oceanus) was almost invariably depicted as horned.  This previous post contains an image of a different mosaic showing Okeanos, also horned.

In Hamlet's Mill, Giorgio de Santillana and Hertha von Dechend explain that Okeanos is a very important figure in ancient myth, and they cite Professor R.B. Onians Origins of European Thought who believes Okeanos is an aspect of Achelous, the primal river "conceived as a serpent with human head and horns" (189).

They quote an extensive passage from Professor Onians, who argues that:  "Okeanos was, as may now be seen, the primeval psyche and this would be conceived as a serpent in relation to procreative liquid" and who made the important connection from there to "the procreative fluid with which the psyche was identified, the spinal fluid believed to take serpent form" (189). De Santillana and von Dechend remark that this idea is undoubtedly related to "the 'kundalini' of Indian Yoga" (189).

They also argue that Okeanos does not refer only to the earthly ocean which surrounds all continents, but to the celestial ocean, for Okeanos is described with attributes suggesting silence, placidity, untiring regularity, stillness, and rotation -- all attributes which belong "to the starry heavens" (190 -- see also the previous blog post linked above, where this connection is discussed further).

If so, and the evidence is compelling, this is another important ancient indicator of the connection between microcosm and macrocosm (see this previous post).  Okeanos is simultaneously the untiring circle of the heavens, and the "psyche" inside every one of us, "the spinal fluid believed to take serpent form."

The Orphic Hymn 83 is addressed to Okeanos.  Here is the 1792 translation by Thomas Taylor of that 83rd Hymn:

OCEAN I call, whose nature ever flows,
From whom at first both Gods and men arose;
Sire incorruptible, whose waves surround,
And earth's concluding mighty circle bound:
Hence every river, hence the spreading sea,
And earth's pure bubbling fountains spring from thee:
Hear, mighty fire, for boundless bliss is thine,
Whose waters purify the pow'rs divine:
Earth's friendly limit, fountain of the pole,
Whose waves wide spreading and circumfluent roll.
Approach benevolent, with placid mind,
And be for ever to thy mystics kind.

De Santillana and von Dechend note that the ninth line, which Taylor has here translated "Earth's friendly limit, fountain of the pole" is yet another indication that Okeanos refers to the starry heavens.  The actual Greek here reads terma philo gaies, arche polou -- "beloved end of the earth, ruler of the pole" as de Santillana and von Dechend put it.  Okeanos is addressed as the ruler (arche) of the pole, that point in the sky around which the entire heavens appear to turn (the point in the heavens above the earthly pole).

The final line of the Orphic Hymn to Okeanos refers to mystics, which also suggests the macrocosm-microcosm theme.  The mystics of Okeanos ("thy mystics") would be those who are able to achieve a mystic union or identification or merging with Okeanos, "whose nature ever flows."
Posted by David Warner Mathisen at 12:01 AM