Why does earth's inner core spin differently from the rest of the planet? 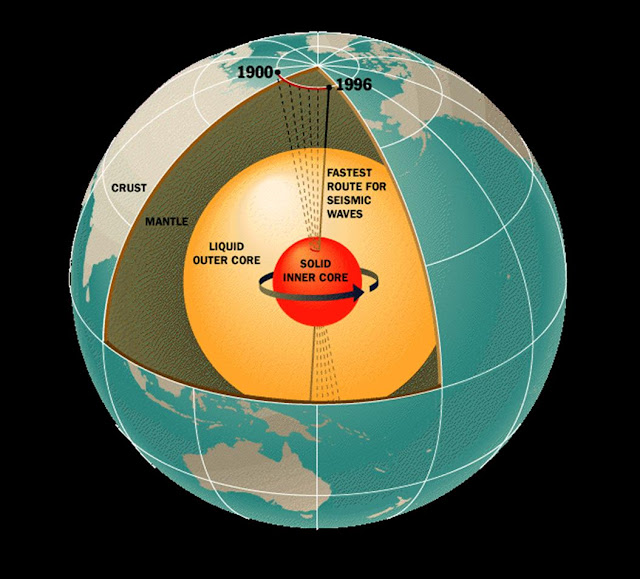 Here's a link to a recent article entitled "Earth's center is out of sync," which discusses recent work by scientists which reveals more information about earth's inner core, thousands of miles beneath our feet.

The scientists used measurements of the waves sent through the earth by earthquakes and determined that, not only does earth's solid inner core rotate at a different rate than does the outer earth (which similar studies of earthquake waves had previously suggested) but that this different rotation rate of the inner core varies with time.

Why does the earth's inner core, which is thought to be a solid ball of nickel and iron (primarily) at the very center of the earth, surrounded by a molten outer core, rotate at a different rate -- and in a slightly different direction -- from the rest of the earth?

The answer to that question (as with many other questions involving earth geology) will depend upon the framework or model that informs the person giving the answer.

As you might expect, the hydroplate theory of Dr. Walt Brown provides an answer for this phenomenon, and one which fits in with the hydroplate theory's description of events which would have taken place surrounding the catastrophic global flood which shaped so many of the features we see around us on the planet's surface.

The hydroplate theory argues that the eruption of massive amounts of water trapped beneath earth's crust removed enough continental material to cause the basement rock to bulge "upwards" (away from earth's center), which created the mid-oceanic ridge.  This upward-bulge motion created massive frictional heating and melting inside the earth, but that's not all -- it also caused a massive suction "inwards" (towards the earth's center) on the opposite side of the planet, creating the "hole" that today is known as the Pacific basin.  This shifting of material inside the earth caused enormous friction and melting.

This event also caused the continents to slide away from the center of the Atlantic and towards the newly-created Pacific, a slide which led to the creation of almost all the terrain features we see around us.

Dr. Brown explains how the internal shifting of mass and the accompanying friction and melting led to the creation of both the solid inner core and the liquid outer core of the earth (found in the chapter entitled "The Origin of Ocean Trenches, Earthquakes, and the Ring of Fire" in his book, available online in its entirety here):

Suppose the inner earth initially had a more uniform mixture of minerals. Heating would first melt minerals with lower melting temperatures, which would allow denser grains to settle and lighter grains to rise, a process called gravitational settling. This would generate much more heat and produce more faulting, melting, and gravitational settling. After many such cycles, the earth’s core would form with solid, denser minerals (containing iron and nickel) settling to form the inner core and the melt forming the liquid outer core. Shifting so much mass toward the center of the earth and doubling the density of the rock melting below the crossover depth would increase earth’s rotational speed. Today, the earth spins 365.256 times each year, but there are historical reasons for concluding that a year once had 360 days.35 [For details, see "Melting the Inner Earth" on pages 535–538.]

We saw that the skater in Figure 81 spins faster as she draws her arms closer to her spin axis. Likewise, as denser minerals settled through the magma toward the center of the earth, the inner core spun faster than the outer earth. The inner core is still spinning faster (by about 0.4° per year),36 because the liquid outer core allows slippage.

The above quotation, along with helpful illustrations and diagrams, can be found on this page of that online chapter.

The sequence of events proposed by the hydroplate theory clearly explain the origin of a solid metal core suspended in a liquid molten outer core.  The situation arose from the massive changes wrought by the bulging upwards on the Atlantic side which pulled rock upwards all the way through the earth to pull rock inwards and downwards on the Pacific side.  Molten rock below a certain depth (called the "crossover depth") sank towards earth's center, where the heaviest and densest materials (primarily nickel and iron) formed the inner crust, and the less dense molten liquid material remained as the outer core.

Dr. Brown explains this process more fully, with plentiful technical details and supporting formulas, in notes referenced and linked in the above block quotation, which can be found here.  Part of that extended discussion reads:

[. . .] during the flood, mass shifts within the Earth generated internal friction, heating, and melting. Melting, especially near the center of the Earth where pressures (and thus frictional heating) were greatest, was followed by gravitational settling of the denser minerals and chemical elements. Rock that melted below the crossover depth contracted. [See “Magma Production and Movement” on page 154.] This produced further mass shifts (faulting), frictional heating, melting, and gravitational settling.  [. . .]

Particles that melted after they fell added to the liquid outer core; denser particles that did not melt or that solidified under the great pressure near the Earth’s center formed the solid inner core.

The details given also explain why the core of the earth is so hot, and why it spins at a different rate than the rest of the earth.  Like an ice skater going into a spin and pulling in her arms and legs, this process sped up the rotation of the solid inner core inside its liquid outer core.

Dr. Brown once explained to me in a telephone conversation that if the earth were to somehow become transparent so that we could see all the way down to the inner core, we would be able to see that it was rotating at a different speed and direction that we are out here on the earth's surface.  We don't perceive the earth's rotation, so we would feel as though we were staying still, but even so we would see the earth's inner core rotating -- a most amazing thought!  It is probably a fact of which most people are completely unaware -- I was certainly unaware of it until he explained it to me that day.

The hydroplate theory proposes a mechanism by which this startling situation could have come about, and one which fits in with the series of events that would explain so many other pieces of geological evidence on our earth's surface.  The ongoing findings of scientists regarding the inner core appears to be additional supporting evidence for the hydroplate theory.

On the other hand, conventional explanations run into some problems in explaining how the earth's solid inner core and molten outer core originated, as Dr. Brown explains in note 21 on this page of his online book.  This discussion is also very closely related to the question of how earth obtained such a strong magnetic field, which is also covered by the hydroplate theory and discussed in this previous blog post.

Based on the truly astonishing amount of geophysical evidence which Dr. Brown's theory explains, it should be carefully considered as a strong contender for understanding our planet.
Posted by David Warner Mathisen at 11:15 PM