Is bee pollen one of nature's perfect foods? 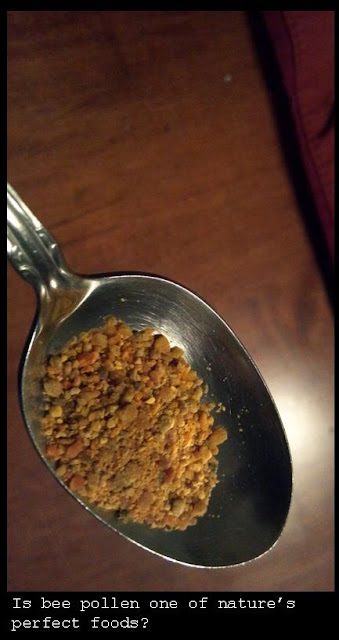 (if reading this on a mobile device, please scroll down to read the blog post)


Some previous posts have discussed ancient knowledge about medical science which appears to have been lost (or suppressed) somewhere along the way, and which is no longer common knowledge today.

For example, the post entitled "Basking in the sun" noted that ancient historian Herodotus recounted stories of the healthful benefits of a daily sun bath, and that Pliny the Elder apparently indulged in a daily sun bath for health as well.  However, few today are told that a sun bath promotes good health, although that post presented some links to modern sources who believe that sun baths are good for health, and who present evidence to support their assertions.

Another practice that was recommended by the ancients, but about which conventional medical professionals remain largely silent, is the consumption of bee pollen for human health.  Again, Pliny speaks extensively of bees, as well as of the beneficial aspects of their products including honey, propolis, and pollen (see his Natural History, which can be read online here, where he discusses bees and their products in Book XI, beginning in chapter 4).  There is evidence that the ancient Egyptians were skilled beekeepers and that they buried honey and possibly bee pollen in their tombs (suggesting a high regard for its properties).  Traditional Chinese medicine also appears to have long recommended the health benefits of bee pollen.

Many voices in the modern alternative medicine community have high praise for the health effects of bee pollen.  This article, for example, on Dr. Mercola's website praises the positive effects of bee pollen so extensively that it is difficult to believe that something so beneficial could be so unrecognized by the general public and the medical community.

On the other hand, some authors claim that bee pollen's benefits are overhyped and warn that some portion of the population will find bee pollen to cause digestive or other problems.  In Letters from the Hive, Stephen Buchmann argues that:

[. . .] none of the health claims made for pollen have been substantiated in properly controlled clinical trials.  Though it is high in proteins, lipids, antioxidants, and vitamins, these nutrients can be obtained in other, more easily digested foods at considerably less cost.

And then there are the side effects some people experience when taking pollen.  The major adverse reactions are stomach pain and diarrhea, reported by up to 33 percent of individuals in some studies.  Irritation and itching of the mouth and throat are also sometimes reported.  So leave bee pollen to the bees, and enjoy their honey instead.  247.

While the amazing claims about bee pollen's benefits touted by some proponents might seem somewhat excessive, the arguments against bee pollen in these paragraphs may go too far in the other direction.  Bee pollen is "high in proteins, lipids, antioxidants, and vitamins" but we should "leave bee pollen to the bees" because all of those nutrients can be better obtained elsewhere?  Where else are all of these attributes found, one wonders?  What other single food has such a combination?

The adverse effects reported for bee pollen should certainly be taken into account, but again the warning that these are experienced by up to 33 percent of individuals seems remarkably high.  Of course, the author says that this was "in some studies," but since those studies are not identified, it is difficult to know how large the studies were or whether other studies had lower incidences of adverse reactions.

There are many areas in which the consensus of "expert opinion" can be completely wrong for decades, a phenomenon which has been discussed in many other posts on this blog.  It is also clear that much ancient wisdom has been lost or even deliberately destroyed or suppressed.

In Serpent in the Sky, John Anthony West presents evidence that the ancient Egyptians possessed extremely sophisticated medical knowledge, among the other advanced sciences that seem to have appeared "full-blown" at the earliest stages of ancient dynastic Egypt, which together are very difficult to explain under conventional historical models.  Whether the ancient Egyptians were the source of the apparently widespread ancient reverence for bee pollen and other bee products as beneficial to human health is not yet clear.  However, it is an intriguing question.

Readers may be interested in pursuing this subject further on their own.
Posted by David Warner Mathisen at 12:37 AM