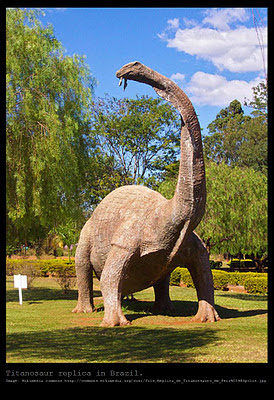 Here's a link to a recent article found in NewScientist discussing the recent confirmation of the discovery of fossils from a member of the Titanosaur branch of sauropod dinosaurs.

The family of Titanosaurs were enormous, herbivorous dinosaurs weighing up to 100 tons.

The bones of this Titanosaur were found on James Ross Island, a large island near the end of the Antarctic Peninsula (not to be confused with Ross Island, which is also in Antartica but near the McMurdo Sound, is home to Mt. Erebus, and at longitude 167o E is closer to New Zealand, while James Ross Island at longitude 57o W is much closer to the southern tip of South America). Other dinosaur bones of smaller species (runners, not massive sauropods) have been found on James Ross Island in previous years, and sauropods have been suspected based on fossil findings but until now not confirmed.

Here is a map of Antarctica showing the Antarctic Peninsula and the approximate location of James Ross Island: 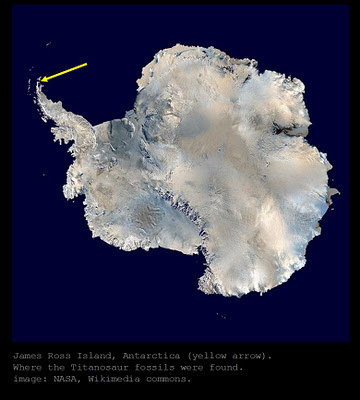 Below is a closer view using Google Maps to show the location of James Ross Island where the Titanosaur fossils were found: 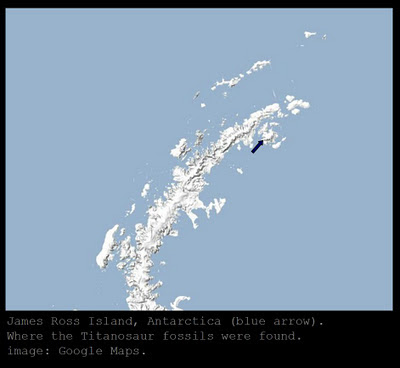 The discovery of the fossils of such a massive plant-eater should raise some questions, such as "How could such a massive beast get enough to eat down there in Antarctica?" At latitudes around 64o South, James Ross Island is almost on the Antarctic Circle (which runs at 66o 33' S latitude). That means that even if earth had been much warmer when this sauropod was supposedly shaking the earth with its mighty tread, there would have been precious little sunlight for half of the year where it was found.

We have already discussed some of the problems the conventional theory of tectonics has explaining the fossils found in the far north and far south, near or within the Arctic and Antarctic Circles, in this previous post.

A related post here discussed the fact that fossils of animals and plants that seem to belong to more temperate latitudes pose a dilemma for tectonics advocates, because they have been forced to invent multiple tectonic plates below Antarctica to try to explain the sheer disruption of sediment layers by uplifted mountains (which split the sediments by over 3,000 feet in places), but the fossils require an Antarctica that has drifted over time to its present extreme latitude, and putting it on a single tectonic plate is more conducive to an explanation of such a drift.

As both of those previous posts explain, the hydroplate theory of Walt Brown solves this dilemma quite elegantly, with evidence that the events surrounding a global flood caused earth to experience a single and relatively rapid "Big Roll" in the distant past.

The hydroplate theory can also explain another thorny problem with the sauropod fossils found on this remote island, which is "How did such a lumbering beast get itself to this island?" Scientists believe that members of the Titanosaur branch could possibly cross rivers, but certainly not swim out into the open ocean to cross the distance required to reach Antarctica and James Ross Island.

The hydroplate theory explains that the oceans would have been much lower relative to the continents in the centuries after the flood, as this previous post explains. This would have created land bridges not just between what are now called Siberia and Alaska but in fact between every continent and major land mass on earth, including Antarctica (the map which shows ocean depths, with shallower depths in lighter colors, presented in this previous post can help readers visualize these bridges -- even Australia would have had one, although there may have been some narrow waterways that needed to be negotiated between Australia and Asia).

Note in the map below that James Ross Island is situated very near to the proposed land bridge to Antarctica from South America. This bridge would not run directly in a straight line but curved from the southern tip of South America towards the east, before curving back west and meeting up with the Antarctic Peninsula. Nevertheless, the Titanosaurus whose bones have now been found could very well have walked to Antarctica!

Of course, based on our previous examination of how fossils are formed, and the hydroplate theory's reasonable explanation that almost all fossils on earth are the product of rapid burial in sediments during the global flood event, this sauropod probably died long before the Big Roll and the land bridges we have been discussing above, which actually makes sense based on the fact that it and the vegetation needed to feed it would not be likely to survive at the extreme latitude where James Ross Island is today. 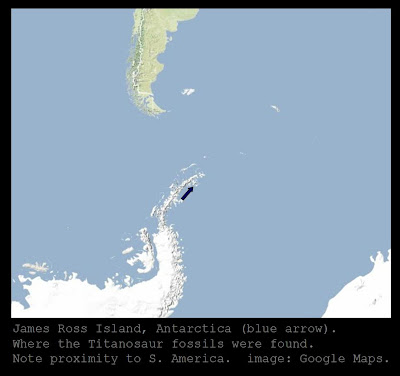 It would appear that the recent confirmation of Titanosaur bones at James Ross Island in Antarctica supports the hydroplate theory, as do hundreds and perhaps even thousands of other pieces of evidence around the globe.


Posted by David Warner Mathisen at 12:33 AM