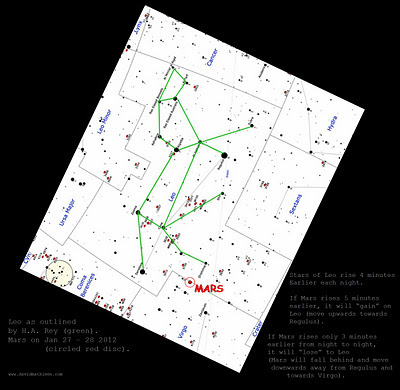 The magnificent constellation Leo the Lion is now really visible in the eastern sky after dark, rising up to follow Orion and clearing the horizon by about 8:30 pm at latitude 35o N (depending, of course, on the terrain of your horizon and your observation point).

To find Leo, you can follow some of the description given in these previous posts:

"Ever wonder why Ishtar, Cybele, Rhea, and other aspects of the Great Goddess ride lions?"

and
"The Gate of Cancer"

Mars, the red planet, is now clearly visible, trailing the Lion into the sky (see diagram above). It is large and bright, not far from the Lion's bright tail (which is marked by the bright star Denebola).

Like the other planets, Mars does not "twinkle" the way that stars twinkle. If you wonder why, the easiest way to intuitively understand it is to ask yourself if the moon twinkles at night. The answer is: of course not! Neither do the planets, which shine the same way that the moon does, by reflecting our sun's light on their surfaces.

You should have no trouble locating Mars using the above diagram. You may prefer to use the simpler outline of Leo shown in this previous blog post (about 3/4 of the way down the post there is a star diagram of Leo). It outlines only the brightest and most visible stars of Leo. I prefer the conceptual outline as illustrated by H.A. Rey, but the stars which make up the Lion's dignified face and muzzle are rather faint and difficult to see unless you are in a very dark location.

The earth is currently passing Mars on our orbit around the sun. Both planets orbit in the same counter-clockwise direction (commemorated by ancient civilizations in their chariot races). Earth periodically passes Mars on our inside track in this race -- every twenty-five and a half months, in fact.

The period in which we overtake Mars can give us some of the most brilliant views of the red planet as we go by. It also creates the famous apparent retrograde motion, during which the planet seems to "go backwards" as we speed on past (just as a car on the freeway can seem to move backwards as you overtake it). This retrograde motion gave rise to the "epicycles" imagined by ancient thinkers who were trying to explain why it happened. The phenomenon is described in this Wikipedia article, as well as in this discussion from LaSalle University, which embedded some animation from the University of Tennessee (Knoxville) showing the reason for the apparent retrograde as well as showing the (incorrect) "epicycle" model.

The concept of the retrograde motion of Mars may not be immediately clear from some of the explanations on the web, however. First of all, if you stare at the sky, you will not see Mars appearing to move forwards, backwards, or anywhere else -- it looks stationary, just like the rest of the stars. Certainly, during the night, it will move from the eastern horizon across the sky towards the western horizon, due to the turning of the earth, but so will the rest of the background of stars. So, what is this "retrograde motion" we are supposed to be looking for?

As we've discussed previously, stars in the region of the zodiac and celestial equator rise earlier by four minutes each night, as a result of earth's progress around the sun (the metaphor of the "earth's orbit inside your dining room" is helpful here, thinking of the ecliptic constellations as posters on the four walls of the dining room as the earth orbits around the center of the room).

This four-minute advance each night means that the stars of Leo will be a bit higher the next night at exactly 9 pm than they were the night before at the exact same time (they had a four-minute head start the next night, and tomorrow night they will be four additional minutes further on at the same 9 pm observation time).

Now, if Mars were to rise exactly four minutes earlier, then it too should be ahead by the same amount the next night, and the stars of Leo would "gain no ground" against the planet, but this is not what usually happens. If Mars rises only three minutes earlier each night, then Leo will slowly "outstrip" Mars (since the stars of Leo are rising four whole minutes earlier). Leo will slowly "get away" from Mars, and Mars will end up in the following constellation (Virgo) after a while of this. Mars will have moved eastward against the background of the stars. In the diagram above, it will be as if Leo is rising upwards (towards the top of your screen) faster than Mars is, and thus Mars will be figuratively "falling" towards the bottom of your screen. Since the diagram above pictures Leo rising, the bottom of your screen is where the eastern horizon is located: by falling "downward" Mars is moving eastward against the background of the stars (Mars is still moving westward each night due to the turning of the earth -- it is only relative to Leo and Virgo that Mars can be said to be moving eastwards).

Returning to our diagram above, if Mars were to start rising five and even six minutes earlier each night, and Leo's stars only rise four minutes earlier each night, then you can see that Mars will begin to "overtake" Leo, moving "upwards" on the diagram (relative to the background stars), and head up towards Regulus (the brightest star in the Lion, marked by the largest black dot and forming one of his forepaws). This is the retrograde motion.

Mars just began its retrograde motion within the last few days, and is now moving from just inside the border of the Virgo constellation back into the territory of Leo (crossing that line around February 3) as it "moves towards" Regulus. The retrograde period ends around April 15 (the tax deadline for regular filing in the US).