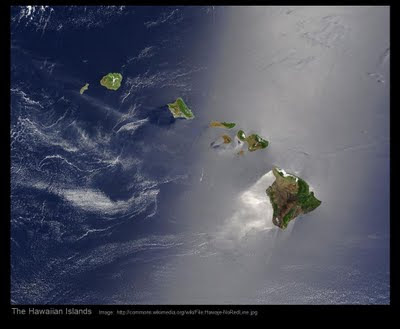 In the previous post, "Vindication for Thor Heyerdahl," we examined new evidence that appears to support some of Heyerdahl's theories about contact between Easter Island / Rapa Nui and the Americas.

In that post, we noted Heyerdahl's assertion that ancient voyagers who set out into the Pacific from the Americas would likely first encounter either Easter Island or Hawaii, depending on their point of departure and direction of travel. We also noted the fact that the Polynesian historical traditions themselves clearly relate -- "and quite independently on widely separated Polynesian islands -- that the first land discovered and settled by their ancestors in the ocean was an island, or rather a group of islands, referred to in most Polynesian dialects as Hawaiki, in others as Hawai'i" (Heyerdahl, American Indians in the Pacific, 40-41).

Today, despite the extensive evidence Heyerdahl mustered in support of his theory, the idea that Polynesia was originally occupied by a people coming from the east (the Americas) is almost universally rejected, and along with it the idea that Hawaiki could refer to Hawaii itself as the first ancestral homeland in the Pacific, where some remained to settle and from which others spread out across the Pacific to discover and settle new islands.

As mentioned in the post linked above, some modern historians have held that Hawaiki must refer to Java in Indonesia, and that the oral traditions which describe Hawaiki as being located east of other Polynesian lands (such as New Zealand) must be incorrect -- in other words, maintaining that the keepers of these traditions didn't know what they were talking about and that some of the most superb mariners the world has ever known didn't know their east from their west.

Others today argue that Hawaiki may have been Taiwan (a theory we shall look at shortly).

Thor Heyerdahl provides characteristically thorough evidence and analysis in support of his assertion that Hawaiki actually refers to Hawaii. First, he notes that while the oral traditions found on almost every other Polynesian island refer to a migration from Hawaiki, no such oral tradition exists on Hawaii itself. If Hawaiki were actually in Java or Taiwan, such an omission would be unusual, but if Hawaii is the Hawaiki referred to by other islanders, then we would not expect there to be such a legend on Hawaii itself.

Further, Heyerdahl points to texts which historians made in the early 1800s of Maori oral tradition regarding the route of their ancestors from Hawaiki to Aotearoa / New Zealand. He notes that according to Maori tradition, Kupe was the first to reach Aotearoa from Hawaiki, and he later returned to the islands of Hawaiki. Later, according to Maori history, we learn that a progenitor named Whatonga and a number of his firends went on a visit from an island called Ahu to the main island called Hawaiki, to take part in a canoe race (170).

During the race a strong offshore gale carried Whatonga and others out to sea, where they became lost in the fog and eventually ended up in Rangiatea (the Maori pronunciation of Raiatea, in the Society Islands near Tahiti), where they made preparations for their return to Hawaiki and eventually left to successfully return to Hawaiki. However, in the interim, Whatonga's grandfather had set out to search for him, first landing in the Samoan group of islands, then proceeding to Rarotonga, and then to the Chatham Islands and finally to New Zealand in his search.

When Whatonga arrived in New Zealand and heard that Toi had gone to find him and not returned, he set out himself in a new deep-sea canoe named Te Hawai, and after reaching Rarotonga and hearing of his grandfather's earlier visit there, continued to Aotearoa and finally caught up with Toi there. These accounts were "painfully memorized by every generation among the subsequent occupants" of Aotearoa (170). Analysis of the genealogies that were also carefully memorized and passed down indicates that Kupe's visit was probably around AD 950, and that of Toi and Whatonga around AD 1150.

Heyerdahl notes the very clear parallel between the names of the islands Ahu and Hawaiki and the islands of O'ahu and Hawai'i, as well as the fact that historians have recorded that the island of O'ahu was originally called Ahu (170).

Another remarkable tradition preserved by the Maori is the sailing directions from Hawaiki, and particularly the starting point. Tradition states that "the bows of the canoes must be directed straight south from Maui-taha and Maui-pae" (172). These two names denote twin islands within the Hawaiki group, and in fact there are two small islands to the west of Maui (seen in the image above -- Maui is the island just north and west of the Big Island or Hawaii itself, and to the west of it can be seen the islands of Lanai and Kahoolawe, which may correspond to Maui-taha and Maui-pae). Hawaiian tradition also tells us that voyages were to start from this location (172). Is it not remarkable that Maori tradition mentions the names of the islands Maui, Oahu, and Hawaii?

From there, the sailing directions of the Maori oral tradition tell us, the canoes must proceed due south, in order to reach Rarotonga (which was known as the "Road to Hawaiki" among the Maori), after which they were to bear southwest, placing the prow to the left of the setting sun (172). These directions are perfect for reaching New Zealand from Hawaii, but atrocious if one wishes to reach New Zealand from Java or Taiwan.

Heyerdahl also provides quite convincing evidence from the preserved genealogy lists of both the Maori and the Hawaiians, in which some names and generations match (the names of both the husband and the wife, and on more than one occasion) (172-172).

Recently, some historians have argued that Hawaiki must refer to Taiwan, and point to mitochondrial DNA evidence as conclusive proof. This article from the Economist in 2005 makes that case, noting that "In a study involving 640 people from nine Taiwanese tribes, Dr Trejaut and Dr Lin found three mutations shared by Taiwanese, Polynesians and Melanesians (who also speak Austronesian) which are not found in other Asians."

Of course, the presence of unique mitochondrial DNA shared by Taiwanese and Polynesians could indicate the origins of the Polynesians from the islands of Taiwan, but it could just as easily indicate a visit from the opposite direction. This is especially true since the people whose DNA was tested are from an ancestry of a different origin than the majority of Taiwan's inhabitants. The mitochondrial DNA studies are an important clue, but they should be included along with all the other evidence in the search for the truth, rather than being used to force the acceptance of a single theory.

Since the publication of Heyerdahl's book in 1953, successful voyages have been made from Hawaii to Tahiti and other destinations in the Pacific by the Polynesian Voyaging Society, using double-hulled canoes and other technology available during the era before European contact. This map of the first voyage of the Hokule'a in 1976 clearly shows Raiatea, where Maori oral history tells us that Whatonga first landed after he was blown off course and then lost in the fog during his race.

This issue illustrates the fact that even today, the analysis of evidence regarding even the fairly recent past can be disputed by reasonable observers. The issue is also important from many other perspectives. First, it is important to the Polynesians themselves. It is also important because, as we have seen in several previous posts, the mysterious origins of the people of Polynesia appear to hold numerous clues concerning mankind's very ancient past.

Caution: staring too long at the above image of Hawaii may induce an irresistible urge to go surfing.

Posted by David Warner Mathisen at 7:38 AM