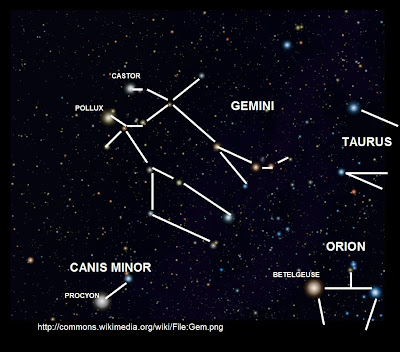 Also shown and labeled is the constellation Canis Minor (the Little Dog), which is very close to Gemini and associated with them in ancient mythology in a way similar to the association of Canis Major and Orion. Like Canis Major, which contains the brilliant and mythologically important star Sirius (one of the most mythologically important stars in the sky), Canis Minor also contains an important star, Procyon (a name which means "before the dog," which H.A. Rey tells us is because it rises about forty minutes before Sirius, the Dog Star)(44). In the diagram above, the names of important stars are shown in smaller type than the names of the constellations.

Gemini is currently far to the west as the sky turns dark, meaning that it has been making its way across the sky during daylight hours. When the sun goes down, Gemini is far to the west and will be setting soon as well. At latitude 35o north, Gemini's brightest star Pollux (shown in the diagram) rises at 8:18 in the morning on June 6 (after the sun has already come up, so Pollux cannot be seen) and reaches its highest point (known as transit) at 3:49 in the afternoon (when it is again still invisible due to the daylight), and then sets at 11:19 pm. Each day, it will rise and set four minutes earlier due to the progress of earth around the sun (as discussed in this previous post), so that soon Gemini will rise and set entirely during hours in which it is obscured by the sun.

The nearby constellation Canis Minor has only two stars, but both are bright and easy to recognize. The brighter of the two is Procyon, one of the ten brightest stars in our sky. On June 6 at latitude 35o north, Procyon rises at 9:26 am and transits at 3:43 pm (both during daylight hours), and sets at 9:59 pm.

Giorgio de Santillana and Hertha von Dechend have a fascinating discussion of the importance of the Little Dog and the Twins in Appendix 28 of Hamlet's Mill. They note that in mythology, "the hairy partner of the Twins, the 'Dog,' is the prototype of the older one who is cheated out of his primogeniture in various ways" (405).

There are many legends in which there are two heroes who are twins of one another, and one twin is hairy and very much a wild-man or child of nature. The most obvious of these pairs may be Gilgamesh and Enkidu, treated at some length in the Mathisen Corollary and also mentioned in the first hour of the recent Red Ice Radio interview about the book. Enkidu is a wild-man, described in the first tablet of the Gilgamesh series this way (in the online edition of the translation by Maureen Gallery Kovacs):

His whole body was shaggy with hair,
he had a full head of hair like a woman,
his locks billowed in profusion like Ashnan.
He knew neither people nor settled living,
but wore a garment like Sumukan.
He ate grasses with the gazelles,
and jostled at the watering hole with the animals;
as with animals, his thirst was slaked with (mere) water.

These characteristics of Enkidu are important, especially since there are other legends in which one of two twins is described as being covered with hair. De Santillana and von Dechend mention Jacob and Esau from the Hebrew Scriptures: Esau the elder is described as being "red, all over like an hairy garment" in Genesis 25:25, and when Jacob tricks Isaac into giving him the blessing instead of Esau, we are told that his mother Rebekah "put the skins of the kids of the goats upon his hands and upon the smooth of his neck" so that when Isaac felt Jacob's hands, "his hands were hairy, as his brother Esau's hands" (Genesis 27:16 and 27:23).

De Santillana and von Dechend also point out that in the second-oldest text of classical Japan, the Nihongi (also known as the Nihon Shoki) there is a similar set of twins, Hono-susori no-Mikoto (the elder) and Hiho-nonodemi no-Mikoto (the younger). In the account, the older brother serves the younger brother, and bespatters his body with red clay -- an interesting parallel to the account of Jacob and Esau. Also in the account, the younger brother is given two brilliant jewels by his father-in-law, with which he could control the tides of the seas as well as his wild elder brother. Is it possible that these two jewels are related to the two bright stars of Canis Minor?

It is remarkable to find such connections between the ancient accounts from the region of Sumer, Babylon, and Israel and those in Japan. Of course, because the Nihongi is believed to have been written in the year AD 720 (an interesting precessional number, although possibly this is a coincidence), it could be argued that the authors were somehow influenced by the Old Testament account (although not by the Gilgamesh Epic, since the tablets containing the Gilgamesh series had not yet been rediscovered in the ancient library of Asshurbanipal, or the cunieform writing on them deciphered by modern scholars). It is more likely that there was ancient contact that is not included in current historical paradigms.

Even more difficult to explain are connections with legends from the native peoples of the American continents. De Santillana and von Dechend find a dramatic connection here as well, in the legends of the Cherokee, where once again there is a set of twins, one of whom is a wild-man or child of nature like Enkidu. In the 1900 text by James Mooney entitled Myths of the Cherokee: from the nineteenth annual report of the Bureau of American Ethnology, 1897-98, we find the story of the son of Kana'tï and Selu (in chapter 3). These legends were collected from elders among the Cherokee in the nineteenth century; the elder telling this particular story prefaced it by saying, "When I was a boy, this is what the old men told me they had heard when they were boys" (242).

Long years ago, soon after the world was made, a hunter and his wife lived at Pilot knob with their only child, a little boy. The father's name was Kana'tï (The Lucky Hunter), and his wife was called Selu (Corn). No matter when Kana'tï went into the wood, he never failed to bring back a load of game, which his wife. would cut up and prepare, washing off the blood from the meat in the river near the house. The little boy used to play down by the river every day, and one morning the old people thought they heard laughing and talking in the bushes as though there were two children there. When the boy came home at night his parents asked him who had been playing with him all day. "He comes out of the water," said the boy, "and he calls himself my elder brother. He says his mother was cruel to him and threw him into the river." Then they knew that the strange boy had sprung from the blood of the game which Selu had washed off at the river's edge.

The parallels to the account of Gilgamesh and Enkidu are striking. Striking too are the parallels to the other accounts we have seen. For example,the account of the twins in the Nihongi, which also places the tale of the two brothers near the beginning of the world, and there are connections between the elder brother and the sea as well. Note that in all the accounts extraordinary skill in hunting plays a role (remember that in the Biblical account, Esau was "a cunning hunter, and a man of the field" (Genesis 25:27).

Note also the connection to the color red -- in the Cherokee account the wild twin sprang from the blood of the animals cleaned in the river, while in the Biblical account Esau is described as being red and hairy and in the Japanese account the elder brother covers himself in red clay.

Even more significant, in the Cherokee account the son of Kana'tï challenges his new companion to a wrestling match and will not let him go until his parents come and bring him home to try to tame him (echoes of both Jacob and Gilgamesh and Enkidu).

How can the conventional historical framework account for these stunning connections across disparate cultures in very remote locations? They are forced to argue that such legends simply grew up independently of one another, perhaps influenced by similar interpretations of the same celestial phenomenon, or else to fall back upon something like Jung's "collective unconscious." But it is very hard to explain how different cultures would all settle on the idea that the two stars next to Gemini resemble a hairy dog, or account for such peculiar details as the presence of the color red. The idea of the collective unconscious has similar difficulties -- especially since there is other (physical) evidence of ancient contact that cannot be explained by the collective unconscious the way that parallels in mythology might be (such as stone inscriptions, and even physical remains such as discussed here, here, and here).

De Santillana and von Dechend correctly observe that the mythological complex of the "Dog Twin" is vast, with important echoes in Ancient Egypt (where the Jackal was known as "the eldest" and associated with the title of Upuaut, "the opener of the way"). They state that it is a topic "of such a size and weight that it cannot be attacked here" and drop the subject, much to their readers' dismay!

However, it is clear that the constellations Gemini and Canis Minor have important connotations that span cultures that conventional history says were never in contact with one another. The common elements of the accounts of the hairy twin provide important additional supporting arguments for a theory of ancient trans-oceanic contact.

Try to take the time to observe the impressive spectacle of Gemini and Canis Minor, along with the waxing crescent of the moon, in the western night sky in the hours after sunset the next few days. When you do, think about these fascinating connections to the accounts left to us from ancient peoples about whom we still know very little.