Taurus and the Hyades 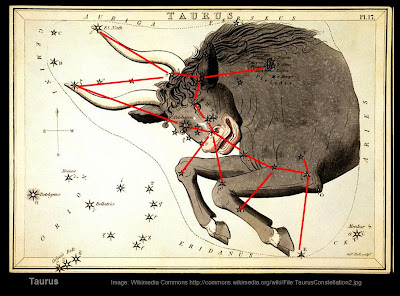 The Hyades and the Pleiades are visible in the eastern sky before dawn as the sun is rising in Taurus.

To see them, you will need to get to a place with a good view of the eastern horizon (no hills in the way) by about 4:30 am, but if you are able to do so, the view is well worth it. The sun is currently rising at 5:22 am for an observer near 35o north latitude, and the sky brightens enough to really begin to drown out the stars by about 4:55 to 5:00 am.

The chart above shows the constellation Taurus, first with the decorative or allegorical drawing common in previous centuries (this one is from a set of cards called Urania's Mirror from 1825, engraved by Sidney Hall), and then with the new graphic lines devised by H.A. Rey (shown here in red).

In the pre-dawn sky above the horizon, the easiest parts of the constellation to make out are the bright red star Aldebaran and the beautiful Pleiades above it. The Hyades are more difficult to make out, but you can see how they make the shape of a boomerang in this diagram from Sky & Telescope which depicts the celestial objects you can see looking east before the sunrise right now. The full "play-by-play" description from Sky & Telescope of the moon and planets in the east before sunrise and again in the west after sunset can be found here.

We have already discussed some of the mythology surrounding the Pleiades, which often take the form of a net in Greek mythology and other mythology around the world. The authors of Hamlet's Mill point out that the Hyades also feature prominently in many important myths, which they believed encoded ancient astronomical knowledge, some of it very sophisticated.

The boomerang-shape of the Hyades, so apparent in the Sky & Telescope diagram referenced above, gave rise to legends in which the Hyades became a weapon. In some cultures they were actually a boomerang, but more commonly they were encoded in myth as a jawbone, which of course also resembles their shape. In the Mathisen Corollary book, there is discussion about the important resemblance of these stars to the implement known as an adze as well.

For that jaw is in heaven. It was the name given by the Babylonians to the Hyades, which were placed in Taurus as the "Jaw of the Bull." If we remember the classic tag "the rainy Hyades" it is because Hyades meant "watery." In the Babylonian creation epic, which antedates Samson, Marduk uses the Hyades as a boomeranglike weapon to destroy the brood of heavenly monsters. The whole story takes place among the gods. It is known, too, that Indra's powerful weapon, Vajra, the Thunderbolt made of the bones of horse-headed Dadhyank, was not of this earth (see appendix #19).

The story is so universal that it must be seen as spanning the globe. In South America, where bulls were still unknown, the Arawaks, the Tupi, the Quechua of Ecuador spoke of the "jaw of the tapir," which was connected with the great god, Hunrakan, the hurricane, who certainly knows how to slay his thousands. In our sky, the name of the celestial Samson is Orion, the mighty hunter, alias Nimrod. He remains such even in China as "War Lord Tsan," the huntmaster of the autumn hunt, but the Hyades are changed there into a net for catching birds. In Cambodia, Orion himself became a trap for tigers; in Borneo, tigers not being available, pigs have to substitute; and in Polynesia, deprived of every kind of big game, Orion is found in the shape of a huge snare for birds. It is this snare that Maui, creator-hero and trickster, used to catch the Sunbird; but having captured it, he proceeded to beat it up, and with what? -- the jawbone of Muri Ranga Whenua, his own respected grandmother. 166.

If Maui caught the Sunbird in the net of the Hyades, and then beat it up with a jawbone, this almost certainly refers to the rising of the sun in the constellation Taurus, which is currently taking place. Be sure to get up early and check it out.

Posted by David Warner Mathisen at 7:53 AM