Museums that influenced, continued: the 1979 exhibit of the treasures of Tutankhamun 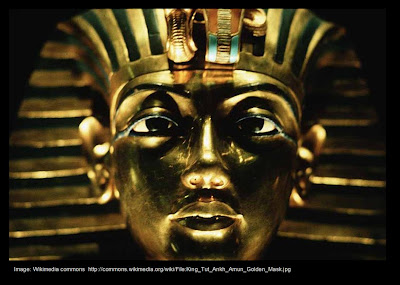 In 1979 the exhibit of the treasures of the tomb of King Tutankhamun came to San Francisco's De Young Museum, at the end of a three-year tour of the United States.

I was nine or ten years old, and already completely enthralled by ancient Egypt (I had already been corrected for using up all the masking tape in my classroom to make mummies out of sticks in second or third grade a couple of years before). My parents took me to see the exhibit at the De Young museum, waiting for hours in an enormous line that snaked back and forth across the grounds leading up to the building where Tutankhamun's treasures were displayed.

The exhibit was of course magnificent, with room after room of statues, canopic jars, thrones, animals, and jewelry. The centerpiece of the exhibit was the golden funerary mask, one of the most exquisite relics of the ancient world in existence, and as stunning today as it must have been on the day it was sealed in the tomb over 3,300 years ago.

The mask was placed over the head and shoulders of the mummy itself, which was then placed inside three successive nested sarcophagi. This mask did not accompany the recent return of the exhibit to the United States in 2005.

A short news clip describing the exhibit from 1976 (when it was in Washington DC, prior to making its way across the country) can be found on YouTube, here.

Martin Doutré believes that the numbers of the stripes on the nemes headdress of the golden mask contain astronomical and calendrical significance. As he explains in this article from his website, the mask contains counts of 13, 14, and 26 stripes along the important portions of the nemes, some of them in blue lapis lazuli, some of them in gold, and one of them an ornate central gold band surmounted by the vulture and cobra.

He also points out that the vulture atop the mask is not actually a vulture but a serpent with a vulture's head, which may have connections to the feathered serpents appearing frequently in ancient Central American statuary and mythology. His assertion that the ornate gold band associated with the two serpents may have equinoctial significance certainly rings true given the discussion of the symbology of the double solar spiral in this previous post, as well as the serpentine motion of the sun shown in the video linked in the third-to-last paragraph of this post.

Perhaps the most startling aspect of Mr. Doutré's argument is the assertion that the number of lines in the mask of King Tut may have a connection to the lines formerly found in the facial mokos of the Maori of Aotearoa New Zealand. In the post, he notes that these mokos very often had dark curving lines along the forehead of the subject which appear to be very similar in design to the lines of the nemes headdress. In fact, he also points out that many Maori mokos also feature a beautiful fleur-de-lys pattern in the middle of the forehead dividing the lines on the left and the right, which may be related to the double-serpents on the Tutankhamun mask. This insight is rather remarkable, and can be confirmed by a close examination of the paintings of actual Maori elders made during previous centuries.

Mr. Doutré also notes that there are a different number of dark blue stripes in the forehead portion of the Tutankhamun nemes on either side of the twin serpents -- five blue stripes on our left side if we are facing the mask, and four on the right. This fact can be perceived (barely) in the two screen shots from two YouTube videos of the Tutankhamun mask itself, below: 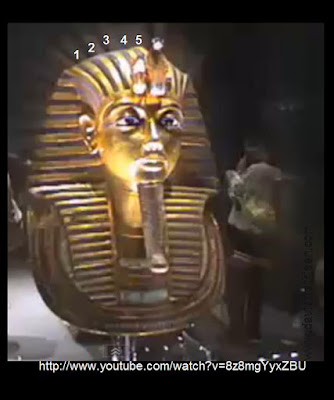 Above, the left side of the mask (as we face it) has five blue stripes of lapis lazuli above the forehead (numbered). For the original video of this, see here.

Below, the right side of the mask (as we face it) has four blue stripes of lapis lazuli above the forehead (numbered). For the original video of this, see here. 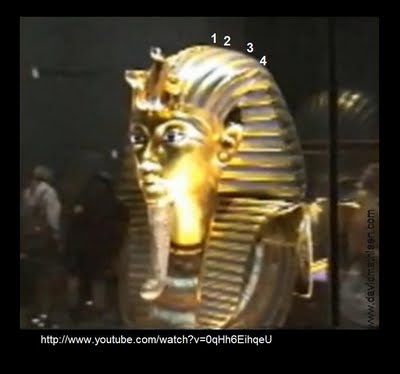 Mr. Doutré points out that the Maori mokos of the past often duplicated this imbalance in lines, and illustrates his point with a painting of a Maori man by English explorer and painter George French Angas (1822 - 1886). He notes that the moko in this painting has 13 dark lines and 14 lighter (non-tattooed) lines, which appear to correspond to the significant numbers found in the Tutankhamun mask, and to point to the same celestial significance. He also notes that the moko in the painting clearly has an additional dark band on one side of the forehead that is absent on the other side, just like the mask of Tutankhamun.

It must be pointed out that by no means did all mokos adhere to this pattern -- mokos were "as personal" to their owners "as a signature today," according to this web page discussing the portraits of Maori men and women done by Gottfried Lindauer (1839 - 1926). Many of the portraits he did, which can be seen online at this website (which also includes an excellent "zoom" feature allowing you to zoom in with high resolution onto the portraits), have the same number of tattooed bands on either side of the forehead (most often four on the right and four on the left). However, some do appear to have an uneven number, such as the portrait of Tamati Waka Nene (#48 of 69 in the gallery) and the portrait of Ratene Hihitawa (#40 of 69 in the gallery; this one is more difficult to ascertain whether the bands on either side of the forehead are different in number or not). Whatever the details of their mokos (and some do not have facial tattoos at all), all of the portraits are deeply moving for the way they convey the powerful dignity of their subjects.

Some might argue that the large number of mokos in that gallery that have symmetrical numbers of bands on the forehead disproves Mr. Doutré's argument, but it is certainly possible that by the late 1800s some elements of the moko that were present previously were no longer emphasized. Certainly the central pattern resembling a fleur-de-lys or caduceus is present on some mokos and not on others, and appears to have been ignored for most of the mokos, but this does not diminish the clear parallels with the twin serpents atop the Tutankhamun mask for the mokos in which it is in fact present.

Further, this observation of Mr. Doutré is by no means the only evidence he has found of some contact between the Maoris and the descendents of a very ancient civilization -- see some of the discussion in this previous post, for example. One possible source of this contact might have been the descendents of an ancient civilization that visited New Zealand in the centuries before Christ and stayed there until the Polynesian seafarers arrived in the 1200s AD; the recently-discovered skull of the Ruamahanga Woman represents another very strong piece of evidence in favor of that possibility. Certainly the Maori have many cultural characteristics in common with the Polynesian cultures elsewhere in the Pacific, but they also have other cultural characteristics that are completely unique, and may represent some contact with another culture that is overlooked by conventional history.

All these fascinating possibilities were completely unknown to me when I visited the treasures of the tomb of King Tutankhamun in 1979, but that visit made a lasting impression on me, and I am thankful to this day for the memory of it.